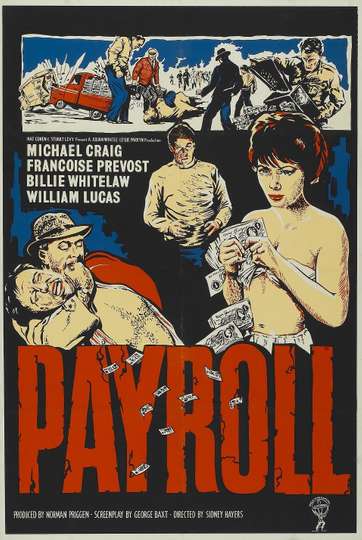 Yearning to watch 'Payroll' on your TV, phone, or tablet? Discovering a streaming service to buy, rent, download, or view the Sidney Hayers-directed movie via subscription can be tricky, so we here at Moviefone want to do the work for you.

Below, you'll find a number of top-tier streaming and cable services - including rental, purchase, and subscription choices - along with the availability of 'Payroll' on each platform when they are available. Now, before we get into the nitty-gritty of how you can watch 'Payroll' right now, here are some details about the Lynx Films Ltd. drama flick.

Released May 20th, 1962, 'Payroll' stars Michael Craig, Françoise Prévost, Billie Whitelaw, William Lucas The movie has a runtime of about 1 hr 45 min, and received a user score of 67 (out of 100) on TMDb, which put together reviews from 22 top users.

What, so now you want to know what the movie's about? Here's the plot: "A vicious gang of crooks plan to steal the wages of a local factory, but their carefully laid plans go wrong, when the factory employs an armoured van to carry the cash. The gang still go ahead with the robbery, but when the driver of the armoured van is killed in the raid, his wife plans revenge, and with the police closing in, the gang start to turn on each other." .