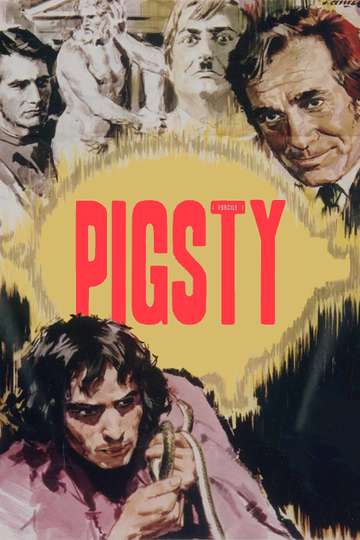 Looking to feast your eyes on 'Pigsty' on your TV, phone, or tablet? Discovering a streaming service to buy, rent, download, or watch the Pier Paolo Pasolini-directed movie via subscription can be tricky, so we here at Moviefone want to do the heavy lifting.

Below, you’ll find a number of top-tier streaming and cable services - including rental, purchase, and subscription alternatives - along with the availability of 'Pigsty' on each platform. Now, before we get into all the details of how you can watch 'Pigsty' right now, here are some specifics about the IDI Cinematografica, I Film Dell'Orso, Internazionale Nembo Distribuzione Importazione Esportazione Film (INDIEF), C.A.P.A.C. drama flick.

Released September 28th, 1969, 'Pigsty' stars Pierre ClÃ©menti, Jean-Pierre LÃ©aud, Alberto Lionello, Ugo Tognazzi The movie has a runtime of about 1 hr 39 min, and received a user score of 73 (out of 100) on TMDb, which put together reviews from 85 top users.

What, so now you want to know what the movie’s about? Here's the plot: "Two dramatic stories. In an undetermined past, a young cannibal (who killed his own father) is condemned to be torn to pieces by some wild beasts. In the second story, Julian, the young son of a post-war German industrialist, is on the way to lie down with his farm's pigs, because he doesn't like human relationships."

'Pigsty' is currently available to rent, purchase, or stream via subscription on Fandor .

The Gospel According to Matthew
This biblical drama focuses on the teachings of Jesus, including the p...

Masculin Féminin
Paul, a young idealist trying to figure out what he wants to do with h...

Salò, or the 120 Days of Sodom
Four corrupted fascist libertines round up 9 teenage boys and girls an...

The Decameron
A young Sicilian is swindled twice, but ends up rich; a man poses as a...

Medea
Based on the plot of Euripides' Medea. Medea centers on the barbarian...

A Pigeon Sat on a Branch Reflecting on Existence
An absurdist, surrealistic and shocking pitch-black comedy, which move...

The House of the Laughing Windows
A young restorer is commissioned to save a fresco representing the suf...