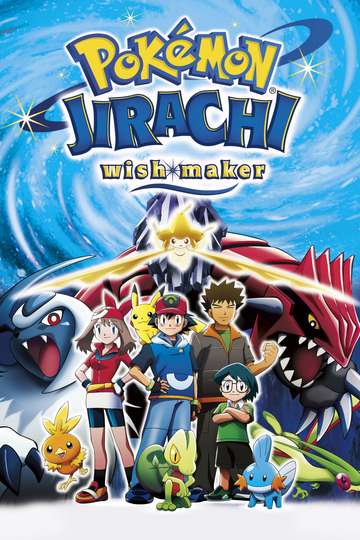 TMDb Score
65
NR 1 hr 21 minJun 1st, 2004Family, Action, Adventure, Animation, Science Fiction, Fantasy
Ash, May, Brock, and Max come upon the festival of the Wishing Star of Seven Nights. During their enjoyment, the legendary Pokemon--Jirachi, descends from the heavens and befriends Max. Jirachi, with the power to grant any wish, is sought after by many people wanting to claim its power. One man seeks to use its legendary power to revive an ancient Pokemon known as Groudon, unaware of the dangers hidden within Jirachi's powers
Show More
DirectorKunihiko Yuyama
StarringRica MatsumotoYuji UedaKAORI
Movie DetailsWhere to WatchFull Cast & Crew

Pokémon: Zoroark - Master of Illusions
Ash and his friends must stop a greedy media mogul from using the shap...

Pokémon the Movie: Genesect and the Legend Awakened
A group of five Genesect have invaded the big city and pose a threat t...

Pokémon: Arceus and the Jewel of Life
When the creator of the world, Arceus, comes to pass judgement on huma...

Pokémon the Movie: White - Victini and Zekrom
The Kingdom of the People of the Earth once ruled over the land, but n...

Pokémon: Giratina and the Sky Warrior
When Giratina is discovered to be able to create parallel dimensions,...

Pokémon: The Movie 2000
Satoshi must put his skill to the test when he attempts to save the wo...

Pokémon: The First Movie - Mewtwo Strikes Back
The adventure explodes into action with the debut of Mewtwo, a bio-eng...