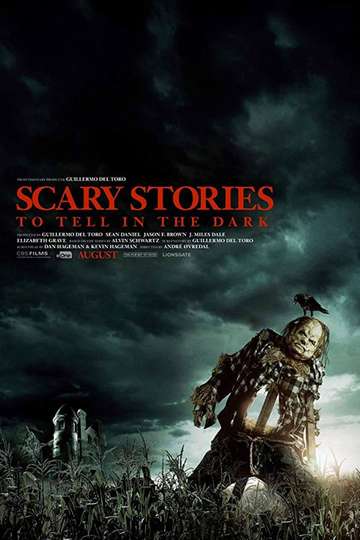 Need to watch 'Scary Stories to Tell in the Dark' on your TV, phone, or tablet? Tracking down a streaming service to buy, rent, download, or watch the André Øvredal-directed movie via subscription can be a huge pain, so we here at Moviefone want to do right by you.

Read on for a listing of streaming and cable services - including rental, purchase, and subscription choices - along with the availability of 'Scary Stories to Tell in the Dark' on each platform when they are available. Now, before we get into all the details of how you can watch 'Scary Stories to Tell in the Dark' right now, here are some specifics about the Starlight International Media, CBS Films, Entertainment One, 1212 Entertainment, Double Dare You Productions, Rolling Hills, Hivemind horror flick.

Released August 9th, 2019, 'Scary Stories to Tell in the Dark' stars Zoe Colletti, Dean Norris, Michael Garza, Gabriel Rush The PG-13 movie has a runtime of about 1 hr 48 min, and received a user score of 65 (out of 100) on TMDb, which assembled reviews from 2,158 well-known users.

You probably already know what the movie's about, but just in case... Here's the plot: "Mill Valley, Pennsylvania, Halloween night, 1968. After playing a joke on a school bully, Stella and her friends decide to sneak into a supposedly haunted house that once belonged to the powerful Bellows family, unleashing dark forces that they will be unable to control."

'Scary Stories to Tell in the Dark' Release Dates

Movies Like Scary Stories to Tell in the Dark

Child's Play
"More than a toy... he's your best friend."
The Meet-Cute
"Every hypothetical. Every scenario. Every alternative. It all leads back to you."

Annabelle Comes Home
"Possess them all"
In the Tall Grass
"Some places have a mind of their own."

The Curse of La Llorona
"She Wants Your Children."

Countdown
"Death? There's an app for that."

Good Boys
"You Must Be This Tall to See This Movie"
Doctor Sleep
"Dare to go back."
Eli

Us
"Watch yourself"
Dor
Hallam Foe
"This is my story"

Ready or Not
"In-laws will be the death of her."

Exclusive: Leave Your Legacy With This 'Book of Henry' Clip

This 'Under the Dome' Season 3 Trailer Takes Things Outside