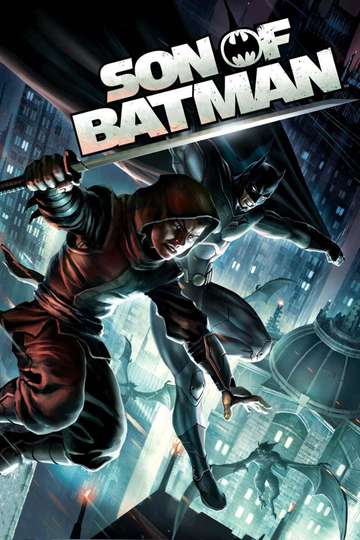 Want to watch 'Son of Batman' on your TV or mobile device at home? Hunting down a streaming service to buy, rent, download, or watch the Ethan Spaulding-directed movie via subscription can be a challenge, so we here at Moviefone want to do the heavy lifting.

We've listed a number of streaming and cable services - including rental, purchase, and subscription choices - along with the availability of 'Son of Batman' on each platform when they are available. Now, before we get into all the details of how you can watch 'Son of Batman' right now, here are some finer points about the DC Comics, Warner Bros. Animation, Warner Premiere, DC Entertainment action flick.

Released April 22nd, 2014, 'Son of Batman' stars Jason O'Mara, Stuart Allan, Thomas Gibson, Morena Baccarin The PG-13 movie has a runtime of about 1 hr 14 min, and received a user score of 70 (out of 100) on TMDb, which collated reviews from 884 experienced users.

Want to know what the movie's about? Here's the plot: "Batman learns he has a violent, unruly pre-teen son, secretly raised by the terrorist group known as The League of Assassins."

Batman: The Dark Knight Returns, Part 2
"Justice Returns... Vengeance Returns... Redemption Comes to Gotham."
Justice League: War
"A time when heroes became legends."
Superman vs. The Elite
"World saved. Humanity lost."
Batman: Bad Blood
"Justice runs in the family"
Justice League vs. Teen Titans
Batman: Assault on Arkham
"Get ready to root for the bad guys."
Justice League: Throne of Atlantis
"Blood is thicker than water."
Batman: Under the Red Hood
"Dare to Look Beneath the Hood."
Superman: Unbound
"The machine is coming"
Justice League: Doom
"The end of justice."
Teen Titans: The Judas Contract
Batman: The Dark Knight Returns, Part 1
"Old heroes never die. They just get darker."
Justice League: The Flashpoint Paradox
"Fight the future."
All Star Superman
"The measure of a man lies not in what he says, but what he does."
Justice League Dark
Batman: Year One
"A merciless crime turns a man into an outlaw."
Superman/Batman: Public Enemies
"No one is above the law."
Superman/Batman: Apocalypse
"The end is near."
Justice League: Crisis on Two Earths
"When Justice meets its match, worlds collide."
Batman vs. Robin
"The showdown that will define a destiny"
Justice League: Gods and Monsters
"From dark heroes, justice will dawn."