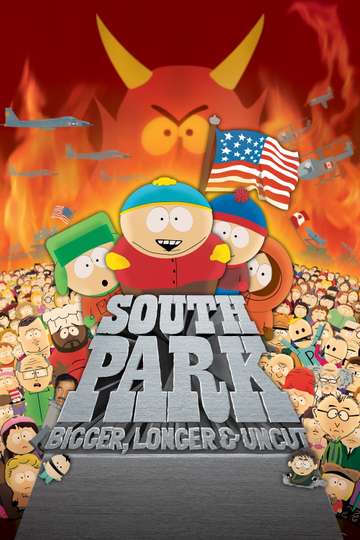 Need to watch 'South Park: Bigger, Longer & Uncut' on your TV, phone, or tablet? Searching for a streaming service to buy, rent, download, or watch the Trey Parker-directed movie via subscription can be challenging, so we here at Moviefone want to do the work for you.

We've listed a number of streaming and cable services - including rental, purchase, and subscription options - along with the availability of 'South Park: Bigger, Longer & Uncut' on each platform when they are available. Now, before we get into the various whats and wheres of how you can watch 'South Park: Bigger, Longer & Uncut' right now, here are some specifics about the Paramount, Warner Bros. Pictures, Scott Rudin Productions, Comedy Central, Comedy Central Films, South Park Studios animation flick.

Interested in knowing what the movie's about? Here's the plot: "When the four boys see an R-rated movie featuring Canadians Terrance and Philip, they are pronounced "corrupted", and their parents pressure the United States to wage war against Canada."

Team America: World Police
"Freedom Hangs By A Thread"
Adventure Time: Islands
Planes, Trains and Automobiles
"What he really wanted was to spend Thanksgiving with his family. What he got was three days with the turkey."
Smosh: Under the Influence

Anchorman: The Legend of Ron Burgundy
"They bring you the news so you don't have to get it yourself."
Beavis and Butt-Head Do Christmas
"Scrooge you!"
There's Something About Mary
"Love Is In The Hair."

The 40 Year Old Virgin
"The longer you wait, the harder it gets."
Step Brothers
"They grow up so fast."

The SpongeBob Movie: Sponge on the Run
"They're Not in Bikini Bottom Anymore."
Dumb and Dumber
"What the one doesn't have, the other is missing."

Alvin and the Chipmunks: The Squeakquel
"The Boys are back in town... and they have competition."
Tommy Boy
"If at first you don't succeed, lower your standards."

Superbad
"Come and get some!"

Why 'South Park' May 'Back Off' Political Satire in Trump Era