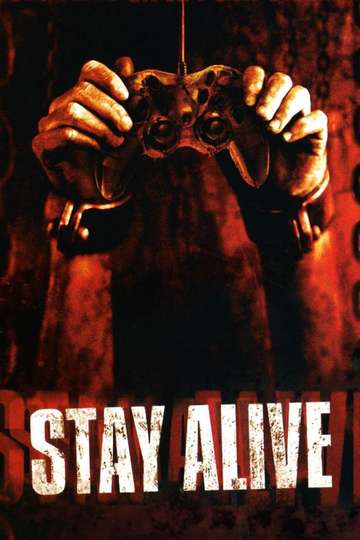 Want to watch 'Stay Alive' in the comfort of your own home? Hunting down a streaming service to buy, rent, download, or view the William Brent Bell-directed movie via subscription can be a challenge, so we here at Moviefone want to take the pressure off.

Read on for a listing of streaming and cable services - including rental, purchase, and subscription alternatives - along with the availability of 'Stay Alive' on each platform when they are available. Now, before we get into all the details of how you can watch 'Stay Alive' right now, here are some particulars about the Spyglass Entertainment, Hollywood Pictures, Wonderland Sound and Vision thriller flick.

Released March 24th, 2006, 'Stay Alive' stars Jon Foster, Samaire Armstrong, Frankie Muniz, Sophia Bush The PG-13 movie has a runtime of about 1 hr 25 min, and received a user score of 58 (out of 100) on TMDb, which compiled reviews from 609 respected users.

What, so now you want to know what the movie's about? Here's the plot: "After the mysterious, brutal death of an old friend, a group of teenagers find themselves in possession of "Stay Alive," an ultra-realistic 3-D videogame based on the spine-chilling true story of a 17th century noblewoman, known as "The Blood Countess." The gamers don't know anything about the game other than they're not supposed to have it... and they're dying to play it. Not able to resist temptation, the kids begin to play the grisly game but soon make a chilling connection -- they are each being murdered one-by-one in the same way as the characters they played in the game. As the line between the game world and the real world disappears, the teens must find a way to defeat the vicious and merciless Blood Countess, all the while trying to... stay alive."

Boogeyman
"You thought it was just a story."

Cry_Wolf
"Nobody believes a liar...even when they're telling the truth."
Turistas
"There are some places tourists should never go"
The Last House on the Left
"If someone hurt someone you love, how far would you go to get revenge?"
The Lodger
"Everyone is suspect."
The Shortcut
"Some urban legends are real"

The Messengers
"There is evidence to suggest that children are highly susceptible to paranormal phenomena. They see what adults cannot. They believe what adults deny. And they are trying to warn us."
Creep
"Your journey terminates here"
Shrooms
"Get ready to get wasted"
The Omen
"A new generation of terror"

Wolf Creek
"The thrill is in the hunt."

Pulse
"You are now infected."
Urban Legends: Bloody Mary
"Turn Off The Light And See What Happens."
Drive Thru
"At Hella Burger, It Won't Be The Food That Kills You... But You'll Wish It Did."
Club Dread
"A vacation to die for."
The Borderlands
"Evil has a new form."

Homecoming
"A girl never forgets her first love..."
One Missed Call
"What will it sound like when you die?"

Sorority Row
"The Sisters of Theta Pi Are Dying To Keep a Secret."