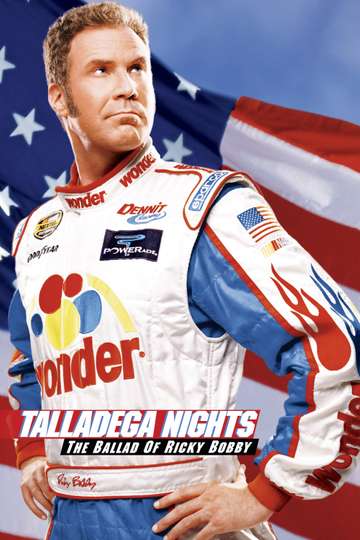 Looking to watch 'Talladega Nights: The Ballad of Ricky Bobby' on your TV or mobile device at home? Finding a streaming service to buy, rent, download, or watch the Adam McKay-directed movie via subscription can be difficult, so we here at Moviefone want to do the heavy lifting.

Read on for a listing of streaming and cable services - including rental, purchase, and subscription alternatives - along with the availability of 'Talladega Nights: The Ballad of Ricky Bobby' on each platform. Now, before we get into the nitty-gritty of how you can watch 'Talladega Nights: The Ballad of Ricky Bobby' right now, here are some specifics about the Relativity Media, Columbia Pictures, Apatow Productions, Mosaic Media Group, Sony Pictures, GH One, High, Wide and Handsome Inc. comedy flick.

What, so now you want to know what the movie’s about? Here's the plot: "The fastest man on four wheels, Ricky Bobby is one of the greatest drivers in NASCAR history. A big, hairy American winning machine, Ricky has everything a dimwitted daredevil could want, a luxurious mansion, a smokin' hot wife and all the fast food he can eat. But Ricky's turbo-charged lifestyle hits an unexpected speed bump when he's bested by flamboyant Euro-idiot Jean Girard and reduced to a fear-ridden wreck."

Movies Like Talladega Nights: The Ballad of Ricky Bobby

The Campaign
Two rival politicians compete to win an election to represent their sm...

Hype Nation
Ryan and Kevin and their crew from Los Angeles are hired by U.S. Inter...

The Other Guys
Unlike their heroic counterparts on the force, desk-bound NYPD detecti...

Wedding Crashers
John and his buddy, Jeremy are emotional criminals who know how to use...

Anchorman 2: The Legend Continues
With the 70s behind him, San Diego's top rated newsman, Ron Burgundy,...

Blades of Glory
When a much-publicized ice-skating scandal strips them of their gold m...