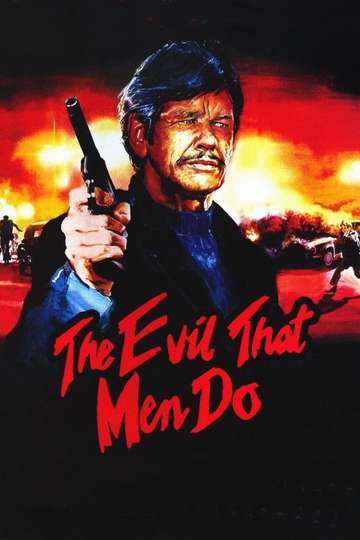 The Evil That Men Do (1984)Stream and Watch Online

Need to watch 'The Evil That Men Do' in the comfort of your own home? Tracking down a streaming service to buy, rent, download, or watch the J. Lee Thompson-directed movie via subscription can be a challenge, so we here at Moviefone want to do right by you.

We've listed a number of streaming and cable services - including rental, purchase, and subscription choices - along with the availability of 'The Evil That Men Do' on each platform. Now, before we get into all the details of how you can watch 'The Evil That Men Do' right now, here are some details about the Zuleika Farms, Capricorn, Producciones Cabo S.A., ITC thriller flick.

Released September 14th, 1984, 'The Evil That Men Do' stars Charles Bronson, José Ferrer, Theresa Saldana, Joseph Maher The R movie has a runtime of about 1 hr 30 min, and received a user score of 60 (out of 100) on TMDb, which put together reviews from 52 respected users.

Curious to know what the movie's about? Here's the plot: "Professional killer Holland is forced out of retirement to break a Central American government's political torture ring when one of his friends, a Latin American journalist, is killed. The murderer, Doctor Clement Molloch, is the master sadist behind the political torture of innocent victims. Posing as a journalist, Holland lures Molloch out of his fortress-like headquarters by using his murdered friend's wife and daughter as bait. When Holland kidnaps Molloch's sister, the doctor is led on a wild chase that takes him to an abandoned opal mine where he finally comes face to face with Holland."

'The Evil That Men Do' is currently available to rent, purchase, or stream via subscription on HBO Now, DIRECTV, HBO Max, and Amazon Video .

Murphy's Law
A tough police detective escapes from custody after being framed and a...

Breach of Faith: A Family of Cops II
The family of cops is back, this time dealing with the murder of a pri...

Breakheart Pass
At the height of the frontier era, a train races through the Rocky Mou...

The Mechanic
Arthur Bishop is a veteran hit man who, owing to his penchant for maki...