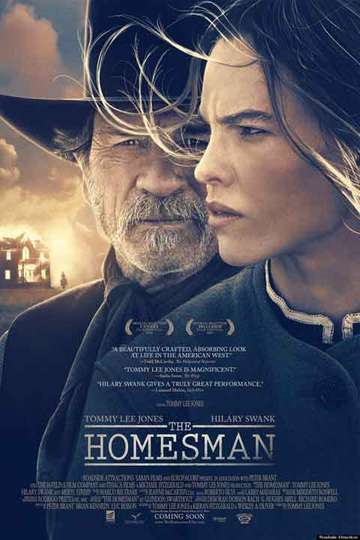 The Homesman (2014)Stream and Watch Online Yearning to watch 'The Homesman' on your TV or mobile device at home? Finding a streaming service to buy, rent, download, or watch the Tommy Lee Jones-directed movie via subscription can be challenging, so we here at Moviefone want to take the pressure off.

Below, you’ll find a number of top-tier streaming and cable services - including rental, purchase, and subscription options - along with the availability of 'The Homesman' on each platform. Now, before we get into all the details of how you can watch 'The Homesman' right now, here are some specifics about the The Javelina Film Company, EuropaCorp, Ithaca Pictures drama flick.

Released August 29th, 2014, 'The Homesman' stars Hilary Swank, Tommy Lee Jones, Grace Gummer, Miranda Otto The R movie has a runtime of about 2 hr 2 min, and received a user score of 66 (out of 100) on TMDb, which put together reviews from 612 experienced users.

Interested in knowing what the movie's about? Here's the plot: "When three women living on the edge of the American frontier are driven mad by harsh pioneer life, the task of saving them falls to the pious, independent-minded Mary Bee Cuddy. Transporting the women by covered wagon to Iowa, she soon realizes just how daunting the journey will be, and employs a low-life drifter, George Briggs, to join her. The unlikely pair and the three women head east, where a waiting minister and his wife have offered to take the women in. But the group first must traverse the harsh Nebraska Territories marked by stark beauty, psychological peril and constant threat."

Arn: The Knight Templar
Arn, the son of a high-ranking Swedish nobleman is educated in a monas...

The Salvation
In 1870s America, a peaceful American settler kills his family's murde...

The Selfish Giant
A hyperactive boy and his best friend, a slow-witted youth with an aff...

Slow West
In the Old West, a 17-year-old Scottish boy teams up with a mysterious...