This week, directors Gita Pullapilly and Aron Gaudet talk about their crime comedy ‘Queenpins’ and recommend the work of Kimberly Peirce and Patty Jenkins. 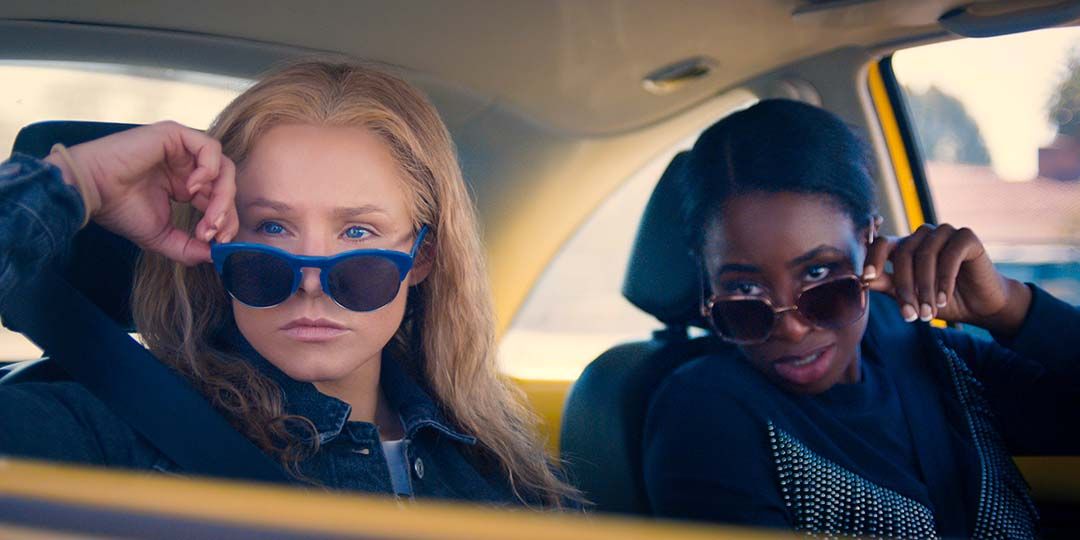 Born in South Bend, Indiana, Gita Pullapilly studied finance at University of Notre Dame and later journalism at the Medill School of Journalism, Northwestern University. She met her future husband and creative collaborator Aron Gaudet while producing his documentary ‘The Way We Get By’. The two have collaborated on multiple projects and were jointly appointed Guggenheim Fellows in 2015. ‘Queenpins’ is their second narrative feature film together, following their 2013 festival hit ‘Beneath the Harvest Sky.’

‘Queenpins’ is now playing in select Cinemark Theaters nationwide, and will be available streaming on Paramount+ on September 30.

Pullapilly and Gaudet talked to Moviefone about their new movie.

Moviefone: Can you talk about your collaboration process?

Aron Gaudet: ...we wake up in bed together, and everything we do is basically together.

Gaudet: When we write, it’s not like we send the script back and forth together. We’re right next to each other. Every word is gone over and agreed upon, going into the script.

Pullapilly: Very much, our work is like marriage therapy. We do a lot to try to heal ourselves from our childhood issues, to be able to get down to a spot where we can write together and direct together and really challenge each other in productive ways, so we can get the best version of that movie out there.

Pullapilly: I think one thing, when we are writing on our laptop, we have to be open to each other’s ideas. Because that is the first time on a story that Aron and I have to have our perspectives melded together. We have to be open to that, and we have to understand whose idea is the journey we want to go down for whatever that scene is or whatever we’re trying to craft. That’s the first step for us: being open to each other’s ideas. Then, once we are on set, we really own that concept because any idea that is going to make that film the best version of the film is going to be an opportunity for us to make that best version of the movie. Whether it’s from a gaffer or anybody else, we are super excited to hear it because it only means that they are that much more invested in the movie, but also that makes for the better movie.

MF: You came across this story on a coupon blog. How did you fall down that rabbit hole?

Pullapilly: So many stories that are told are optioned very quickly in Hollywood, and we aren’t ever in the position where we can option those, or we just weren’t in on the game earlier enough to have access to them. Much of what Aron and I do is taking deep dives on the internet trying to find stories out there that haven’t been told, need to be told, and are so unique and interesting that they resonate with us in some way. I don’t know how I got on the coupon blog, but I saw three sentences that talked about this “counterfeit coupon caper” and “$40 million” and it happened to have the name of the detective from Arizona in the article. I shared it with Aron, and we thought there was something unique and special here, so we reached out to the detective, and he was fascinating, and we drove to Phoenix to spend more time with him and hear more of the story.

MF: How did Kristen Bell come on board?

Gaudet: Early on, once we had a finished script, she was on a very short list of people that we thought would be right for the role of Connie. We knew that Connie in the movie is a definite go-getter. She’s a former Olympian, and she has a lot of ambition and drive, but also she ends up doing bad things. Kristen when we sat down with her, one of the first things she said was that for some reason even if she’s doing things like committing crimes, audiences still love her doing those things. That was exactly what we needed in Connie. Somebody who had this go-getter mentality, who was extremely likeable even if they were committing crimes and breaking laws.

MF: In the real story was she a racewalker?

Gaudet: No. We really don’t know much about the real women. We took the framework of the coupon scam - what happened, how they did it, and what they did when they made all this money - and then we just completely created characters. That’s why it’s more inspired by the story. The characters are complete creations.

Pullapilly: We wanted the two women to represent so much of what we as women are going through in society today, feeling boxed in and trapped and not being able to find the loopholes to break out and succeed. We felt like to do that, we wanted to create our own characters.

MF: Did you also develop the YouTube aspect of JoJo?

Gaudet: Yeah, as we did a deep dive into the world of coupons and the world of extreme couponing, we would watch just tons of YouTube videos of these extreme couponers. We latched onto a couple that we were really interested in. We would just watch their videos over and over. They would talk you through their stockpile room, or how they clip their coupons and organize them. We started basing JoJo off of some of them. We knew she had to have her YouTube channel and her whole brand going.

Pullapilly: The couponing videos are really fantastic. You can go down a big rabbit hole of watching so many of them because they are so interesting and unique, and then you see all the deals they're getting, and you’re like wow this is incredible.

MF: I read that 96% of Americans use coupons. Do you know what percentage of that are competitive couponers?

Gaudet: It’s probably a small percentage that do extreme couponing, but as far as using coupons in their lives, yeah it’s a lot. What we realized is it’s really the foundation of the U.S. economy, coupons.

Pullapilly: What we realized is there is the question, is it a need or a want? And that really determines if someone is going to buy something or not. But a coupon eradicates that question.

Gaudet: It tips it to a need.

Pullapilly: It tips it to a need, even though it’s most likely a want.

Gaudet: It puts a ticking clock on it. There’s a whole psychology behind coupons and coupon use, and we were fascinated by all of that. There were stories that we would read like the CEO of JCPenney got rid of coupons and just wanted to do everyday low pricing and almost bankrupted the company. They lost $4 billion dollars because he got rid of coupons. There is that feeling that not everyone is an extreme couponer, but they like the idea that they can get a deal.

MF: Can you talk about the various shooting locations given the COVID protocols?

Gaudet: It was very constricted because twenty-two of our thirty shoot days ended up being on this one campus that is an abandoned health facility. A lot of those locations were really just finding areas on this campus where we could create another location. There are a lot of locations, but it was a lot of movie magic to make it the world during the pandemic. We knew we had to keep people safe and create a bubble to work in, while not sacrificing story. We never wanted it to feel like a movie that was made during the pandemic, but it was a challenge every day to pull that off.

MF: Was the location of their coupon warehouse also on that campus?

Gaudet: Yeah, that’s on that campus as well.

Gaudet: We found every small nook and took advantage of it. We were able to do a couple of days at a grocery store and a day at the airplane hangar. But the heart of the movie was all shot on this one campus.

Pullapilly: I don’t think anyone realized how many different looks we pulled off. Our production designer ​​Jennifer Klide did an incredible job of trying to be as creative with such a limited budget to work with to find ways to make everything look different.

Pullapilly: And they’re baddasses. You should see some of the videos online of postal inspectors. They’re incredible.

Gaudet: They took down the Unabomber. They are involved in a lot of big cases because so many crimes involve the mail. It was us realizing that these guys are badass, but they’re not viewed that way, and there is comedy to be had there. Vince’s character comes in justice is very much his core value, but everyone else around him is like, wait, what’s a postal inspector?

MF: Can you recommend another film directed or co-directed by a woman for viewers to seek out?

Pullapilly: I think Kimberly Peirce who directed ‘Boys Don’t Cry,’ is an amazing filmmaker. I think what she did with that movie is spectacular because it opened my eyes to a world I didn’t know before. It was so raw and real that it moved me profoundly and inspired me to want to push the limits of storytelling, to be able to make an impact on the lives of other people. I admire her greatly.

Gaudet: I think what is excited to us is to see somebody like Patty Jenkins who goes from smaller films like we’ve started at, to something like ‘Wonder Woman’ but on her own terms. We’re always looking for directors to admire who do that - go from a smaller budget to a bigger budget, but do it on their own terms and still bring their own vision to it. That’s always inspiring.

Inspired by the brutal murder of Brandon Teena, a trans man living in rural Nebraska, Peirce’s breaktrhough drama received critical acclaim and Hilary Swank won the Oscar win for Best Actress. Although its approach and cisgender casting is dated now, the film was a watershed moment for trans representation in cinema upon its release.

Before breaking records with her pair of Wonder Woman films for DC, Jenkins wrote and directed this powerful drama inspired by the real-life story of serial killer Aileen Wuornos. The film was released to wide-spread critical acclaim, and Charlize Theron won the Oscar for Best Actress for her complex portrayal of Wuornos.