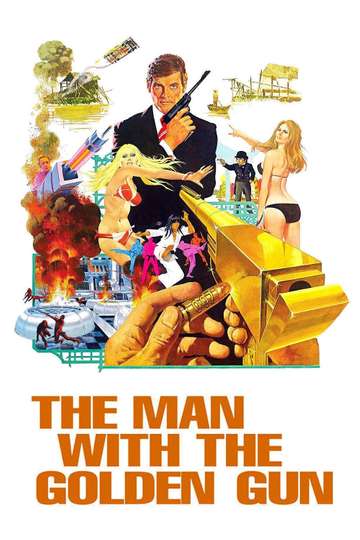 The Man with the Golden Gun (1974)Stream and Watch Online

Looking to watch 'The Man with the Golden Gun' in the comfort of your own home? Discovering a streaming service to buy, rent, download, or watch the Guy Hamilton-directed movie via subscription can be confusing, so we here at Moviefone want to take the pressure off.

Read on for a listing of streaming and cable services - including rental, purchase, and subscription options - along with the availability of 'The Man with the Golden Gun' on each platform when they are available. Now, before we get into the nitty-gritty of how you can watch 'The Man with the Golden Gun' right now, here are some specifics about the United Artists, Eon Productions, Danjaq thriller flick.

Released December 18th, 1974, 'The Man with the Golden Gun' stars Roger Moore, Christopher Lee, Britt Ekland, Maud Adams The PG movie has a runtime of about 2 hr 5 min, and received a user score of 64 (out of 100) on TMDb, which put together reviews from 1,571 well-known users.

Want to know what the movie's about? Here's the plot: "Cool government operative James Bond searches for a stolen invention that can turn the sun's heat into a destructive weapon. He soon crosses paths with the menacing Francisco Scaramanga, a hitman so skilled he has a seven-figure working fee. Bond then joins forces with the swimsuit-clad Mary Goodnight, and together they track Scaramanga to a tropical isle hideout where the killer-for-hire lures the slick spy into a deadly maze for a final duel."

'The Man with the Golden Gun' Release Dates

Tomorrow Never Dies
"Yesterday is a memory. Today is history. Tomorrow is in the hands of one man."
A View to a Kill
"Has James Bond finally met his match?"
Licence to Kill
"James Bond is out on his own and out for revenge."
Never Say Never Again
"Sean Connery is James Bond 007"
For Your Eyes Only
"No one comes close to James Bond, 007."
Moonraker
"Where all the other Bonds end, this one begins!"
The Living Daylights
"Living on the Edge"

Die Another Day
"He's never been cooler."
Octopussy
"James Bond's all time high."
Dr. No
"Now meet the most extraordinary gentleman spy in all fiction!"
Diamonds Are Forever
"The man who made 007 a household number."
Life with Mikey
"He's a talent agent. She's a thief. Looks like they've already got something in common."
On Her Majesty's Secret Service
"Far up! Far out! Far more! James Bond 007 is back!"
GoldenEye
"No limits. No fears. No substitutes."
The Spy Who Loved Me
"It's the BIGGEST. It's the BEST. It's BOND. And B-E-Y-O-N-D."
Thunderball
"Look up! Look down! Look out!"
From Russia with Love
"The world's masters of murder pull out all the stops to destroy Agent 007!"
Live and Let Die
"Roger Moore as James Bond."
Goldfinger
"Everything he touches turns into excitement!"
The World Is Not Enough
"As the countdown begins for the new millennium there is still one number you can always count on."
You Only Live Twice
"You Only Live Twice... and Twice is the only way to live!"

Every James Bond Movie, Ranked From 'Dr. No' to 'Spectre'