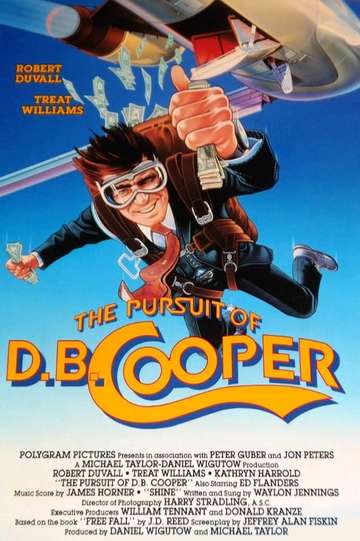 The Pursuit of D.B. Cooper (1981)Stream and Watch Online

Yearning to watch 'The Pursuit of D.B. Cooper' on your TV or mobile device at home? Finding a streaming service to buy, rent, download, or view the Roger Spottiswoode-directed movie via subscription can be challenging, so we here at Moviefone want to take the pressure off.

We've listed a number of streaming and cable services - including rental, purchase, and subscription options - along with the availability of 'The Pursuit of D.B. Cooper' on each platform. Now, before we get into the various whats and wheres of how you can watch 'The Pursuit of D.B. Cooper' right now, here are some finer points about the Universal Pictures crime flick.

Released November 13th, 1981, 'The Pursuit of D.B. Cooper' stars Robert Duvall, Treat Williams, Kathryn Harrold, Ed Flanders The PG movie has a runtime of about 1 hr 40 min, and received a user score of 53 (out of 100) on TMDb, which assembled reviews from 14 well-known users.

You probably already know what the movie's about, but just in case... Here's the plot: "A speculation on the fate of the famous hijacker who parachuted with his ransom and disappeared in the mountains. Has Cooper succeeded in following a meticulous plan to disappear into anonymity despite the best efforts of a dogged cop?"