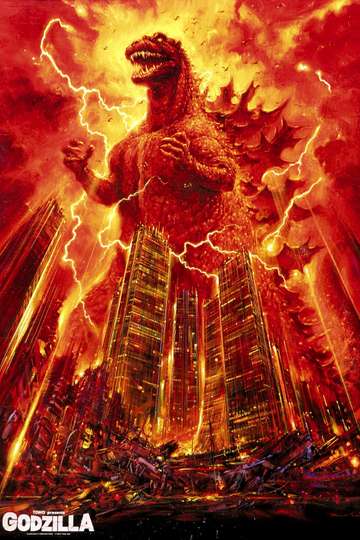 The Return of Godzilla (2016)Stream and Watch Online

Need to watch 'The Return of Godzilla' on your TV, phone, or tablet? Tracking down a streaming service to buy, rent, download, or watch the Koji Hashimoto-directed movie via subscription can be difficult, so we here at Moviefone want to do right by you.

We've listed a number of streaming and cable services - including rental, purchase, and subscription choices - along with the availability of 'The Return of Godzilla' on each platform when they are available. Now, before we get into the fundamentals of how you can watch 'The Return of Godzilla' right now, here are some specifics about the Toho Pictures, Inc. science fiction flick.

Released September 13th, 2016, 'The Return of Godzilla' stars Ken Tanaka, Yasuko Sawaguchi, Yōsuke Natsuki, Keiju Kobayashi The movie has a runtime of about 1 hr 43 min, and received a user score of 75 (out of 100) on TMDb, which put together reviews from 102 experienced users.

Want to know what the movie's about? Here's the plot: "After a fishing boat is attacked, the sole surviving crew member realizes it is none other than a resurrected Godzilla. However, efforts to bring the story to light are suppressed by the Japanese government amid growing political tensions between the United States and the Soviet Union, who are both willing to bomb Japan to stop the monster." .

'The Return of Godzilla' Release Dates

Son of Godzilla
"A great duel against a new monster by a parent-child combination!"
Ebirah, Horror of the Deep
"Atrocious new monster Ebirah!"
Mothra vs. Godzilla
"What is it … How much terror can you stand?"
Godzilla vs. Megalon
"Dreaded Megalon from the undersea kingdom!"
Terror of Mechagodzilla
"Mechagodzilla has been resurrected!"
Godzilla vs. Mechagodzilla
"Flying through space and firing missiles! A dreadful Godzilla, whose whole body is a weapon, appears!"
Godzilla, Mothra and King Ghidorah: Giant Monsters All-Out Attack
"The God of Destruction Godzilla lands in Japan!"
All Monsters Attack
"A Godzilla father-son crisis: the furious new monster Gabara appears, taking aim at the throne of Monster Island!"
Godzilla vs. Hedorah
"The Smog Monster Hedorah arrives in a shooting star!"
Godzilla Raids Again
"The great story of the terrifying spirits that rampage through Japan!"
Ghidorah, the Three-Headed Monster
"Space Super Monster (King Ghidorah) attacks the Earth!"
Godzilla vs. King Ghidorah
"At the end of the century, the greatest battle has begun!"
Godzilla vs. Biollante
"The winner of this battle would be the most enormous enemy against human beings."
Godzilla vs. Destoroyah
"It's a major monster meltdown!"
Invasion of Astro-Monster
"Ruler of the universe Planet X"
Godzilla vs. Gigan
"Defeat the evil space monsters! You can protect the Earth, Godzilla!"
Godzilla 2000: Millennium
"Witness! A new era of Godzilla!"
Destroy All Monsters
"The mysterious Kilaaks appear! Shaking the universe, the great battle of 11 monsters!"
Godzilla vs. Mechagodzilla II
"The Birth of the End of the Century Tyrant."
Godzilla vs. SpaceGodzilla
"Destruction Deity Descent!"
Godzilla vs. Mothra
"Earth S.O.S.! The battle over the future of the human race begins."