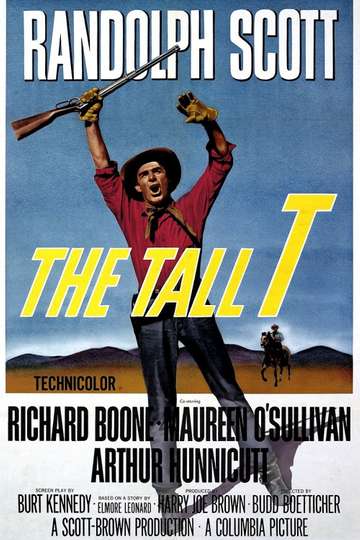 Yearning to watch 'The Tall T' in the comfort of your own home? Tracking down a streaming service to buy, rent, download, or view the Budd Boetticher-directed movie via subscription can be a challenge, so we here at Moviefone want to take the pressure off.

We've listed a number of streaming and cable services - including rental, purchase, and subscription options - along with the availability of 'The Tall T' on each platform. Now, before we get into the various whats and wheres of how you can watch 'The Tall T' right now, here are some finer points about the Columbia Pictures western flick.

Released April 2nd, 1957, 'The Tall T' stars Randolph Scott, Richard Boone, Maureen O'Sullivan, Arthur Hunnicutt The movie has a runtime of about 1 hr 18 min, and received a user score of 71 (out of 100) on TMDb, which assembled reviews from 75 respected users.

Want to know what the movie's about? Here's the plot: "Having lost his horse in a bet, Pat Brennan hitches a ride with a stagecoach carrying newlyweds, Willard and Doretta Mims. At the next station the coach and its passengers fall into the hands of a trio of outlaws headed by a man named Usher. When Usher learns that Doretta is the daughter of a rich copper-mine owner, he decides to hold her for ransom. Tension builds over the next 24 hours as Usher awaits a response to his demands and as a romantic attachment grows between Brennan and Doretta."

Where Eagles Dare
World War II is raging, and an American general has been captured and...

True Grit
The murder of her father sends a teenage tomboy on a mission of 'justi...

The Shootist
Afflicted with a terminal illness John Bernard Brooks, the last of the...

Ben-Hur
In 25 AD,Judah Ben-Hur, a Jew in ancient Judea, opposes the occupying...