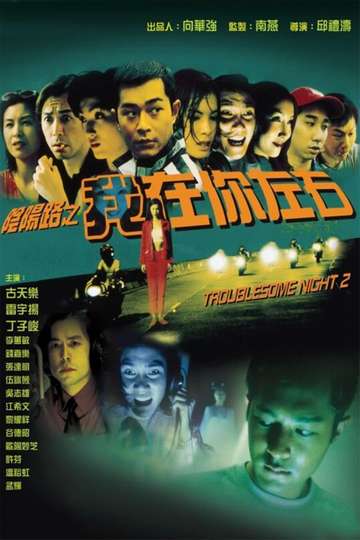 TMDb Score
35
NR 1 hr 36 minComedy, Horror, Thriller
The second chapter of the "Troublesome Night" series, this movie consists of three stories. The first story is about a girl that called a radio show for advice and comfort after her boyfriend died tragically. One of the station DJs unconsciously suggested that she should commit suicide if she wants to be reunited with her beau. Unfortunately, the girl takes the suggestion and the DJ becomes racked with guilt as the girl's ghost returns to haunt him. The second story is about a group of friends voyage to the sea. During the trip, they encountered mysterious events after they rescued an eerie woman from a boat wreckage. The third story is about another DJ that quit his job after the untimely deaths of his co-workers. To escape the pain, he becomes a street racer. But, his thrill rides were hindered when he stumbled upon a sinister spirit by the roadside
Show More
DirectorHerman Yau
StarringLouis KooSimon LuiAllen Ting
Full Cast & Crew