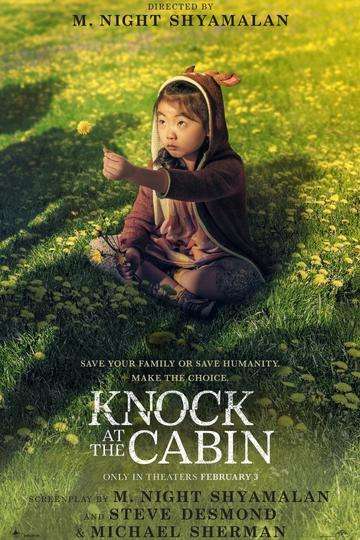 Knock at the Cabin (2023)Stream and Watch Online

Fancy watching 'Knock at the Cabin' in the comfort of your own home? Finding a streaming service to buy, rent, download, or watch the M. Night Shyamalan-directed movie via subscription can be difficult, so we here at Moviefone want to help you out.

Read on for a listing of streaming and cable services - including rental, purchase, and subscription choices - along with the availability of 'Knock at the Cabin' on each platform when they are available. Now, before we get into the nitty-gritty of how you can watch 'Knock at the Cabin' right now, here are some details about the Blinding Edge Pictures, Universal Pictures horror flick.

Released February 3rd, 2023, 'Knock at the Cabin' stars Jonathan Groff, Ben Aldridge, Dave Bautista, Rupert Grint The movie has a runtime of about , and received a user score of (out of 100) on TMDb, which put together reviews from knowledgeable users.

Curious to know what the movie's about? Here's the plot: "A couple named Andrew and Eric and their adopted daughter, Wen, are taking a vacation in a secluded cabin in New Hampshire. Their dwelling is invaded by four strangers named Redmond, Leonard, Sabrina, and Adriane who take the family captive and tell them that, to prevent the upcoming apocalypse, one of them must be killed by the others." .

'Knock at the Cabin' Release Dates