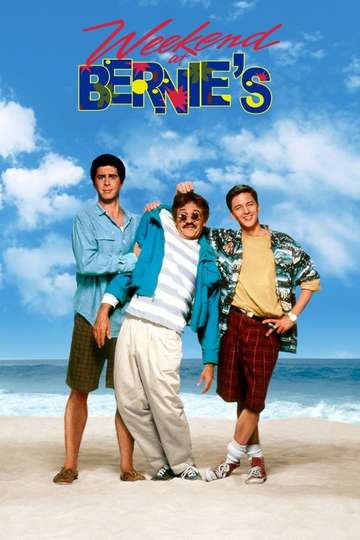 Need to watch 'Weekend at Bernie's' in the comfort of your own home? Finding a streaming service to buy, rent, download, or view the Ted Kotcheff-directed movie via subscription can be difficult, so we here at Moviefone want to take the pressure off.

We've listed a number of streaming and cable services - including rental, purchase, and subscription choices - along with the availability of 'Weekend at Bernie's' on each platform. Now, before we get into the nitty-gritty of how you can watch 'Weekend at Bernie's' right now, here are some details about the Gladden Entertainment, 20th Century Fox comedy flick.

Released July 5th, 1989, 'Weekend at Bernie's' stars Andrew McCarthy, Jonathan Silverman, Catherine Mary Stewart, Terry Kiser The PG-13 movie has a runtime of about 1 hr 37 min, and received a user score of 64 (out of 100) on TMDb, which assembled reviews from 711 knowledgeable users.

You probably already know what the movie's about, but just in case... Here's the plot: "Two friends are invited for a weekend to a luxury island with their boss. The boss gets shot and nobody seems to notice, except for the two friends. In order not to become suspects of murder they treat the body as a puppet and make people believe he's still alive. The killer wants to do his job so when he is informed that the stiff is still alive he's got to shoot him again, and again, and again."

The Freshman
After a film student gets his belongings stolen, he meets a mobster be...

The Great Outdoors
It's vacation time for outdoorsy Chicago man Chet Ripley, along with h...

Revenge of the Nerds
At Adams College, the jocks rule the school from their house on high,...

My Giant
Billy Crystal plays a Hollywood agent who stumbles upon Max, a giant l...

Who's Harry Crumb?
Harry Crumb is a bumbling and inept private investigator who is hired...

Major League
When Rachel Phelps inherits the Cleveland Indians from her deceased hu...

Spies Like Us
Two bumbling government employees think they are U.S. spies, only to d...