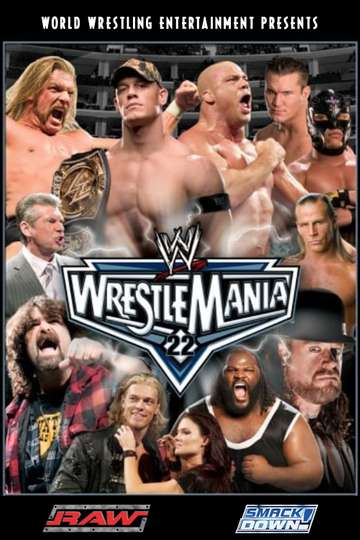 Fancy watching 'WWE WrestleMania 22' in the comfort of your own home? Discovering a streaming service to buy, rent, download, or view the Kevin Dunn-directed movie via subscription can be confusing, so we here at Moviefone want to take the pressure off.

Read on for a listing of streaming and cable services - including rental, purchase, and subscription alternatives - along with the availability of 'WWE WrestleMania 22' on each platform. Now, before we get into all the details of how you can watch 'WWE WrestleMania 22' right now, here are some finer points about the World Wrestling Entertainment (WWE), WWE Home Video action flick.

Released April 2nd, 2006, 'WWE WrestleMania 22' stars Paul Michael LÃ©vesque, John Cena, Kurt Angle, Ã“scar GutiÃ©rrez Rubio The movie has a runtime of about 4 hr, and received a user score of 79 (out of 100) on TMDb, which put together reviews from 22 experienced users.

You probably already know what the movie's about, but just in case... Here's the plot: "WrestleMania 22 was the twenty-second annual WrestleMania PPV. It was presented by Snickers and took place on April 2, 2006 at the Allstate Arena in the Chicago suburb of Rosemont, Illinois. The main match on the Raw brand was John Cena versus Triple H for the WWE Championship. The predominant match on the SmackDown! brand was a Triple Threat match for the World Heavyweight Championship between Kurt Angle, Rey Mysterio, and Randy Orton. Featured matches on the undercard included a No Holds Barred match between Shawn Michaels and Vince McMahon, a Casket match between The Undertaker and Mark Henry, a WWE Women's Championship match between Mickie James and Trish Stratus and an interpromotional Money in the Bank ladder match featuring six participants. Tickets sold out in under two minutes, grossing US$2.5 million for the event, making it the highest grossing one-day event at the Allstate Arena. More than 17,155 people attended, with millions more watching in more than 90 countries."

'WWE WrestleMania 22' is currently available to rent, purchase, or stream via subscription on WWE Network .

WWE Wrestlemania XXVI
WrestleMania XXVI was the twenty-sixth annual WrestleMania PPV and was...