Brad Pitt stars as an unlucky assassin on a train filled with killers and criminals that emphasizes fighting style over substance. 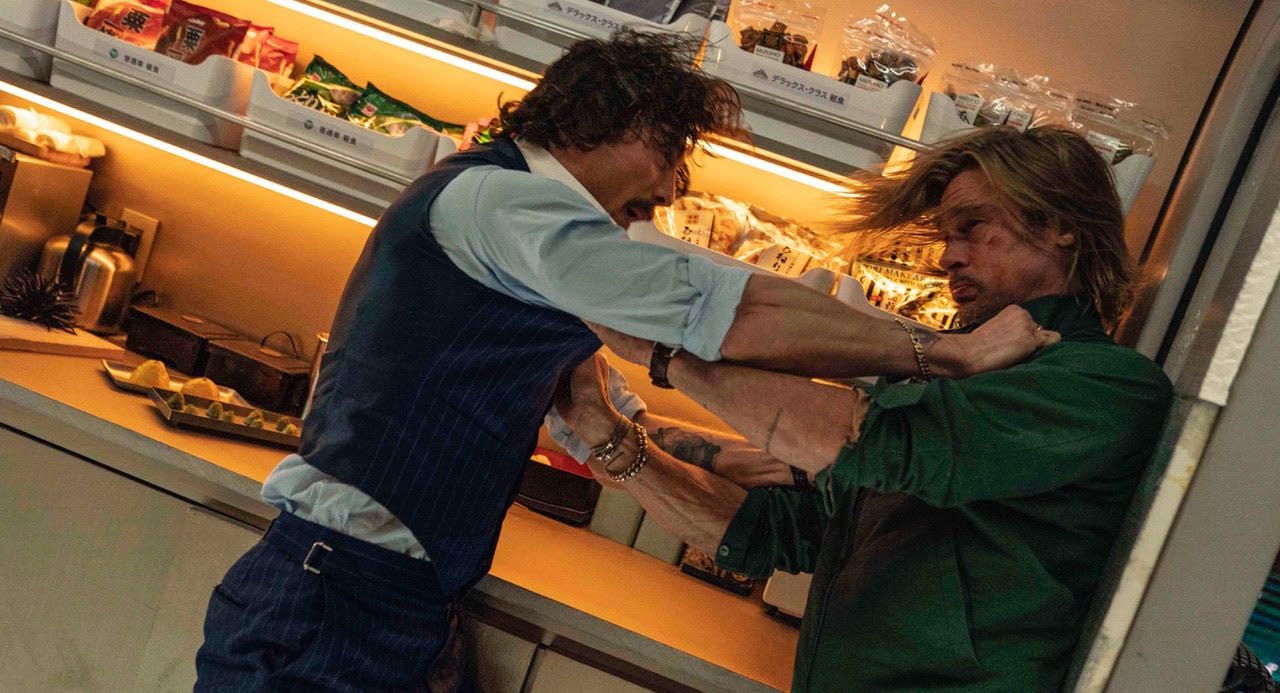 ‘Bullet Train’, which opens in theaters today, looks to add some violent fun to a summer movie season that hasn’t had too many original films on its schedule.

Which isn’t to say that the movie is completely original, as Zak Olkewicz’ script adapts Kôtarô Isaka’s novel ‘Maria Beetle’.

Yet in the hands of ‘Deadpool 2’, ‘Atomic Blonde’ and ‘Fast & Furious Presents: Hobbs & Shaw’ director David Leitch, it becomes a stylized blend of hitman action, crossed coincidences and over-explained backstories.

Anchored by a laconic but funny performance from Brad Pitt, ‘Bullet Train’ is the story of Ladybug, an assassin who got out of the game and sought out a therapist after bad luck seemed to haunt his every job. Now, he’s back and looking for a relatively easier job for his first new assignment.

His handler, Maria (Sandra Bullock, who is primarily heard over a phone line) assures him that grabbing a briefcase from a bullet train and getting off at the next station should offer him no real challenge.

Of course, it doesn’t work out that way at all. Turns out, the briefcase has connections to the kidnapping of a lethal crime lord’s son (Michael Shannon is the boss known as “White Death”, while Logan Lerman is his slacker kid), and a variety of other assassins.

Prime among them are Lemon (Brian Tyree Henry) and Tangerine (Aaron Taylor-Johnson), adoptive siblings who are also two of the most notorious hitmen around, who have rescued Lerman’s character and retrieved the ransom money – which is in the briefcase Ladybug has been sent to grab.

Elsewhere on the train is Kimura (Andrew Koji), looking for revenge on the person who injured his son, The Prince (Joey King), a young woman who uses her youth as a weapon as much as any gun or knife, The Wolf (Benito A Martínez Ocasio), with his own vengeful quest and The Hornet (Zazie Beetz), with a specific target for her poisonous talents.

With Leitch in charge of the chaos (it’s worth remembering that he, along with Chad Stahelski, helped turn Keanu Reeves into a badass assassin for the first ‘John Wick’ movie), ‘Bullet Train’ is naturally crammed with inventive action. Leitch has spent his career performing stunts, coordinating them and now directing them and he knows how to craft a fun sequence that in places has echoes of Jackie Chan’s use of props as weapons.

There has also clearly been a lot of training involved, so the cast (and their stunt teams) throw themselves into the various fights and plot turns. It’s diverting to see the likes of Brian Tyree Henry, not normally known for his action work, give it their all.

Leitch and co., meanwhile have built a slick-looking set that keeps the action condensed and focused, cinematographer Jonathan Sela’s camera roaming the aisles and, later in the movie, heading outside the train to follow the combat as characters

Where it all goes off the rails (literally, at one point) is in the characters. Though some are handed backgrounds (Taylor-Johnson and Henry in particular), mostly the movie lets fists fill in the details.

The problem with prioritizing fight scenes over story is that the latter can’t completely carry the former, and when you have an entire sequence explaining how a water bottle came to be crucial to the plot and yet seems to rely on coincidence to make it work, you’re in trouble.

This is a movie that is all surface and little substance, and while that’s not the sort of dilemma that troubles summer movie audiences too much, ‘Bullet Train’ starts to feel like a numbing collection of traits, quirks and insults, like a movie conceived by some teenagers who figured they could write the ultimate script with all the stabbing, shooting, punches and kicks they could put into one movie.

Cliches crop up all over the place, including the henchman who show up at every station to threaten Ladybug and co., snarling about handing over the briefcase (which serves as a McGuffin in more ways than one).

And given the Japanese setting, it leans heavily on cliched iconography and the movie is relatively light on Asian faces. When they do appear, they’re given stereotypical roles and dialogue, while the Westerners (there a few fake British accents here among the Americans) get the lion’s share of the screen time.

Everyone is clearly having a blast beating each other up or figuring out how to survive as the train speeds to its destination, but while that’s fun for a while, it doesn’t always translate to the whole journey of the movie.

Pitt makes a solid stab at breathing life into Ladybug, who is obsessed with fate and luck, and really would rather not get into scraps (but is very adept when he does). And his chemistry with old real-life friend Bullock overcomes the fact that she’s largely off screen.

Likewise Taylor-Johnson and Henry, who generate real squabbling sibling energy but can’t quite make their characters feel more than archetypes. And King (despite some accent issues) makes for a cold, calculating killer.

Shannon gets to parlay his steely menace effectively, making the most of a relatively brief screen time allotment.

The likes of Ocasio (normally found performing in the music sphere as Bad Bunny) and Hiroyuki Sanada (who plays Koji’s character’s father) are largely wasted in nothing roles.

There are also a couple of big celebrity cameos that we won’t spoil here, and the reveal of Beetz’ character is at least entertaining.

Imagine a crossbreed of Guy Ritchie’s repartee-filled early gangster films with the sort of action-heavy titles for which Leitch has become known and you’ve got the idea for this movie. Some of the comedy works, and a lot of the fight scenes are great, but ‘Bullet Train’ runs out of steam.

‘Bullet Train’ receives 3 out of 5 stars.

Unlucky assassin Ladybug is determined to do his job peacefully after one too many gigs gone off the rails. Fate, however, may have other plans, as Ladybug's latest... Read the Plot