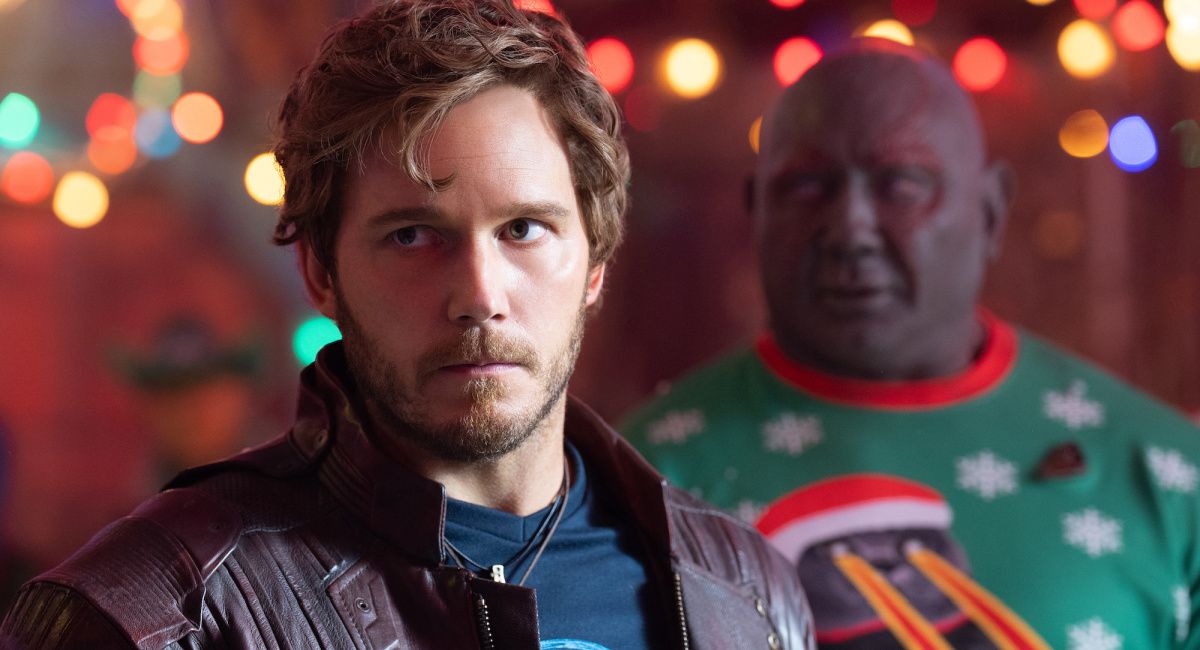 (L to R): Chris Pratt as Peter Quill/Star-Lord and Dave Bautista as Drax in Marvel Studios' 'The Guardians of the Galaxy: Holiday Special,' exclusively on Disney+. Photo by Jessica Miglio. © 2022 Marvel.

Premiering on Disney+ beginning November 25th and marking the conclusion of the MCU’s Phase Four is Marvel Studios’ second “Special Presentation” following ‘Werewolf by Night’ entitled ‘The Guardians of the Galaxy Holiday Special.’

Written and directed by James Gunn, the special bridges the gap between when we last saw the Guardians in ‘Thor: Love and Thunder’ and what they will be up to when we next see them in ‘Guardians of the Galaxy Vol. 3’

The special follows Drax the Destroyer (Dave Bautista) and Mantis (Pom Klementieff) as they set out to give Peter Quill (Chris Pratt) the best Christmas ever, after discovering that Yondu (Michael Rooker) ruined the holiday for him as a child. So, the two Guardians travel to Earth to kidnap Peter’s childhood hero, the ‘Footloose’ actor Kevin Bacon (playing himself), as the ultimate gift for Peter.

Kevin Bacon as himself in Marvel Studios' 'The Guardians of the Galaxy: Holiday Special,' exclusively on Disney+. Photo courtesy of Marvel Studios. © 2022 Marvel.

The result is a fun and heartwarming holiday special, and while the plot is somewhat predictable, it features great alternative Christmas music, a funny Kevin Bacon performance, and tees up ‘Guardians Vol. 3’ perfectly.

Pound for pound, ‘Guardians of the Galaxy’ is probably my favorite MCU movie, and the story was expanded well in ‘Guardians Vol. 2.’ But those two movies take place back to back, and with ‘Infinity War’ and ‘Endgame’ taking place before ‘Guardians Vol. 3,’ and the untimely firing and rehiring of Gunn by Disney, I’ve been concerned that the third ‘Guardians’ movie would not be what the filmmaker originally conceived for the trilogy. Remember, had Gunn not been fired, ‘Guardians Vol. 3,’ would have been released towards the beginning of Phase Four rather than the end.

Also, with the original Gamora (Zoe Saldana) dead, and a younger version of her running around the universe, this is not the Guardians team we began with and the ‘Holiday Special’ does a great job of setting up where our characters will be when ‘Vol. 3’ begins.

(L to R): Chris Pratt as Peter Quill/Star-Lord, Dave Bautista as Drax, and Director/Writer James Gunn behind the scenes of Marvel Studios' 'The Guardians of the Galaxy: Holiday Special.' Photo by Jessica Miglio. © 2022 Marvel.

The Guardians now comprise of Star-Lord, Drax, Mantis, Nebula (Karen Gillan), Kraglin (Sean Gunn), Rocket (Voice of Bradley Cooper), new member Cosmo the Spacedog (Voiced for the first time by Maria Bakalova) and Groot (Voiced by Vin Diesel), who is now in his late teens but almost fully grown. We soon discover that they have inherited Nowhere from the Collector (Benicio del Toro) and are helping the locals rebuild their community. Other Marvel secrets revealed include the identity of Mantis’ father, and that Gamora is still missing at the time of the special.

Since this is a Disney+ special, and not a theatrical movie, obviously it did not have the same budget as other ‘Guardians’ films, but for the most part it never compromises the project. However, there were two scenes that could have used more effects work.

The movie begins with a flashback to Peter’s first Christmas with Yondu, and crude animation is used instead of live-action. One can assume this is because Michael Rooker is not in ‘Guardians Vol. 3,’ and was not available on set when they shot the special. The animation is rough, which matches Peter’s foggy memory, but distracted from the rest of the production. If animation was the only way to go with this sequence, using similar animation to the Disney+ series ‘What If…?’ would have fit the project better.

(L to R): Pom Klementieff as Mantis and Dave Bautista as Drax in Marvel Studios' 'The Guardians of the Galaxy: Holiday Special,' exclusively on Disney+. Photo by Jessica Miglio. © 2022 MARVEL.

While Rocket and Groot are used sparingly, probably for budget reasons, Rocket looks good and is on par with his big screen appearances. Unfortunately, the same cannot be said for Groot, who at times looks more like the theme park character at Disneyland. In the special, Groot looks like someone in a rubber suit, rather than the CGI character we are used to.

But it’s the music, holiday themes, our beloved characters, and Gunn’s unique storytelling style that puts the “Special” in ‘The Guardians of the Galaxy Holiday Special.’ Gunn clearly understands the spirit of Christmas and knows what works in a project like this, with obvious influences from holiday specials of the past like 1964’s ‘Rudolph the Red-Nosed Reindeer,’ 1966’s ‘How the Grinch Stole Christmas!,’ and of course, 1978’s ‘Star Wars Holiday Special.’

The filmmaker also fills the special with non-traditional Christmas music like “Christmastime” by The Smashing Pumpkins or The Pogues’ classic song, “Fairytale of New York.” The underrated rock band the Old 97’s actually makes an appearance as an alien rock group on Nowhere learning about Christmas, and has a great performance at the end of the special with Kevin Bacon, who don’t forget is a musician himself.

The Old 97’s in Marvel Studios' 'The Guardians of the Galaxy Holiday Special,' exclusively on Disney+. Photo by Jessica Miglio. © 2022 Marvel.

Bacon is great playing a confused version of himself when Drax and Mantis abduct him, and he eventually befriends the whole group, becoming an honorary Guardian, which is fitting. The actor, who appeared in Gunn’s ‘Super,’ is a good sport spoofing his own persona and clearly understands what Gunn was aiming for. It’s also worth noting that Bacon’s real-life wife, actress Kyra Sedgwick makes a vocal cameo in the project.

As far as the core actors, Dave Bautista and Pom Klementieff have the largest roles, and have become a fantastic comedic team over the last few films. Drax and Mantis’ platonic friendship is one of the most engaging relationships in the franchise, and I’m intrigued to see where it goes in the next installment.

But the other Guardians have smaller roles. Chris Pratt’s Star-Lord does not have a lot to do but react to Mantis and Drax’s spontaneous Christmas, which he is emotionally touched by until he realizes that they kidnapped Kevin Bacon! Pratt’s basically just there to react, but has a touching scene with Mantis at the end, which I imagine will have large repercussions moving forward.

Sean Gunn as Kraglin in Marvel Studios' 'The Guardians of the Galaxy: Holiday Special,' exclusively on Disney+. Photo by Jessica Miglio. © 2022 Marvel.

While Sean Gunn’s Kraglin is involved in the retelling of Peter’s first Christmas with Yondu, he’s basically in the background with Karen Gillan’s Nebula, who could have had a larger role. I also would have liked to see more interaction between Rocket and Groot, two fan-favorites, but we’ll have to wait for the next movie as Rocket mostly shares his scenes with Cosmo the Spacedog, who was originally introduced in the first film. But it was nice to get a tease of ‘Borat Subsequent Moviefilm’s Maria Bakalova as the voice of Cosmo.

‘The Guardians of the Galaxy Holiday Special’ receives 4 out of 5 stars.

(L to R): Karen Gillan as Nebula and Pom Klementieff as Mantis in Marvel Studios' 'The Guardians of the Galaxy: Holiday Special,' exclusively on Disney+. Photo by Jessica Miglio. © 2022 Marvel.

The Guardians of the Galaxy Holiday Special

"The perfect present is a galaxy away."
75
PG-1345 minNov 25th, 2022
Watch The Guardians of the Galaxy Holiday Special Online