Simon Pegg returns as the voice of breakout character Buck Wild in this sequel that is closer in DNA to a Marvel movie than the ‘Ice Age’ franchise but should still please young fans of the series. 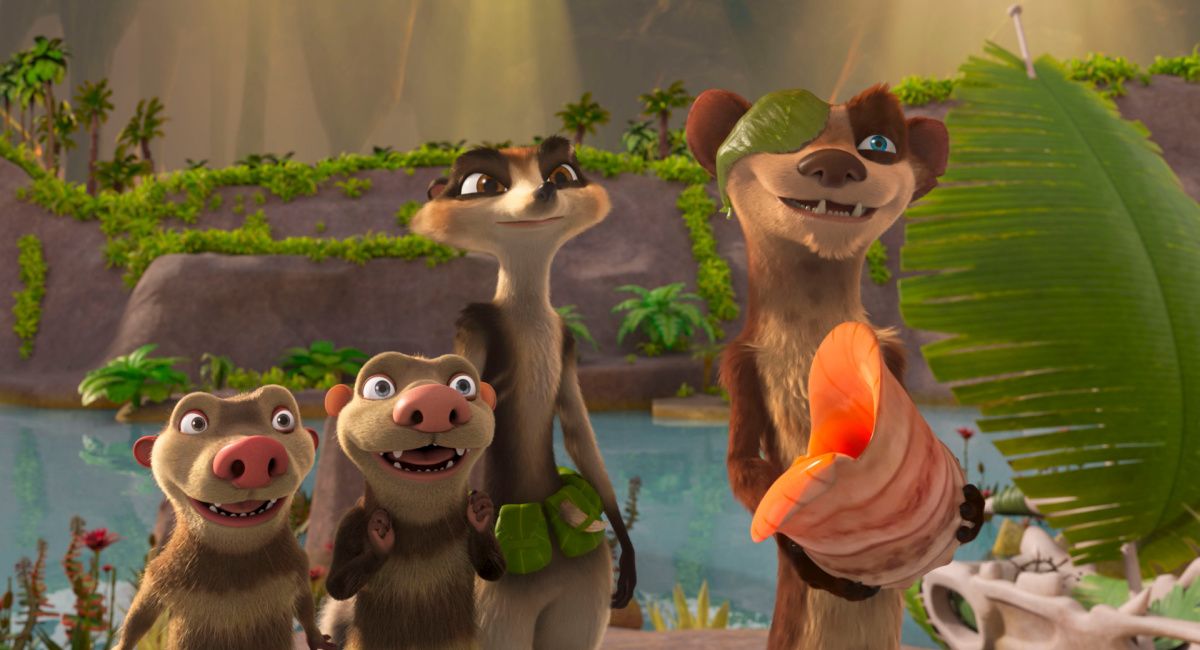 In addition to Pegg, the voice cast also includes Justina Machado (‘The Purge: Anarchy’), Utkarsh Ambudkar (‘Free Guy’), Vincent Tong (’Cop and a Half: New Recruit’), and Aaron Harris ('Returned'). The result is a kid friendly family film with fun characters and situations, that lacks the style and heart of the previous films in the series.

The movie begins by reintroducing us to Crash (Tong) and Eddie (Harris), as well as their sister Ellie (Dominique Jennings) and her husband, Manny (Sean Kenin). Frustrated with his brothers-in-law, Manny encourages them to move on with their lives and find their own adventures, which they reluctantly decide to do, and Ellie is furious when she discovers their gone. Crash and Eddy soon discover the Lost World and reunite with Buck Wild (Pegg), who seems to be happy living as a recluse.

But the Lost World is soon threatened by an evil dinosaur named Orson (Ambudkar), who has a vendetta against Buck. Orson is determined to destroy the Lost World and take back Earth for the dinosaurs, unless Buck, Crash and Eddie can stop him. Joining the team to defeat Orson is Buck’s old friend and love interest Zee (Machado), who is an even more capable survivor than Buck. Meanwhile, Ellie, Manny, and their friends go looking for Crash and Eddie to make sure they are safe.

‘The Ice Age Adventures of Buck Wild’ is a fairly entertaining animated movie with fun characters, and an interesting hook … it’s really a superhero movie! But, in capitalizing on the current most popular movie genre, the film loses some of the heart of its predecessors. In fact, the most touching part of the film only happens at the beginning and end and involves Ellie’s relationship with Crash and Eddie. The rest of the film is a hybrid between a Marvel movie and Indiana Jones, and may not be the “Ice Age” movie you expect.

Unfortunately, Ray Romano and Queen Latifah do not reprise their voice roles as Manny and Ellie, respectively. While the characters have less to do this time around, the absence of Romano is felt, as Sean Kenin does his best to imitate the comedian’s unmistakable voice. Dominique Jennings voices Ellie and gives the character the emotional depth the role calls for.

Also absent from the film are the voices of franchise actors John Leguizamo and Denis Leary, who play Sid and Diego, respectively. Jake Green and Skyler Stone do their best to fill in those roles. Crash and Eddie also have new voice actors, as Vincent Tong and Aaron Harris, take over the roles originated by Seann William Scott and Josh Peck. Tong and Harris do well in the roles, and channel the same heart and humor the beloved characters are known for.

Utkarsh Ambudkar gives a strong voice performance as the villain Orson, reminiscent of Jason Lee’s performance in ‘The Incredibles.’ Justina Machado voices new character Zee, and the actress really brings her to life, achieving more than just a “female Buck.” She is his rival, but also his friend, and that really shines through her performance.

But as the title indicates, this movie really belongs to Buck, and actor Simon Pegg’s performance in the role. Pegg plays the character with youthful energy, but also gives Buck a worldly wisdom that is apparent with every line he says. He’s kind of a cross between Indiana Jones and Jack Sparrow in the 'Pirates of the Caribbean’ movies. As the breakout character of ‘Ice Age: Dawn of the Dinosaurs,’ it only makes sense to center a film around Buck, and Pegg’s performance perfectly brings the character to life again.

The franchise has grossed over $6 billion at the box office and is the third highest grossing animated series of all-time, right behind ‘Despicable Me’ and ‘Shrek.’ The animated series, which began at 20th Century Fox, is now owned by Disney, which is a fitting home for the franchise, as the new movie will only be available on Disney+.

In the end, ‘The Ice Age Adventures of Buck Wild’ is certainly not the best film in the ‘Ice Age’ franchise, but it is entertaining fun for the kids. Taking the franchise into a more action-orientated direction was a good choice, but losing some of the series’ heart, and its original voice actors, does ultimately hurt the new movie.

‘The Ice Age Adventures of Buck Wild’ receives 2.5 out of 5 Stars.

69
Not Yet RatedJan 28th, 2022
Watch The Ice Age Adventures of Buck Wild Online