‘Turning Red’ is a Charming, Funny, and Thoughtful Coming of Age Story that is Another Winner from Pixar

Oscar-winning short filmmaker Domee Shi makes her feature directorial debut with a movie that is sweet, emotional, frantic, and honest about a difficult stage in life. 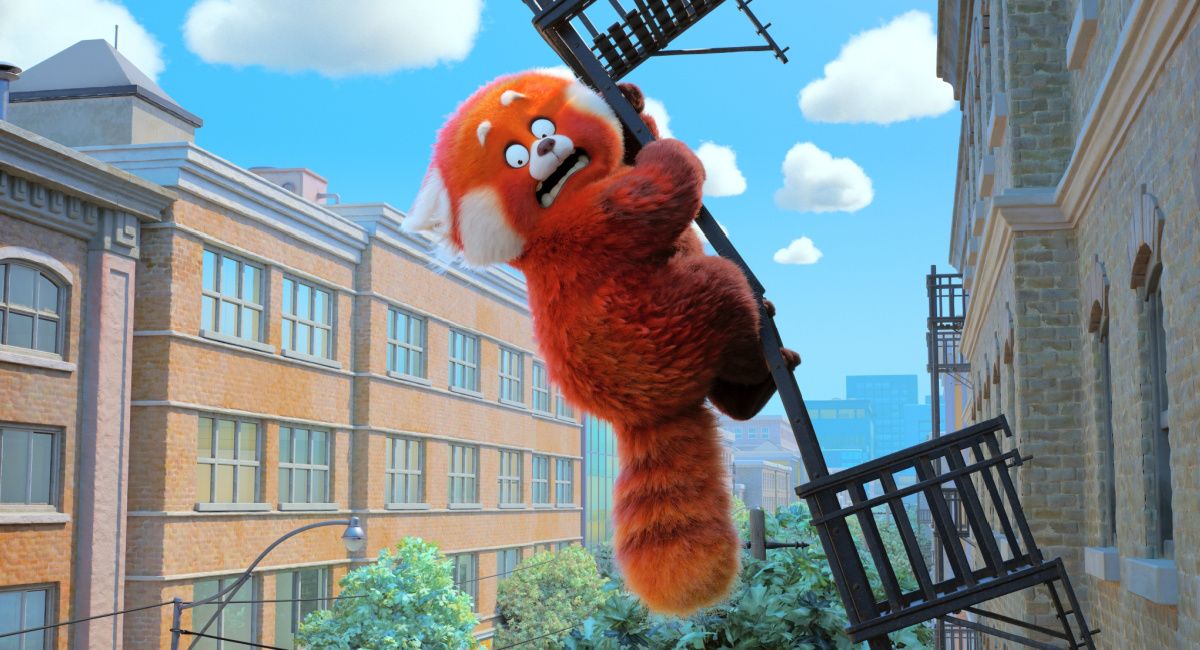 Films using fantastical transformations to tell stories about awkward life and biological changes are not a new phenomenon. Famous examples have included 1985’s ‘Teen Wolf’, in which Michael J. Fox always wanted to be special, but never expected to start sprouting hair in even more unusual places than usual puberty, while Brian De Palma’s classic Stephen King adaptation ‘Carrie’ had Sissy Spacek gaining some extraordinary powers to wreak revenge on school bullies. Even Pixar’s own ‘Luca’ last year had big body changes at its heart.

Yet with ‘Turning Red’, which is by turns hilarious and heartfelt, Pixar has fully embraced the idea of dealing with a subject that we all experience but has rarely been so thoughtfully explored on film. Teenage biological shifts are not the studio’s usual subject matter, yet here they are handled so well that it’ll likely spark useful (and maybe one or two awkward) conversations between parents and kids.

Our heroine is Chinese Canadian tween Meilin Lee (Rosalie Chiang), who is turning 13 and teetering on the edge of young adulthood. She’s still, however, content to throw herself into her studies (this is a proud nerd who relishes the chance to excel, and won’t apologize for it), spend time with her friends (an excitable group who, like Mei, are all starting to notice cute boys, and are obsessed with a particular cadre of them, boy band 4*Town, with the requisite floppy hair and ridiculous, styled personalities) and is doing her best to live up to her mother’s expectations.

Rosalie Chiang as the voice of Meilin in “Turning Red,” which will debut exclusively on Disney+ (where Disney+ is available) on March 11, 2022. © 2022 Disney/Pixar. All Rights Reserved.

So, when in a moment of heightened emotion, Mei suddenly turns into a giant red panda, she’s understandably flustered at first. Soon, she learns that it’s actually a family “blessing”, endowed thanks to an ancestor who requested the power to transform from the gods in order to protect her family in ancient China. Yet in modern-day – well, 2002 – Toronto, where there are fewer raiders likely to attack, it’s much more an inconvenience.

Still, how Mei embraces the idea of her panda side is one of the ways that ‘Turning Red’ feels refreshing. A lesser script would have had her endlessly try to hide (and hide from) the situation before begrudging acceptance, but she actually discovers that it can be a big plus and is a potential way for her and her buddies to see 4*Town in concert. Turns out, her classmates love the panda, and it’s soon a rich revenue source as kids queue to pay for selfies and tchotchkes.

Director Domee Shee and co-writer Julia Cho mine that idea for full comedy potential, but also don’t forget to build the right amount of real emotion into the story too. While the movie explores the cultural and parental pressures exerted on Asian children in particular, it finds a way to do it without (for the most part) relying on tropes.

(L to R) Rosalie Chiang as the voice of Mei Lee, and Sandra Oh as the voice of Ming in “Turning Red,” which will debut exclusively on Disney+ (where Disney+ is available) on March 11, 2022. © 2022 Disney/Pixar. All Rights Reserved.

Mei’s mother Ming (voiced by Sandra Oh) certainly has high expectations of her daughter, but she’s also a kind and understanding mom when the moment calls for it, worried about Mei and quick to act when she thinks her “red peony” is blooming. The movie also uses her to further examine the weight that tradition and custom place on people who haven’t been young for years yet fall back into familiar roles when their own elders show up.

While her father is more the quietly supportive type, he has his own role to play and, in keeping with Shee’s award winning short ‘Bao’, when he cooks, the scenes of food are so beautifully realized that you’ll find your stomach starting to rumble.

Mei’s friends are more than simply support for the lead. Though they’re naturally not as fully shaded, Miriam (Ava Morse), Priya (Maitreyi Ramakrishnan) and Abby (Hyein Park) all bring something to the story, whether it’s loyal friendship, a calm logic, or an insatiable appetite. Together, the foursome is a relatable, often hilarious group, navigating the tricky waters of young womanhood together

(L to R) Rosalie Chiang (voice of Mei), Ava Morse (voice of Miriam), Maitreyi Ramakrishnan (voice of Priya) and Hyein Park (voice of Abby ) in “Turning Red,” which will debut exclusively on Disney+ (where Disney+ is available) on March 11, 2022. © 2022 Disney/Pixar. All Rights Reserved.

This is Pixar finding something new to say, breaking away from its usual buddy comedy groove and benefitting from a new, diverse voice in its storytelling. While Mei’s experiences feel specific, nuanced and culturally relevant, they’re also universally relatable.

It’s not just the narrative that feels groundbreaking for the company. While the Emeryville studio has made a few experimental stabs at visual styles, ‘Turning Red’ draws from anime, kaiju films and other Asian influences to power a playful, kinetic energy all its own.

Though it is not as dynamic as, say ‘The Mitchells Vs the Machines’, it’s full of fun elements: crash zooms, characters’ eyes flashing to wide-eyed emojis at excited moments, sudden lighting shifts. And even in quieter, beautiful landscape shots of the Toronto skyline or with characters around the dining table, the colors are vibrant, impactful, and striking. Music-wise, Ludwig Göransson’s score soars when needed, while the 4*Town songs written by Billie Eilish and Finneas are hilariously daffy and boy band appropriate.

Rosalie Chiang as the voice of Mei Lee in “Turning Red,” which will debut exclusively on Disney+ (where Disney+ is available) on March 11, 2022. © 2022 Disney/Pixar. All Rights Reserved.

There are one or two familiar holes that ‘Turning Red’ still falls into – a late emotional turn feels like something from a lesser film and a ritual ceremony is straight out of Mystical Events 101.

But it’s so good to see that the company is embracing creative people outside of its admittedly impressive roster of veterans. ‘Turning Red’ is proof that Pixar hasn’t lost the magical touch, and that this team is still one of the best in the animation business.

‘Turning Red’ receives 4 out of 5 stars.