Star Wars Celebration Begins with the Cast of ‘Obi-Wan Kenobi,’ ‘Andor,’ ‘Willow’ and ‘The Mandalorian’ Season 3 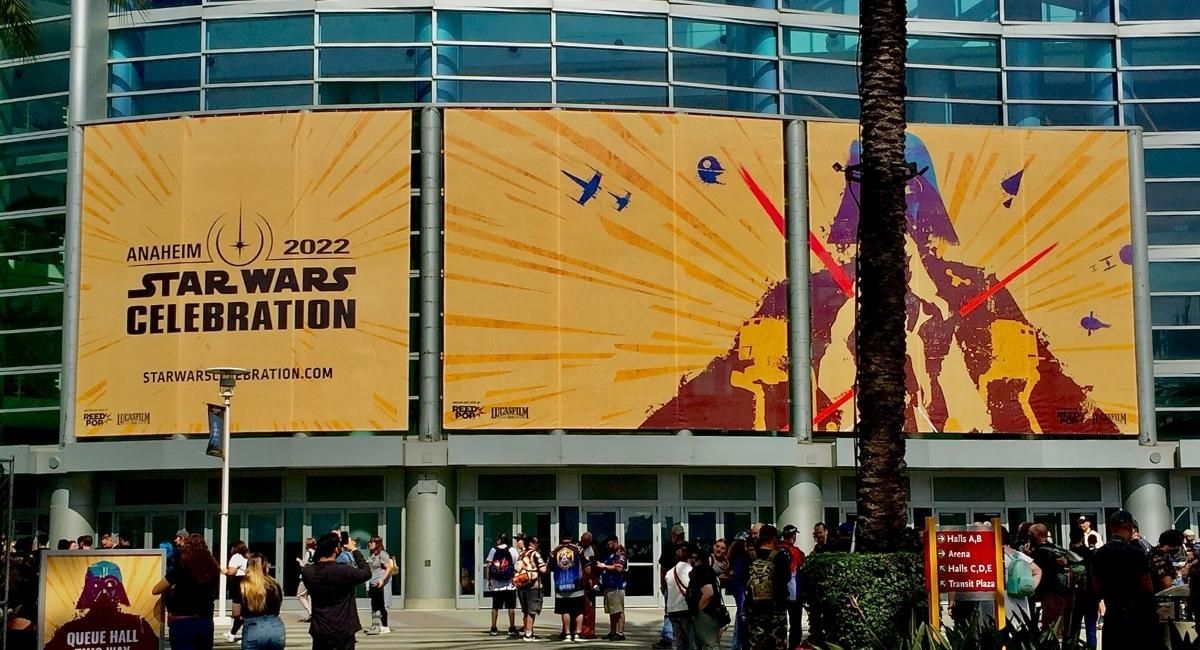 Star Wars Celebration got off with a bang on Thursday May 25th as thousands of fans gathered at the Anaheim Convention Center for the first day of the big event.

After the montage, a full choir dressed in black surrounded by smoke appeared to sing the Darth Vader theme (aka ‘The Imperial March’) live, while Ewan McGregor and Hayden Christensen took the stage together for the first time in decades to a standing ovation. “Hello everyone, we are back,” said Christensen. President of Lucasfilm Kathleen Kennedy, ‘Obi-Wan Kenobi’ director Deborah Chow, Moses Ingram and Rupert Friend took the stage to discuss the new Disney+ series which drops its first two episodes on May 27th.

After Kennedy addressed the crowd teasing what fans will experience over the next few days, McGregor talked about the new show and returning to the character. “It was really special to come back and play him with Deborah, and our brilliant cast,” he said. “In the last few years, we’ve really felt the love from you for the prequels we made. That has meant a lot to us, and me personally. It made the whole experience a lovely thing. It was fun to take the Obi-Wan that we all know and take him to a darker and more broken place. It was a great challenge in a way.”

Hayden Christensen also talked about returning to play Darth Vader. “Thank you so much, It’s been an amazing thing to return to ‘Star Wars’ and pick up a lightsaber again. It’s been incredible.” Rupert Friend, who plays one of the show’s villains discussed his character's lightsaber. “Mine is double ended, and it’s very hard not to make the noise all the time.”

McGregor then invited everyone in the hall to return this evening to watch the first two episodes of ‘Obi-Wan Kenobi’ with the cast at the Anaheim convention center, a few hours before it premieres around the rest of the world.

Kennedy introduced a teaser for ‘Andor,’ which will premiere on Disney+ this summer, then Diego Luna, who plays Cassian Andor from ‘Rogue One’ took to the stage along with other members of the cast. The series will be 12 episodes long and take place five years before ‘Rogue One.’ It will be a two season show, with the second season ending right before ‘Rogue One’ begins.

Luna discussed returning to his ‘Rogue One’ role. “It feels amazing. When I made the film, I lived everyday like it was the last. I did not know this was possible. I love what he represents. He is of the people, and this story is about the power we have and the awakening we deserve.”

Genevieve O'Reilly returns as Mon Mothma and the actress discussed reprising her role. “It is such a gift to come back to this role. I first played this woman almost 17 years ago, so to continue to play her now, I feel so lucky.” It was also announced that ‘Dune’ actor Stellan Skarsgård will be playing a Rebel leader in the series.

Luna then revealed the official teaser poster for ‘Andor,’ as well as a teaser trailer for the new show. The footage began with a village of people ringing a warning bell as the Empire attacks. We get our first look at Skarsgård’s new character, as well as Mon Mothma, and Cassian piloting a starship. The series will launch on August 31st with a two-episode premiere.

The presentation then transcended the ‘Star Wars’ world to give a sneak peek at another George Lucas-created property, ‘Willow.’ Original film director Ron Howard appeared to present the upcoming Disney+ series based on the 80’s film. “I’ve had a lot of great experiences throughout my career but nothing like making ‘Solo,’” Howard said. Then he welcomed on stage “Willow” himself, Warwick Davis. “I’m back playing the character and it is something I’ve always wanted to do. It’s a dream come true. Making the movie was one of the best experiences of my life, and I’ve been in ‘Star Wars’,” said Davis.

Joanne Whalley was also announced to return from the original movie for the new series and then appeared to address the crowd. "It’s incredible to be back and have her sword in my hand again,” said Whalley. The new series will take place 25 years after the original and feature all new characters in addition to the return of Davis and Whalley. It was also announced that Davis’ real-life daughter will play Willow’s daughter in the new series, while his son is his stunt double. The presentation ended with footage from the new show

Kennedy, who left the stage to put on a cowboy hat, then introduced ‘The Mandalorian’ team of Jon Favreau and Dave Filoni. Favreau began by complimenting Kennedy on being the “best producer in the business.” The two filmmakers are also working on the upcoming ‘Ahsoka’ series, as well as ‘The Mandalorian’ season three.

“I know I don’t get to do any of this without the support I get from fans and Lucasfilm. ‘Ahsoka’ is going great. We are lucky to have Rosario Dawson fronting this. She is not here because she is shooting scenes so you can see it soon.” Dawson in full costume appeared in a short video teasing the new series and saying, “Maybe I’ll see you next time.” ‘Ahsoka’ will premiere in 2023 according to Filoni.

Pivoting to season three of ‘The Mandalorian,’ Favreau announced that actress Katee Sackhoff will be returning as Bo Katana, and the actress was on hand to appear. Releasing in 2023, Favreau said that they have wrapped filming, and are now in the editing process. He then showed footage from the upcoming season.

Katee Sackhoff attends the studio showcase panel at Star Wars Celebration in Anaheim, California on May 26, 2022. (Photo by Jesse Grant/Getty Images for Disney).

Opening with 'The Mandalorian' theme, Mando is told he is no longer a Mandalorian because he removed his helmet. We get many shots of Grogu, as well as Bo Katan and the return of Carl Weathers as Greef Karga. Mando then says that he is returning to Mandalore to be punished for his transgressions.

Favreau then introduced director Jon Watts, who is working on a secret new ‘Star Wars’/Disney+ show. “So, this is a show we have been working on for a long time. It is about a group of kids that get accidentally lost in the Star Wars world and are now trying to get home. It’s a story about kids, but it’s not just a show for kids,” he explained. Watts then revealed that it takes place in the same ‘Star Wars’ timeline as ‘The Mandalorian’ and ‘Ahsoka.’ The series will be titled ‘Star Wars: Skeleton Crew’ and stars Jude Law. Watts said that they begin shooting soon, and that it will be released next year.

Finally, to celebrate the 90th birthday of ‘Star Wars’ composer John Williams, he took to the stage with a full orchestra to perform for the first time ever, the new theme to ‘Obi-Wan Kenobi.’

“Thank you all so much for being here. I know this is a ‘Star Wars’ convention, and this is not ‘Star Wars’, but you might know it,” said Williams before conducting the orchestra performing the “Indiana Jones Theme.” Then, Harrison Ford shocked the audience by walking on stage.

Harrison Ford of the upcoming fifth installment of the “Indiana Jones” franchise honors composer John Williams on his 90th birthday at Star Wars Celebration in Anaheim, California on May 26, 2022. (Photo by Jesse Grant/Getty Images for Disney).

”It’s a great honor to be here and congratulate John on his 90th birthday. That music follows me everywhere I go, and I am happy about it,” said Ford. “What I’ve come to appreciate is the generosity of this man, and what a wonderful talent we are blessed with,” the actor said of Williams, fighting back tears. “We are looking forward to the next ‘Indian Jones.’ We had a great time working with James Mangold and I am very proud of the movie we have made. So, I will be seeing you around campus.”

Finally, Ford announced that the 'Untitled Indiana Jones' will be released on June, 30th 2023, while Williams and the orchestra played “The Imperial March.”

You can watch our exclusive red carpet interviews with the casts of 'Obi-Wan Kenobi,' 'Andor,' and 'Willow' by clicking on the vide player above.