Ruben sat down with Moviefone to talk about being an actor’s director, working with snow effects, and throwing axes. 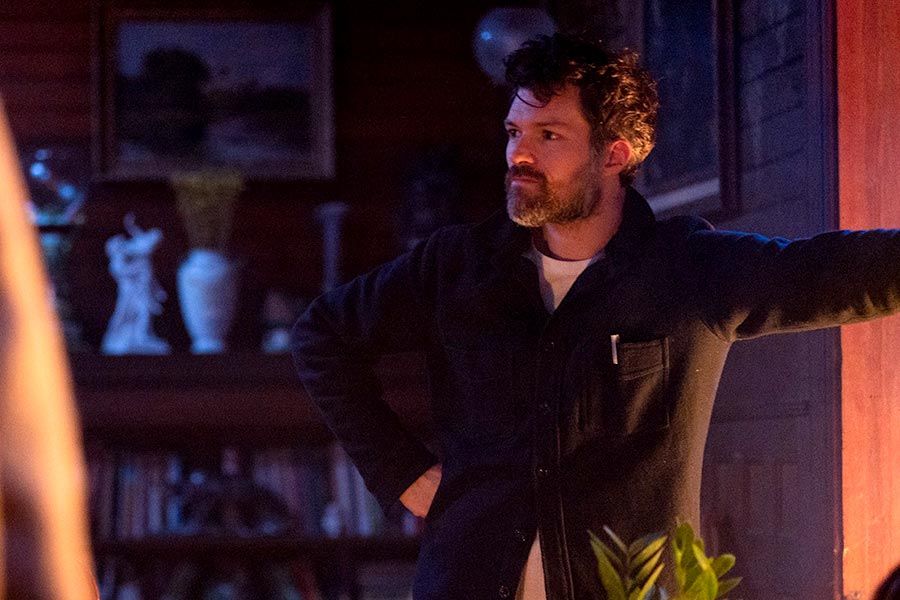 Director Josh Ruben on the set of 'Werewolves Within'

IFC Films' new horror comedy is set in the small town of Beaverfield, the new post for Forest Ranger Finn, played by Sam Richardson. When a snowstorm traps its residents, the newly arrived Forest Ranger finds he needs to gain the citizens' trust while he investigates the mystery of a strange beast that's taking lives. The movie is directed by Josh Ruben, and he sat down with Moviefone to talk about working with a full cast of comics and the difficulties of shooting a movie in the snow.

Moviefone: How did you get involved with this?

Josh Ruben: The script came to me via Ubisoft's producing partners, Vanishing Angle, Matt Miller and Natalie Metzger saw a rough cut of ‘Scare Me,’ my first film, gave some great notes and then thought, "Hell, he can direct an Agatha Christie contained thriller in the snow," and I pitched on it and the rest is history. Thank God.

MF: Had you been familiar with the game at all?

Ruben: Not at all. No. I played it once I landed the job at the Ubisoft offices with the creators of the game, and it was a lot of fun. They were gentle on me, which is good.

MF: You've got such a great cast here, a lot of kind of veteran comics. How did you go about casting the movie?

Ruben: It was a smattering process, I mean, I knew I wanted to work with Gayle Keller for years. She's a brilliant casting director, ‘What We Do In The Shadows,’ ‘Louie,’ and it goes on and on. And it was a combination of kind of letting her do her thing and me saying, "Hey, I want you to do your kind of, think outside the box sort of casting, concepts, ideas for these characters. Let's get wacky. Let's think wide and big." And then also asking actors like once Gayle did suggest, and we did cast Harvey Guillén, for example, we asked Harvey, "Who do you want to play your husband?" So actors had skin in the game like him and George Basil, and Harvey said, "https://www.moviefone.com/celebrity/cheyenne-jackson/365276/main/." And my mind exploded. I love Cheyenne. I wouldn't have thought of Cheyenne. They wanted to work together in the middle of Fleischmann's New York. They'll have a buddy, they'll have someone that they'll be able to latch on to worst case scenario at the end of the day. And then George suggested Sarah Burns. He said, "I want Sarah to play Gwen." And I thought, "My God, I wouldn't have thought of her. Yeah, my God, ‘Barry,’ she's a genius." And yeah, it worked out kind of wonderfully.

MF: When you've got those great comics all on the same set, is it challenging to kind of ride herd on everybody and keep everybody focused on the script? Or do you allow for some improv as you're shooting?

Ruben: You've got to allow for a little bit of improv when you have the likes of Sam Richardson and Harvey and George, just as an example, I mean, and Milana [Vayntrub], it goes on and on. They're all absolute geniuses. But yeah, so much of the work is done in prep. You've got to communicate with your actors and ask them how they want to be talked to and directed, A, and B, a little bit of rehearsal goes a long way to show them in these larger scenes here's why I want to block it this way. Here's why you won't be in the background of the scene, we want to implicate your character in that kind of Agatha Christie's sort of way.

And then to communicate with them, I took them on a walking tour, the entire cast, of this actual lodge, where we shot the Beaverfield Inn and showed them where sequences were going to happen. Here's where Pete's going to get terrorized. Here's where this is going to happen. Here's where Dr. Ellis is going to be sequestered. And that really, really helped my cast to start to dream and picture where they will be and kind of ease the butterflies of production and also show them that their director knows what they're doing. That they're taken care of, that, yes, you're coming to do a video game adaptation, but it's going to be 'Fargo' if it were an Amblin movie, I promise you, as much as I can get away with.

MF: I definitely hear an actor's director in you, a director that has also acted. Has anyone kind of done that same for you when you've acted on somebody else's project that they've kind of taken you in and showed you around the set, or is that just an entirely Josh thing? As in, “this is what I would want as an actor and so this is what I'm going to give to my actors.”

Ruben: I knew I wanted to give it to my actors for sure. I worked with Alex Karpovsky and Teddy Blanks on ‘Oh Jerome, No,’ an FX series, I got to play the same character in two back-to-back episodes, opposite Mamoudou Athie, which is incredible. And I don't actually remember much about the direction, I think, because it was just so easy. I think he just sort of let me do my thing. I didn't quite get a tour, but in its own way that just felt sort of wonderful because I was starting to oscillate between directing and acting quite a bit and knew the production designers as a director, but was working with them as an actor on a different show. And that was a really cool experience.

I'm sure it's happened. Alex did kind of put me at ease in his way, in the way that he does as a director's actor, an actor's director as well. But I knew from, and had learned also from ‘Scare Me’ through also talking with Jim Cummings and getting advice from him after ‘Thunder Road,’ before ‘Scare Me,’ and running into this, that communication was everything. I wouldn't have it any other way than just be as communicative as possible, you get the best product that way.

MF: What kind of complications does shooting in the snow add, especially to something like a horror movie that's got comedy in it?

Ruben: Waiting for the snow machine... turning the snow machine off if it's too loud... or instructing Jerry, who runs the snow machine, it's too much, it's too little, it's not enough, waiting on that sort of stuff. Waiting on wardrobe to sprinkle the stars and the wardrobe and get it right, and all that kind of stuff. And also the volatility of weather as it is, especially in this part of the Hudson Valley, where in February, you can have a mild winter, and we did. One day you're getting blizzard flurries, which we did catch on camera twice. And then you can have a lawn of melted snow that looks like spring. We got essentially an early spring, or days of it. So that's always tricky. But we are in this privileged position to be able to say, "We'll fix it in post." We will be able to work with brilliant post houses and special effects companies to hopefully seamlessly transition the weather and draw it through. And that was a big process, that was maybe the most strenuous part of the edit was the weather match.

MF: There’s a tension and release that happens in both comedies and horror movies. What's it's like trying to achieve that on the set? A lot of it, in the editing room, that's where you can control that for the audience. What are the tools, and what's the process on set of setting that up so that you can kind of make it happen in the edit bay?

Ruben: That's a great question. I mean, in terms of movement and movement editing, like an Edgar Wright-esque cut, you have to plan for it. You can't just sort of create it in the edit. I made the mistake of doing that with ‘Scare Me.’ There was this beer bottle opening thing I thought I was being smart and cool where I didn't think about if you're really going to do it the Edgar Wright way, you're really going to do it in that kind of fun, punchy Scorsese-esque sort of editing, positive way. But you've got to storyboard it. You whip it, and then you push, and you pull out, and then you whip, tilt down, tilt up, whatever, rather than just the object floating into the screen and the like. So I planned for the moments that I could recall the transition and for the edit. With your actors, you really just have to make it not an overcomplicated thing; give them simple direction and explain it very quickly, justify very quickly their actions to make the edit fun and watchable and the like.

MF: We finally get to see, I won't say who it is, but we get to see a werewolf in practical makeup. What was the design like? And how long was the process to put that person into that make up?

Ruben: Well, there was a stunt person, which was wonderful. So there were sort of stages of makeup with the beginning of the werewolf process with our actual actor and then there was the actual werewolf who was a stunt person. So the latter took probably three hours and change. And then the former, were in increments, intercut between the final scene of the reveal, Eric [the stunt performer] appears and the makeup team would make little adjustments to the actor's appearance as we would cut back to them, to sort of see there are subtle changes, if you're really looking, which are kind of fun to do.

It was wonderful working with Constantine Sekeris, who's a phenomenal creature designer who's worked on just about damn near everything. And my only mandate to Constantine was that I want to be able to see the actor's performance through the makeup. I don't want it to be buried in a suit or in animatronics or anything as much as I love the werewolf and late phases and bad moon. I want to be able to see emotion and performance through the character. And then that was it. And I got to see his rendered werewolf, it was pretty insane. I hadn't done that before.

MF: My final question, because I also asked this of Sam, did you get to learn to throw an ax? And if so, how good are you?

Ruben: I didn't throw an ax. I've thrown it on another show that'll never see the light of day. And I'm actually writing ax throwing into one of my next projects, so I guess it's just the thing that's going to thematically play, whether I like it or not. But I don't even love ax throwing. But I'd probably be terrible at it. I was a terrible athlete, terrible concentrator, terrible meditator, terrible tosser, but you know, with great practice....

MF: On that set, since the crew has to set up the axes to throw, how do you resist not just thinking "Let's see what happens..."

Ruben: Oh yeah. It was definitely hard. My AD Lenny Payan was like, "Please don't touch those." We definitely all wanted to touch them. They were largely rubber, they made them these brilliant sort of prop pieces that we could throw and not kill anybody.

‘Werewolves Within’ is now in theaters and streaming.