Female Filmmakers in Focus: ‘The Last Letter From Your Lover’ Director Augustine Frizzell On Her New Movie and Her Favorite Female Directors

This week, director Augustine Frizzell discusses her new film ‘The Last Letter From Your Lover,’ based on the novel by Jojo Moyes, and recommends a unique marathon of films directed by women.

The Last Letter From Your Lover - directed by Augustine Frizzell 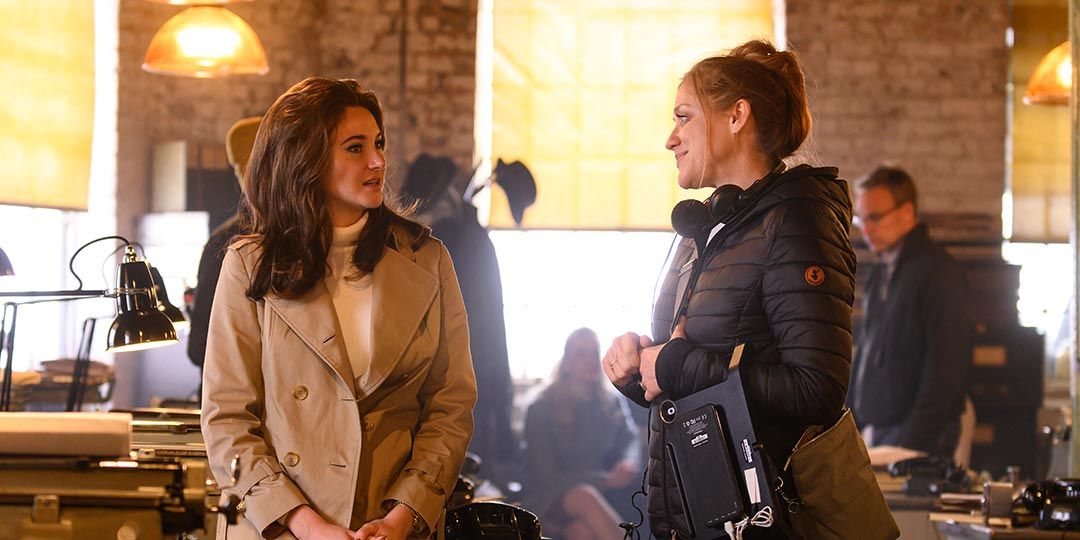 Augustine Frizzell grew up in Garland, Texas and made her directorial debut with the the hot and sticky ‘Never Goin' Back,’ which follows teenage high school dropouts turned waitresses Angela (Maia Mitchell) and Jessie (Camila Morrone) who just want to take a vacation to beach in Galveston. It had its world premiere at the 2018 Sundance Film Festival before being released that summer by A24. Frizzell directed the pilot for HBO's controversial teen drama ‘Euphoria’ starring Zendaya.

Based on the 2012 novel of the same name by Jojo Moyes, Augustine Frizzell’s sophomore feature ‘The Last Letter From Your Lover’ is a cozy romance that spans from the 1960s to present day, and trots the globe from London to the French Riviera. Shailene Woodley stars as Jennifer Stirling, an amnesiac 1960s socialite who after returning home to her stern husband Laurence (Joe Alwyn) begins to piece her life back together. In present-day London journalist Ellie Haworth (Felicity Jones) finds a love letter in an archive she discovers was written by Jennifer’s secret lover Anthony O’Hare (Callum Turner). What tore these star-crossed lovers apart? You’ll just have to watch to find out!

‘The Last Letter From Your Lover’ is now streaming on Netflix in the United States.

The Last Letter from Your Lover

"Don't leave your love story unwritten."
75
Not Yet Rated1 hr 50 minJul 23rd, 2021
Watch The Last Letter from Your Lover Online

Augustine Frizzell talked to Moviefone about her new movie.

Moviefone: How did you first get involved with this project? Were you familiar with Jojo Moyes book?

Augustine Frizzell: I had never even heard of Jojo, sadly. I was talking with my producer, Peter Czernin at Blueprint Pictures, and he was asking me what kind of project I wanted to do next. I told them I wanted to do something that was like comfort food. You know, cozy. I call this my hot cup of tea movie; it's warm and British. I wanted something that felt like a Sunday afternoon cozy watch. He said he had just the thing and sent me the script. I just cried my eyes out and called him back and said I have to do this. After that I found out who Jojo is and read the book, which I loved, and now I’ve dug deep into her catalogue of books and have become a huge fan.

MF: Once you’ve gotten into the story and know the emotional beat, how did you find your cast?

Frizzell: I had been such a huge fan of Felicity Jones since ‘Like Crazy.’ I just thought she was so incredible in that movie and really broke my heart. She’s so in touch with her emotions. So she was the first person we sent it to. When she read it she clicked with Ellie right away. We just sent it to her and said take a look and she said she just loved the Ellie character and was dying to play her. It was an interesting prospect because she hadn’t done anything so comedic in awhile. It was exciting to see her do something that was out of her norm. Then Shailene Woodley and I, we had actually met months earlier, way before I had even started work on this project, and just really hit it off. My producer says she was the first one that I brought up and then she was booked on something. We talked to a couple of other people and then found out her schedule had opened up. So we immediately asked if she wanted to do it. Shailene was all in. The thing about Shailene that was interesting is that she and I share such a fondness for romance, and just love in general. Love stories. We both love ‘Dirty Dancing.’ It’s one of our top favorite films. With the guys, I had seen Callum Turner in a movie ages ago as well. It was a tiny indie film and I thought he was so interesting and unique. He didn’t audition. We just met and he was so Anthony. He felt perfect for the role. Joe Alwyn and I met and he wasn’t really the age of the character in the book, but he is the nicest person in the world with this mischievous side and I thought it would be interesting to veer off what was expected with the age and go younger. He was down and he was perfect. Nabhaan Rizwan auditioned for my casting director Fiona Weir and he had the comedic timing and was charming and funny and I knew the minute I saw his tape he was perfect for Rory.

MF: In the scene where Ellie first goes into the archive, did Felicity Jones really eat that whole croissant in one go?

Frizzell: She ate more than one! She ate several. We set out to do it all in one take from the start. I didn’t want to cut. She was just eating them and she tells me now that she was thrilled at the opportunity to just eat a bunch of croissants because they're so good. After the first two she was like, "Maybe a spit bucket is a good idea."

MF: So you have four people playing two characters at different ages. What was your philosophy on having them meet while filming?

Frizzell: We had them meet. We all got together. They started their own conversations and started talking about diction and the cadence of their voices and hoping we could match that to some extent. They also talked about character, and the choices they would make when they were younger versus older. We definitely got together and read through it as a group. I thought it would help to bring out the energetics of the young, since those are the people we are with most of the movie, and help imprint that on to the older actors.

MF: I loved the structure of the film. Can you talk about the editing and how you kept the emotional throughline along with the mystery?

Frizzell: Hats off to my editor Melanie Oliver and everyone who gave feedback on the cuts, because it was not easy. I went into this movie thinking it’s all here in the script. I formulated transitions as we were filming, and I knew in my head this is probably going to shift a little when we get to the edit. But the amount that is shifted, I don’t think I could have planned for that. It really was a matter of just trial and error. Between my editor and I we watched this film over a hundred times, because you couldn’t just watch a section, you had to watch the whole thing start to finish to make sure it was evenly weighted throughout. You had to make sure that the beats were hitting at the right moments, that the music was carrying us from one minute to the next. It was really just trial and error, and watching and feeling, and trying to clear your mind with every viewing to make sure it was all working. It wasn’t easy at all.

MF: Why do you think people find epistolary romances so intriguing? What is it about love letters?

Frizzell: My husband [‘The Green Knight’ director David Lowery] and I fell in love over writing each other. It was partly online and it was partly via handwritten letters. By the mail we’d send these packages and letters to each other in our courtship phase. But there was something about the anticipation of getting the letter from him. There's a level of vulnerability that you can express when you’re writing that is so much deeper than you can have when you’re talking. I know that’s true for him. He’s not someone who easily shares his feelings in a conversation. But give him a pen and paper and he’ll pour his heart out and it’s so poetic. You have time to formulate what you’re saying, so when you’re reading you can feel that time and it feels very energetically connected to the person who did it. I don’t know why they go over so well on screen, but they are some of my favorite movies as well.

MF: When the movie is over, how do you hope audiences feel?

MF: Can you recommend another film directed by women for our readers to seek out?

Frizzell: I have to start with the first film that I ever
realized was directed by a woman that I didn’t know, and that is ‘Point Break’ by Kathryn Bigelow. I watched it obsessively when I was younger. I don’t know why I was just completely obsessed with that movie. I still like it, don’t get me wrong, but that’s the first movie that I ever looked up and was like “Oh wow. A woman made this.” which was pretty cool. Then one of my favorite filmmakers, she is kind of risque and older, her name is Lina Wertmüller. She did the original version of ‘Swept Away’. All of her films are so weird and offbeat and interesting. That movie is such an interesting dissection of class and male/female dynamics. It’s such an interesting film and I love her style. Chantal Akerman was a big moment in my life. When I saw ‘Jeanne Dielman, 23 quai du Commerce, 1080 Bruxelles’ it was just such a crazy exercise in anticipation and diverting expectations and dropping clues along the way.

MF: That would be a great triple feature: ‘Point Break,’ ‘Swept Away,’ and ‘Jeanne Dielman.’

Frizzell: If you want to throw in one more, you could throw in Claire Denis’ ‘Trouble Every Day.’

MF: Yes! Okay, we have to program this now. This is important. My favorite Lina Wertmüller film is ‘The Seduction of Mimi.’

Frizzell: Oh I love it!

MF: It’s such a weird movie. Weird is such a perfect way to describe her films. She’s such a unique, bizarre filmmaker.

Frizzell: Totally, and every time I watch her movies I’m struck by how she has such a way of creating great plots. They all have really good plots. You could just write them out and be like “man, that is such a good idea for a movie” and if you were to look at it in a traditional way, the movie based on that plot would be nothing like the movies that she makes out of them. So different and unexpected. I love that at the heart of all of them, they have a classic Hollywood plot. I just love her.

Kathryn Bigelow’s surfing crime flick ‘Point Break’ starring ​​Patrick Swayze and Keanu Reeves, though firmly an action movie, broke boundaries in its tender depiction of male friendship, and since its release in 1991 has gained a cult following. Nearly two decades later she became the first female director to win Best Picture and Best Director at the Academy Award for her 2009 film ‘The Hurt Locker.’

Chantal Akerman directed ‘Jeanne Dielman, 23 quai du Commerce, 1080 Bruxelles,’ which is considered to be one of the greatest films of all time, when she was just 24 years old. The New York Times called it "the first masterpiece of the feminine in the history of the cinema.”

75
Not Yet Rated1 hr 56 min
Watch Swept Away Online

One of the most influential Italian directors, Lina Wertmüller was the first woman nominated for Best Director at the Academy Awards for her 1975 film ‘Seven Beauties.’ Her most infamous film, ‘Swept Away’ tackles gender, class and politics with highly charged sexual satire.