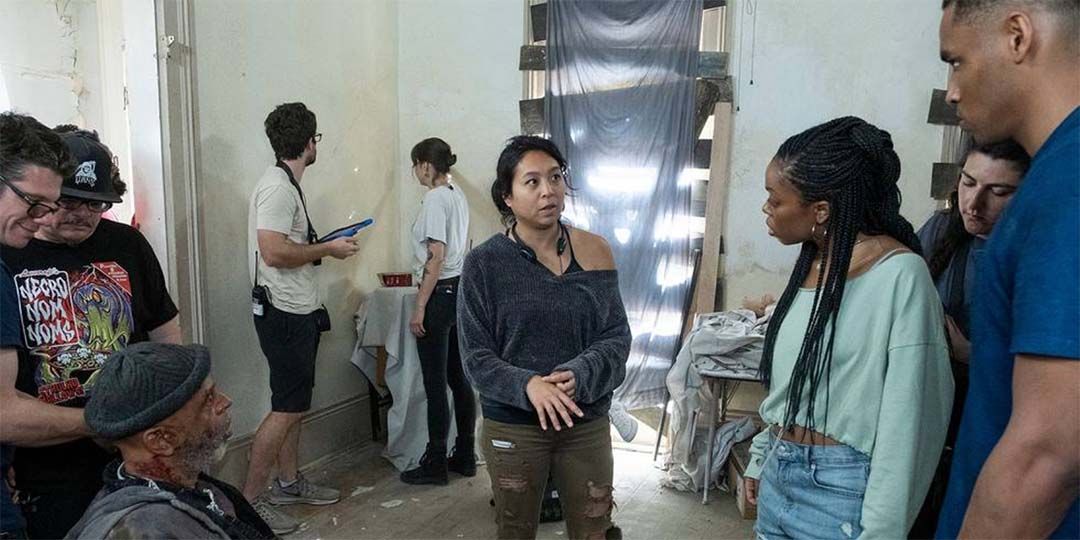 Filipino-American filmmaker Maritte Lee Go received her MFA in Film and Television from USC. She has either directed or produced dozens of film projects. She has been a Project Involve Directing Fellow, won the HBO Visionary Award in 2018 for her short film ‘Remittance’ and participated in Women In Media’s CAMERAderie Initiative. Earlier this year, she directed part of the anthology film ‘Phobias’.

Her latest film ‘Black As Night’ is part of the Prime Video anthology series ‘Welcome To The Blumhouse’. Each year, Blumhouse partners with Prime Video on a four film horror-thriller anthology with a shared thematic vision. This year’s theme is “institutional horrors and personal phobias.” Directing a script written by Sherman Payne, Go’s film ‘Black As Night’ follows Shawna (Asjha Cooper) as she navigates both the horror of being a teenage girl while also defending her neighborhood from a horde of bloodthirsty vampiresv.

‘Black As Night’ is streaming now as part of this year’s ‘Welcome To The Blumhouse’ anthology on Prime Video.

Movifone: How did you get involved with ‘Welcome To The Blumhouse’ anthology?

Maritte Lee Go: Well, it's always been my dream to make a Blumhouse movie. I watch every single one of the films that come out and just always dreamt of making my own movie. I was actually pitching a movie with Amazon, I was pitching another horror film that I had been developing. And although that one's not yet been picked up, they were looking for directors for this slate of films and sent me the script I absolutely loved. It felt like it was something groundbreaking that I've never seen before. And I knew I had to be a part of it. So I pitched it and luckily I got it.

MF: And was it always sort of set in New Orleans?

Go: No, actually, Sherman Kane, the writer, he wrote this over 10 years ago, it was one of his first scripts he had ever written out of film school. It took place in New York. The script had been bounced around to like every studio in town. Although they loved the writing, it just wasn't the perfect time for it to come out. So much has been happening in our country that this subject matter was on the top of everybody's brain. So they picked it up. This slate of films was being shot in New Orleans, so he reformatted it that location. Honestly I think it made the movie even better because there's so much history embedded in New Orleans. To be able to pivot and add that extra layer of New Orleans really strengthened it.

MF: Can you talk a little bit about the location scouting in New Orleans?

Go: When I put together the pitch and was thinking about the locations I wanted, I Googled what I thought was a New Orleans mansion, and that image I used in the pitch packet became the real location in the film. That was a cool manifestation. But there's so much amazing history in New Orleans. Everywhere you look, the trees are weeping. They're so beautiful. The architecture of every building. Many of them are centuries old. When you're able to use the real locations that are written within the script, and not build it on a stage or a set, it adds so much authenticity.

MF: Were there any challenges in making this with COVID restrictions?

Go: We shot half the movie before COVID and then shot the other half after four months into the pandemic. There were already so many challenges to begin with. It’s not a huge budget film, and we've got stunts and effects and VFX. We really, really pushed it to its limit, and then you add a pandemic in there, and it becomes nearly impossible. The second half of the movie we were on such time crunches, we only shot this movie in 17 or 18 days. It was a really short turnaround, but by the time COVID was here, we could only do I think a maximum of 10-hour days, and then only with a quarter of our crew. We also shot through lightning storms. With the COVID protocols, you're wearing face masks, and you can't even be close to each other. There were scenes where they had to kiss or bite, and we had to do countdowns, like 3... 2... 1... now don't breathe! Angle your head! And then pretend. There were so many challenges, but all in all, I think we got everything we needed.

MF: How did you find Asjha Cooper for the lead character of Shawna?

Go: When I saw her perform, I couldn't tell the difference between her as Asjha and as Shawna. She just is her. I couldn't see the difference. When an actor embodies a character, and I can't tell the difference, I know that's them. She's such a talented actress. She doesn't have formal acting training in it, but she has so much talent and skill inside of her. She can go from comedy to crying to screaming within moments. She's an amazing actress and I just know that she's gonna explode and do so many bigger and bigger projects.

MF: How did Keith David join the cast?

Go: For his role, we needed somebody who has a name. So I created a list, and he was number one on it. One of the first movies I remember seeing him in was ‘Requiem for a Dream’. His voice terrified me. He just has this presence. He's so powerful. What I see on screen and what he has been able to accomplish is so iconic, that only an actor like him would be able to play this character and give it so much life. I've just been a huge fan of his forever, so to be able to work with him was incredible.

MF: What do you think this film adds to the tradition of films about vampires?

Go: Vampires are a staple of horror. Sherman Payne, the writer, did such a great job in creating something new out of something that we all have seen done a million times. To be able to tell a story with a deeper conversation around all the issues that are happening within this country, through the vampire lenses I feel is so exciting and new. I hope audiences will watch and feel like there's something familiar, but something was so fresh about it.

MF: Were there any visual references for the look of the film?

Go: Specifically, I had been looking at ‘30 Days of Night’ and ‘Interview with the Vampire’. Those are my favorite vampire movies, so I looked at the way they structured tension and their use of shadows and light. This helped me figure out how to make sure the audience is also experiencing these vampires when their victims are experiencing it. I also looked at ‘Kill Bill’ for the animation sequences. Our villain has a very complicated past that got him to where he is now, so I wanted the audience to experience the pain and the anguish that got him to this place of rage and anger. I wanted them to really feel for him so that you could almost understand why a person could go this dark.

MF: Could you talk a bit about collaborating with cinematographer Cybel Martin?

Go: Cybel is amazing. She is also obsessed with gore. We were always talking about what we were watching, and what's the next new scary thing. She was very much in line with what I wanted. It was really fun to create the shotlist and storyboards with her. She's really great at communicating with her crew how to accomplish her vision while also translating my vision. Now she's shooting ‘American Horror Story’, which is so exciting. Her career continues to grow, which makes me super happy because she's very deserving of it.

MF: How do you hope people feel after the film is over?

Go: I want people to have a great time. It’s a roller coaster of emotions. You will hopefully understand and empathize with the character of Shawna, and feel what it feels like to be a young woman of color, who is experiencing all of these things. The beauty of filmmaking is that you can empathize through these characters that you would never otherwise experience their life. I want people to walk away with the experience of what it would be like for somebody who comes from an oppressed community, but also feel the excitement of slaying vampires. I want people to have a really good time, but also think deeper about the issues that are happening in this country.

MF: You went through Women In Media’s CAMERAderie Initiative. What was that process like?

Go: Oh, it was amazing. I had written the script I submitted to the contest - ‘Illipino’ - about two weeks before. I loved the script that I had written, but I wasn’t sure if anyone ever wanted to see this movie. It was very close to me, based on my own experiences growing up. When they chose me as one of the finalists, it validated my voice and my life experience in this world. They really supported my vision. They're trying to change the industry in a very positive way and get women's voices out there. They've really uplifted me as a director. Being able to make that short film has actually helped me get my next movie, which is a musical. So I owe them so much gratitude. I love seeing organizations that truly understand that there is this glaring issue of inequality in the industry, and are really pushing for more women directors. I’m thankful for them.

MF: Is there a film directed by a woman that you think people should seek out?

Go: I love Kathryn Bigelow’s ‘Strange Days’. It feels so advanced for its time. It's such an epic film. She did it so beautifully. It's scary, and it deals with the same kind of social issues that we deal with today. It’s about escaping your own personality to live another person's life. I think she's incredibly talented and so smart. She's really been this kind of shining beacon of what women can do and how they can push the limits of this industry. I strive to be a director as talented as she is.

From a screenplay by James Cameron and Jay Cocks, Kathryn Bigelow’s now iconic sci-fi-thriller ‘Strange Days’ was a box office bomb. Hot off the financial and critical success of the surfer-set actioner ‘Point Break’, this genre-defying science fiction noir received praise from critics like Roger Ebert, who gave it a coveted 4-star review, but only made $8m off of its $42m budget. Set on the last two days of 1999, the movie features Ralph Fiennes as a black marketeer who sells recordings that allows people to experience the memories and physical sensations of others. One of those recordings shows a sex worker he knows being murdered, leading him try and discover the indentity of the killer. Despite its lackluster reception at the box office, the film garnered the Best Actress award for Angela Bassett at the 22nd Saturn Awards, and Bigelow became the first woman to win the ceremony’s Best Director award. Of course, Bigelow would break that glass ceiling again when she became the first woman to win the Best Director award at the Oscars for her 2009 war film ‘The Hurt Locker,’ which also became the first film directed by a woman to win Best Picture.

Set in the year 1999 during the last days of the old millennium, the movie tells the story of Lenny Nero, an ex-cop who now deals with data-discs containing recorded... Read the Plot