‘The Northman’ is Brilliant, Beautiful and Bloody Filmmaking at its Best! 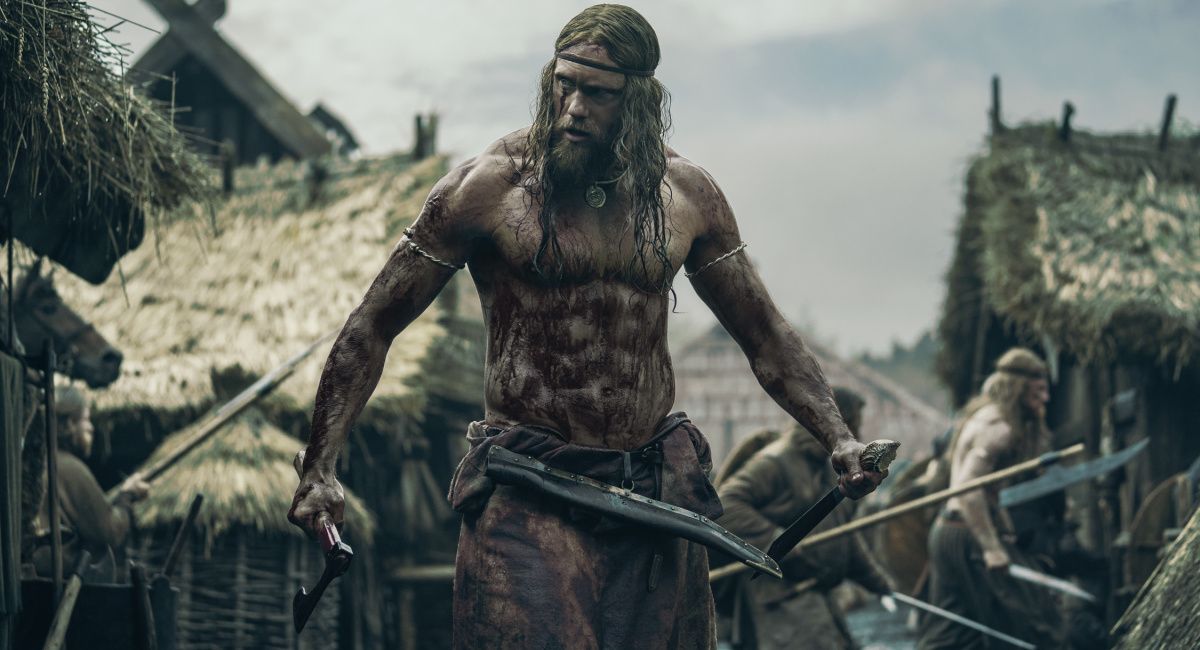 Opening in theaters on April 22nd is the new historical drama ‘The Northman,’ from ‘The Lighthouse’ director Robert Eggers. The movie stars Alexander Skarsgård as Amleth, a Viking prince on a quest to avenge his father’s (Ethan Hawke) murder.

In addition to Skarsgård and Hawke, the film also features Anya Taylor-Joy (‘Last Night in Soho’), Claes Bang (‘The Girl in the Spider’s Web’), Björk (‘Dancer in the Dark’), Willem Dafoe (‘Spider-Man: No Way Home’), and Oscar-winner Nicole Kidman (‘Aquaman’).

The result is an epic and ultra-realistic Viking movie that pulls influence from ‘Braveheart,’ ‘Spartacus,’ 'Conan the Barbarian,' and even William Shakespeare’s ‘Hamlet,’ and features a career-defining performance from Alexander Skarsgård.

The movie begins in 895 A.D. on the imaginary island of Hrafnsey where King Aurvandill (Hawke) is brutally murdered by his brother Fjölnir (Bang), while his son, a young Prince Amleth (Oscar Novak) watches in horror. Amleth barely escapes and is eventually discovered and raised by a band of Vikings, but vows to one day avenge his father’s murder and rescue his mother, Queen Gudrún (Kidman).

Years later, an adult Amleth (Skarsgård) is told by a Seeress (Björk) that he will soon have his revenge on his uncle. He then learns that Fjölnir was overthrown from his kingdom, and now lives in exile in Iceland. Amleth disguises himself as a slave on a ship being taken to Fjölnir and soon meets Olga (Taylor-Joy), a sorceress who wants to help Amleth on his quest.

Once arriving in Iceland, Amleth learns that his mother has married Fjölnir and had their own son, Gunnar (Elliot Rose). Now, in order to avenge his father’s death, Amleth will have to search for the magic sword Draugr, if he wants to defeat Fjölnir and save his mother, Olga and the other slaves.

Coming off of his acclaimed films ‘The Witch’ and ‘The Lighthouse,’ ‘The Northman’ solidifies director Robert Egger’s place as one of the most exciting and gifted filmmakers working today. The movie is large and epic in scope, but Eggers keeps it moving at a furious rate. The movie is dark, both physically and emotionally, extremely realistic and very bloody.

Eggers choice to shoot on location, and use practical effects when possible, adds to the realism and attitude of the piece. The film also has a magical aspect that is relayed quite well and seems very realistic, given the source material and its role in the overall story.

The supporting cast is strong, with quick but fun performance from Willem Dafoe and musician Björk. Ethan Hawke is excellent as King Aurvandill, even if his role is somewhat limited as well. Hawke really sets the tone and pace for the movie, and his performance is what puts Amleth’s journey in motion.

Danish actor Claes Bang gives a standout performance as the movie’s villain, Fjölnir. It’s a captivating and multi-layered role that the actor plays well, creating an antagonist worthy of the film’s hero.

Oscar winner Nicole Kidman is also at her best in this movie as Queen Gudrún. In contrast to her role as the hero’s mom in ‘Aquaman,’ playing Amleth’s mother is a much meatier role and is reflective of an actress of her caliber. With several twists and turns, Kidman is always regal in the part, and her performance really packs a punch when her character’s true intentions are eventually revealed.

Anya Taylor-Joy, who starred in Eggers first movie ‘The Witch,’ gives a mysterious yet vulnerable performance as Olga, despite her limited screen time, and has great chemistry with Skarsgård. Make no mistake, ‘The Northman’ is Amleth’s story, but the screenplay serves Olga well, making her an important key to Amleth’s success and his bloodline’s future. At times, her performance is overshadowed by the action of the story, but her character’s importance to Amleth and the plot is never forgotten.

But like any good movie, ‘The Northman’ truly works as a whole only because of Alexander Skarsgård’s incredible, captivating, and thoroughly entertaining performance. I truly believe that this is the movie that will finally make the actor a household name, after roles in disappointing projects like ‘Battleship,’ ‘The Legend of Tarzan’ (which is actually a really good movie), and ‘Godzilla vs. Kong.’

As Amleth, Skarsgård is shockingly strong, both physically and in his performance, and commands the screen with urgency and excitement. He makes the movie work on every level and gives the best performance of his career.

In the end, fans of ‘Game of Thrones,’ ‘The Lord of the Rings’ and other "sword and horse" projects will be happy with ‘The Northman,’ and even surprised at the dramatic levels the film reaches. Director Robert Eggers has established himself with this movie as one of the most exciting filmmakers working today, and Alexander Skarsgård’s performance is not only a personal best for the actor, but the best male performance of the year so far!

‘The Northman’ receives 5 out of 5 stars.