There were also first looks at Damien Chazelle’s ‘Babylon’ and the new ‘Dungeons & Dragons’ movie. 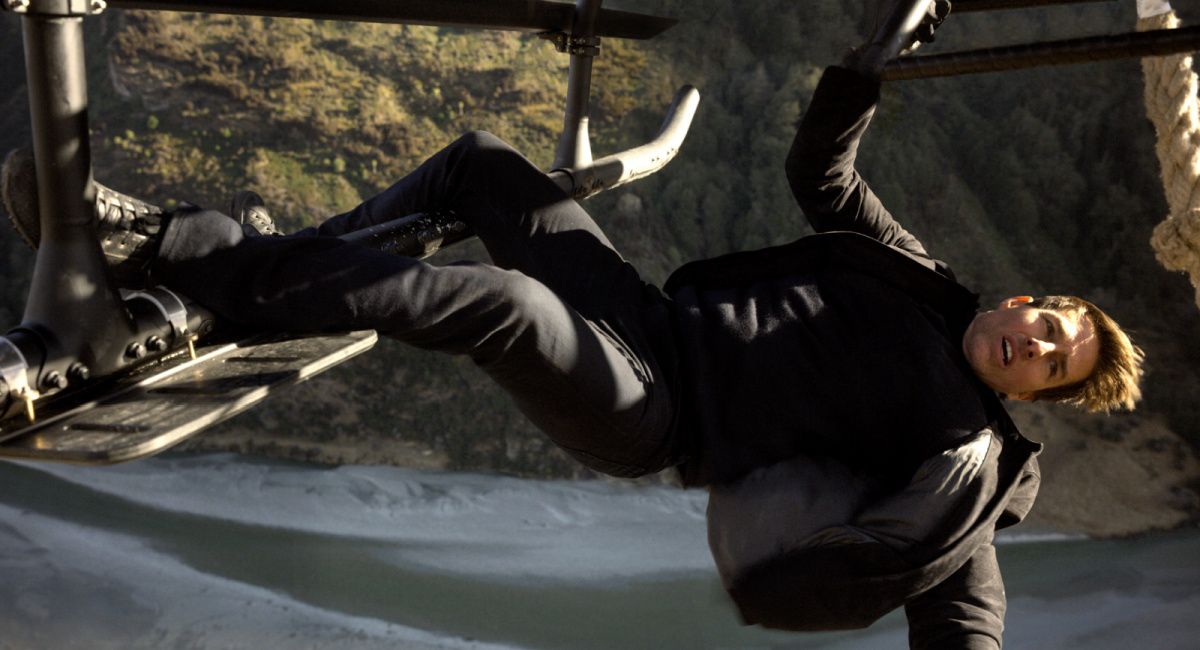 It might boast one of the biggest movie stars left in the world – also known as Mr. Thomas Cruise Mapother IV in its stable -but Paramount’s CinemaCon presentation didn’t quite match the scale of some of the other studios preceding it on the schedule.

Still, Paramount did have some news to share, with Cruise sending a video from (because of course) a plane above South Africa where he’s busy filming the eighth ‘Mission: Impossible’ movie. Which is fitting, because the big announcement from Paramount is that the seventh ‘Mission’ movie is called ‘Mission: Impossible – Dead Reckoning Part One’.

That, of course, leads us to assume that it’ll be followed by ‘Mission: Impossible – Dead Reckoning Part Two’, but given the fluid nature of all details while Cruise and writer/director Christopher McQuarrie are shooting the movies, that may end up changing.

We do know that the two movies are supposed to be connected, and the title gives ominous feelings as to what could be happening to heroic agent Ethan Hunt (Cruise). Still, this is a man who has cheated death many times over, so don’t count him out just yet.

“Let’s all try to have a great summer. See you at the movies!” Cruise exclaimed before his plane plummeted into a canyon (it was all part of a bit, he’s fine as usual). He introduced the first look at a teaser for ‘Dead Reckoning Part One’ and the entirety of his latest movie, ‘Top Gun: Maverick’. While no direct mention was made, there’s a good chance the ‘Mission’ trailer will be attached to ‘Maverick’ when the long-awaited ‘Top Gun’ sequel touches down on May 27th.

‘Mission: Impossible – Dead Reckoning Part One’ arrives in theaters on July 14th next year, followed by the eighth film on June 28th, 2024.

(L to R) Knuckles (Idris Elba) and Sonic (Ben Schwartz) in 'Sonic The Hedgehog 2' from Paramount Pictures and Sega.

Paramount has been having a good year in terms of box office so far – with movies including ‘Sonic The Hedgehog 2’ ‘Jackass Forever’ and ‘Scream’ topping the charts upon release and making money.

“When I started this job six months ago, I was asked what do I think the business will be in a post-pandemic world?” studio chief Brian Robbins told the crowd. “What I responded was pretty much exactly what Paramount looked like so far this year. All four of our releases this year have opened to No. 1 at the box office and with ‘Top Gun’ we think we have a really good shot at making it five for five. None of this would have been possible if we had not doubled down in our faith in our release dates.”

In lieu of bringing up separate filmmakers and actors to introduce its upcoming batch of releases (probably because screening ‘Top Gun: Maverick’ ate up much of the time), the studio showed a sizzle reel.

‘Dungeons & Dragons: Honor Among Thieves’ will open in theaters on March 3rd, 2023.

Also shown? Footage from ‘La La Land’ director Damien Chazelle’s new jazz-era old-Hollywood drama. Margot Robbie stars as an anxious actress, demanding her close-up, intoning, “You don’t become a star, you either are one or you ain’t.”

And the new ‘Mission’ wasn’t the only title announced by Paramount: we now know that the ‘A Quiet Place’ spin-off, to be directed by ‘Pig’s Michael Sarnoski, will be called ‘A Quiet Place: Day One’, and, as the name suggests, is a prequel.

It’ll explore a family other than the usual Abbots of the first two main ‘Quiet Place’ movies trying to survive on the day the aliens first arrive – which was briefly show in the dramatic opening to ‘A Quiet Place Part II’.

‘A Quiet Place: Day One’ will be in theaters on September 23rd next year. ‘Quiet Place’ overseer John Krasinski is also developing a third main movie, though no details were offered.

(L-R) Noah Jupe and director John Krasinski and on the set of Paramount Pictures' "A Quiet Place Part II."