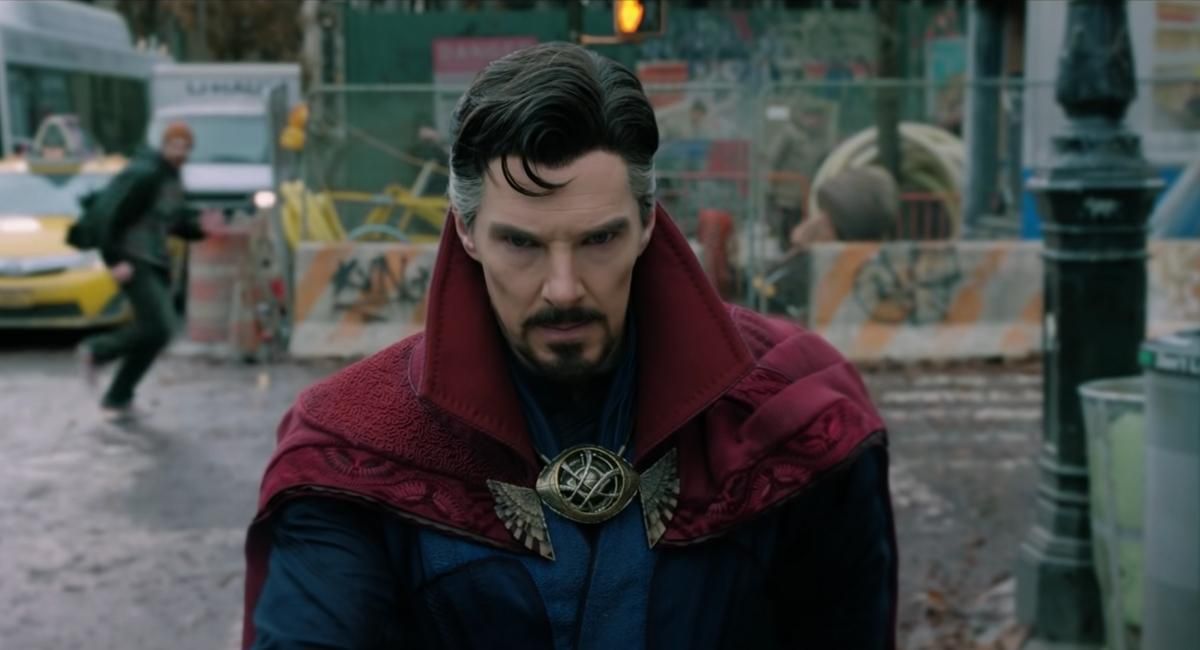 Benedict Cumberbatch in 'Doctor Strange in the Multiverse of Madness' from Marvel Studios.

Opening in theaters on May 6th is the latest MCU movie and sequel to 2016’s ‘Doctor Strange’ entitled, ‘Doctor Strange in the Multiverse of Madness.’

Directed by Sam Raimi (‘Evil Dead II,’ ‘Spider-Man’) the new film once again stars Benedict Cumberbatch (‘The Power of the Dog’) as the title character and follows the events of ‘Spider-Man: No Way Home’ and the Disney+ series ‘WandaVision’ as Strange must stop Scarlet Witch (Elizabeth Olsen) from destroying the multiverse.

Moviefone recently had the pleasure of speaking with Benedict Cumberbatch about his work on ‘Doctor Strange in the Multiverse of Madness.’

You can read our full interview with Benedict Cumberbatch below or watch the interview by clicking on the video player above.

Moviefone: To begin with, what do you want to tell fans that are planning to see ‘Doctor Strange in the Multiverse of Madness?’

Benedict Cumberbatch: Welcome back. Thank you for coming in your droves to see ‘Spider-Man: No Way Home’ and thank you for being here again. It's just great to have you back. It's great to have people in a seat about to see a film that I'm super proud of, and that's got a lot of treats, thrills and surprises for you. It has some great nostalgia, and I think very interesting development of a character I love playing for you guys. I love being your Doctor Strange and I hope you love watching the film as much as we loved making it.

MF: Director Sam Raimi introduces horror elements to the MCU with this movie. Just how scary will this film be?

BC: It's not ‘The Exorcism of Emily Rose.’ But there are some jump scares. There's some great cinematographer John Mathieson/Sam Raimi camera work, but it's got to be palatable for a family. So, it's kind of scary and it's quite dark at times, but I wouldn't say it's a horror film, that's for sure.

MF: When you saw the final film for the first time, did it scare you?

BC: First time, probably. I am very involved. I think I have a very different lens on when I'm watching my own work and it's to give feedback for editorial notes, ADR and all the kind of post-production stuff, reshoots and everything that we kept doing to try and perfect it. I'm really looking forward to having the audience experience it in Los Angeles at the premiere, and I'll be in that audience watching the movie. I had such a fun time doing that with ‘Spider-Man,’ and I know it's going to be a similar ride with this, hopefully.

That film filled so many extraordinary kinds of desires. I mean, to be in an audience and experience the humor of it and hear the laughter, hear the cheer moments, but also to hear the pin drop silence of the emotional moments landing, it was such a thrill to be viscerally amongst a community of people experiencing that. It really amplified the joy I had individually watching it. So, I'm hoping that moment will come. if there are jump scares that work with a big audience, I'll know it when I watch it at the premiere.

MF: Director Sam Raimi has also said publicly that this movie will “drastically change who Doctor Strange is.” Can you talk about that?

BC: I like to think so. I mean, there's an awful lot going on in this film. I hope that isn't lost on people. There is some character development, which I think is pretty crucial to him. I think we've seen him in his first introduction to the Marvel cinematic universe, as he was an arrogant neurosurgeon and a man trapped in a gilded cage of his own making. His ego was driving what he was doing, it was not out of a duty of caring. Then to have a duty of caring, the idea of doing things for others, being selfless and sacrificing, that came with his transition into a superhero.

I think since the last few films he's been pretty omnipotent and unquestionable, and then a human relationship with Peter Parker has destabilized all that and creates the need for him to help someone he both admired as a fellow soldier on the battlefield, so to speak, but also as a human being who'd lost his mentor and someone he cared about by the end of the film.

It opened up the problem that he still faces in his own character, which is this level of arrogance believing that his way is the only way and only he can actually solve the problem. I think what he learns in this is it's better to act together than to act alone. That's the big shift I'd say, without pointing too much in the direction of how that happens.

Benedict Cumberbatch in 'Doctor Strange in the Multiverse of Madness' from Marvel Studios.

MF: Finally, would you say that in real life you are a “people person” or more of a “lone wolf?”

BC: I think like most people, I have to be a bit of both. Certainly, with my craft, I lean massively on every department of talent, whether it's costume and makeup or writer, director, and producer. I stand on the shoulder of many people when I'm in front of a camera doing a role, but I also then need some separation from all of that to try and own it, to believe in what I'm doing, contain it and immerse myself in it a little bit.

That's kind of isolating, I suppose, that's work you have to do on your own. So, it's a combination. I think in life, one moment I'll be fine being in a crowd in a party, the next moment, I just want to be on my own in a room, staring at a wall with nobody but myself. I like to mix it up.

'Doctor Strange in the Multiverse of Madness' Poster. Photo Courtesy of Disney+.