‘The Black Phone’ is a touching coming-of-age story masquerading as a horror film.

Director Scott Derrickson crafts a winning supernatural movie that is focused more on the characters and less on the horror. 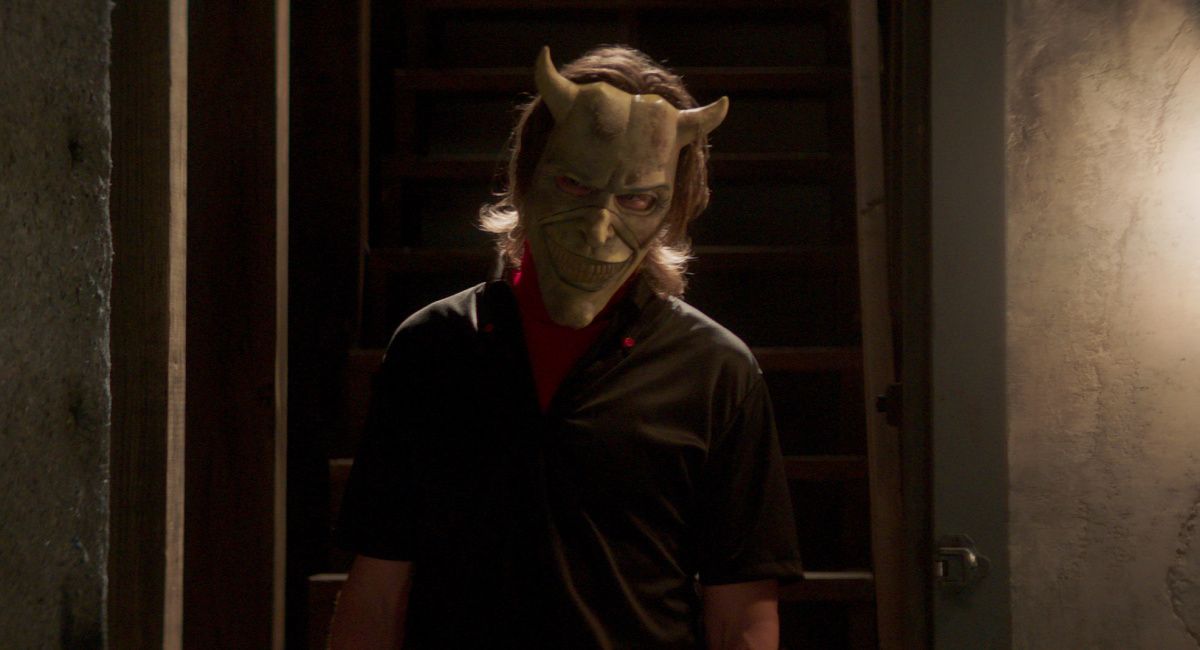 Opening in theaters on June 24th is the new supernatural horror film ‘The Black Phone,’ from producer Jason Blum (‘Us’) and director Scott Derrickson (‘Doctor Strange’).

Based on a short story by Joe Hill, Ethan Hawke stars as The Grabber, a child killer that abducts a 13-year-old boy named Finney (Mason Thames), who begins to receive calls on a disconnected phone from the killer's previous victims.

The result is a thrilling story about growing up in the 1970s, that is more interested in exploring the emotions of the kidnapped kids than the flashy villain and features superb performances from young actors Mason Thames and Madeleine McGraw.

In 1978, we are introduced to Finney (Thames) and Gwen (McGraw), who are brother and sister and living in the Denver area. Their father, Terrence (Jeremy Davies) is an abusive alcoholic raising the kids alone after his wife’s death. Like her mother, Gwen is showing signs of having psychic abilities, which angers her father. The town is on edge because a kidnapper called The Grabber (Hawke) has been abducting children, leaving only black balloons behind after the kids disappear, never to be seen again. After his best friend goes missing, Finney quickly becomes the next victim of The Grabber.

(L to R) The Grabber (Ethan Hawke) and Finney Shaw (Mason Thames) in 'The Black Phone,' directed by Scott Derrickson.

Finney is taken to a soundproof room, where he finds a disconnected phone on the wall. He begins to receive calls from The Grabber’s former victims, instructing him on how to escape. Meanwhile, Gwen is determined to find Finney, and against her father’s wishes, begins to help the police by using her powers. Now, Finney will have to summon strength that he didn’t know he had to face his fears and escape The Grabber’s hideout before it's too late.

Full disclosure, I’m not a fan of horror movies. But, I am a fan of good filmmaking and storytelling, which is why I liked ‘The Black Phone’ so much. While Scott Derrickson began his career as a horror director with ‘Sinister,’ much like Sam Raimi and James Wan, he has been able to transition to other genres within the horror world like the police drama ‘Deliver Us from Evil’ or the superhero movie ‘Doctor Strange.’ Both films had clear horror elements, even though they were basically a different genre. Derrickson does something similar here, with a horror movie that is really a coming-of-age story for the young lead characters.

The film is based on a short story by Joe Hill, who is the son of Stephen King. I mentioned this only because I saw a lot of similarities between ‘The Black Phone’ and his father’s ‘The Shining.’ Both films are set in the horror genre, but neither is really a horror movie in the classic sense. ‘The Shining’ is really a haunted house story, that just happens to feature a character with psychic abilities, but that is not the movie’s main focus. The same could be said for this film, as Gwen’s powers are not the main focus but rather an extra attraction, as the real story is about how Finney will overcome his own fears to survive.

Ethan Hawke is dazzling as The Grabber and is clearly having fun with the role in his limited screen time. Derrickson was wise to limit how much of The Grabber we see, keeping him a dark and mysterious character. Too much of the character would have taken away from Finney’s story of facing his fears and would not have had the same effect on the audience.

‘Sinister’ actor James Ransone has a very funny role in the movie, which I won’t spoil but he is perfect in the part. However, Jeremy Davies' performance as Finney and Gwen’s dad was too one-note for me. I know the character is an alcoholic, still grieving from his wife’s death, and his abuse is there to signal what Finney was too afraid to stand up to, giving him the strength to finally fight against The Grabber. But the character’s true feelings for his kids is never shown in the actor’s performance, and the child abuse scenes were just a bit too much.

But for me, the true breakout stars of the film are young actors Mason Thames and Madeleine McGraw, who were both excellent as Finney and Gwen, respectively. McGraw is absolutely believable as a young girl confused by her supernatural abilities, and her love for her brother comes is very apparent. For his role, Thames had the challenge of creating a shy and timid kid at the beginning of the film and transcending to a young man who is brave and strong enough to stand up to The Grabber. It’s surprising to see such a layered performance from an actor who is that young, which makes it all the more impressive.

In the end, ‘The Black Phone’ is a horror movie in the sense that it deals with some horrific themes, and certainly will scare you if that is what you are looking for. But it is really a movie about growing up, facing your fears, and taking control of your own life. Those are themes audiences can relate to, no matter what genre the movie is set in.

‘The Black Phone’ Receives 4 out of 5 stars.