The likes of Chris Pine, Michelle Rodriguez, Regé-Jean Page, Sophia Lillis and Hugh Grant were on hand to talk up their fantasy adventure comedy.

If there was one major take-away from the ‘Dungeons & Dragons: Honor Among Thieves’ panel at this year’s San Diego Comic-Con, it was that Hugh Grant should be on as many panels as he wants to be. Whether he’s in the show, movie, comic or game being pimped or not.

If there was another major take-away from the panel, it was that ‘Dungeons & Dragons: Honor Among Thieves’ looks like a whole lot of fun.

While ‘Dungeons & Dragons’ as a concept doesn’t have the greatest cinematic history (the 2000 version, which starred Jeremy Irons, Justin Whalin and Marlon Wayans is infamously divisive among movie fans, and scored terrible reviews), ‘Honor Among Thieves’ – or at least the footage shown at Comic-Con – is certainly on a better footing so far.

The con crowd were excited to see the likes of Grant, Chris Pine, Michelle Rodriguez, Regé-Jean Page and Sophia Lillis alongside co-writer/directors John Francis Daley and Jonathan Goldstein, plus producer Jeremy Latcham enthuse about their experiences working on the movie. 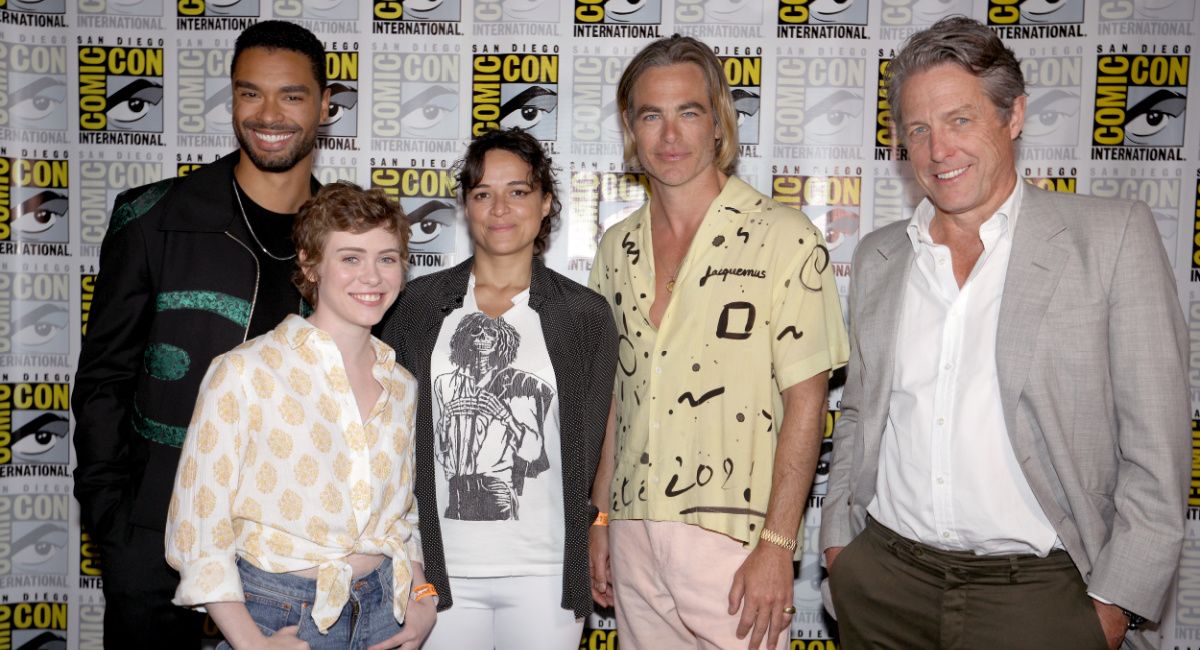 Daley and Goldstein, who previously made the likes of ‘Game Night’, both had history as D&D players, and the cast also made mention of the board games’ impact of their lives – even if it was limited to knowing it exists.

In a funny, relaxed panel dominated by Grant’s humorous reactions to every question – he ran the gamut from S&M jokes to dropping a ‘Notting Hill’ referencing while quipping that this was his first time at the Con “but we tried to come for ‘Sense & Sensibility’ – the cast and creators offered some insight into making the movie but also showed off their easy chemistry.

‘Honor Among Thieves’ promises the story of a charming thief and a band of unlikely adventurers, who undertake an epic heist to retrieve a lost relic, but things go dangerously awry when they run afoul of the wrong people.

Pine plays a Danny Ocean-in-fantasy world style character, who makes plans but also plays the lute. Rodriguez is a powerful barbarian who provides the muscle, while Page is a heroic paladin. Smith is a sorcerer, Lillis a druid and Grant appears as Forge Fletcher, a rogue and the movie’s main antagonist.

There are magical items to find (naturally) and one in particular that has unleashed a terrible evil. But basic fantasy plot aside, the movie has a very Taika Waititi feel to it, blending comedy with action and subverting our expectations.

As the panel ended, the first full trailer for the movie played (find it above) and showed off just some of what the movie will have to offer. Dragons? Check. Dungeons? Yep. Magical mayhem? Sure. Creatures galore? You betcha.

Effects teams are still hard at work on this one (Daley shouted out ILM and Legacy Effects “who brought you Baby Yoda” as the main providers) and we can expect to see ‘Dungeons & Dragons: Honor Among Thieves’ in theaters on March 3 next year.

"Who needs heroes when you have thieves?"
Not Yet RatedMar 3rd, 2023

A charming thief and a band of unlikely adventurers undertake an epic heist to retrieve a lost relic, but things go dangerously awry when they run afoul of the wrong... Read the Plot