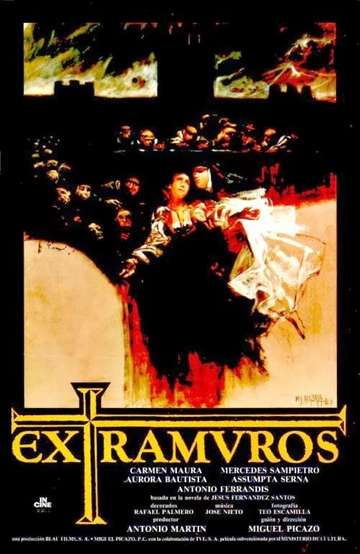 TMDb Score
53
NR 1 hr 58 minDrama, Romance
This 1985 Spanish film reveals one of the many terrible aspects of 16th century Spain, still plagued by the radical Christian Inquisition, one of a plethora of difficulties Spaniards faced at the time. Spanish super star Carmen Maura plays a nun who agrees to a selfless scam, a fake stigmata, only to avoid separation from her lover, another nun. It's a serious and passionate work, highlighting the theme of outspoken women-against-repression, seen in other good gay and lesbian films. This is not a lesbian "Nun sense" or another "Dark Habits" (by Almodovar, which also starred Carmen Maura, and also set in a Spanish convent, with some lesbian nuns). Perhaps, best of all, 'Extramuros' is realistic and frank. It isn't shy about its characters' sexuality. Their sexuality, and the film as a whole are genuine.
Show More
DirectorMiguel Picazo
StarringCarmen MauraMercedes SampietroAurora Bautista
Where to WatchFull Cast & Crew