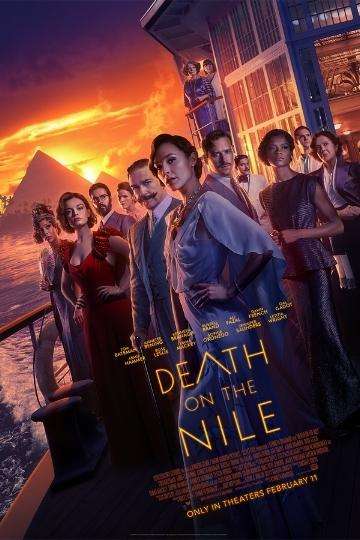 Death on the Nile (2022)Stream and Watch Online

Looking to watch 'Death on the Nile' in the comfort of your own home? Tracking down a streaming service to buy, rent, download, or view the Kenneth Branagh-directed movie via subscription can be a challenge, so we here at Moviefone want to take the pressure off.

We've listed a number of streaming and cable services - including rental, purchase, and subscription choices - along with the availability of 'Death on the Nile' on each platform when they are available. Now, before we get into the fundamentals of how you can watch 'Death on the Nile' right now, here are some specifics about the The Mark Gordon Company, Scott Free Productions, TSG Entertainment, Genre Films action flick.

Released February 11th, 2022, 'Death on the Nile' stars Kenneth Branagh, Gal Gadot, Armie Hammer, Emma Mackey The PG-13 movie has a runtime of about 2 hr 7 min, and received a user score of 65 (out of 100) on TMDb, which collated reviews from 2,510 experienced users.

'Death on the Nile' Release Dates

The King's Man
"Witness the bloody origin."
The Great Chicago Adventure
"We Heart History"
Mau Jadi Apa?
"There Are No Formulas or Theories to Answer This Question"
Angel Heart

Uncharted
"Fortune favors the bold."
The Letter
"Obsession can blur the lines of reality."

Murder on the Orient Express
"Everyone is a suspect"

The Batman
"Unmask the truth."
The Doll 3
Partikelir
"2 Friends, 1 Case, 0 Experiences"
Prisons Without Bars
American Gigolo
"He's the highest paid lover in Beverly Hills. He leaves women feeling more alive than they've ever felt before. Except one."