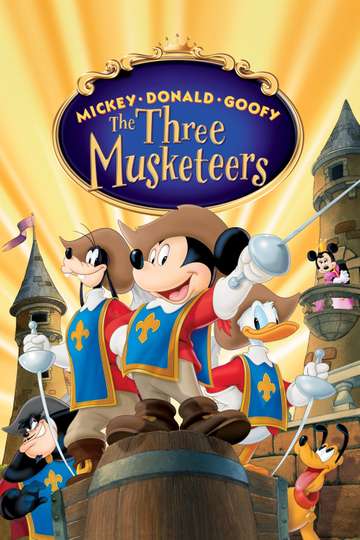 Need to watch 'Mickey, Donald, Goofy: The Three Musketeers' in the comfort of your own home? Tracking down a streaming service to buy, rent, download, or watch the Donovan Cook-directed movie via subscription can be a huge pain, so we here at Moviefone want to do the work for you.

Read on for a listing of streaming and cable services - including rental, purchase, and subscription choices - along with the availability of 'Mickey, Donald, Goofy: The Three Musketeers' on each platform when they are available. Now, before we get into the nitty-gritty of how you can watch 'Mickey, Donald, Goofy: The Three Musketeers' right now, here are some particulars about the Disney Television Animation, DisneyToon Studios adventure flick.

Released August 17th, 2004, 'Mickey, Donald, Goofy: The Three Musketeers' stars Wayne Allwine, Tony Anselmo, Bill Farmer, Russi Taylor The G movie has a runtime of about 1 hr 8 min, and received a user score of 66 (out of 100) on TMDb, which collated reviews from 752 experienced users.

You probably already know what the movie's about, but just in case... Here's the plot: "In Disney's take on the Alexander Dumas tale, Mickey Mouse, Donald Duck and Goofy want nothing more than to perform brave deeds on behalf of their queen (Minnie Mouse), but they're stymied by the head Musketeer, Pete. Pete secretly wants to get rid of the queen, so he appoints Mickey and his bumbling friends as guardians to Minnie, thinking such a maneuver will ensure his scheme's success. The score features songs based on familiar classical melodies."

Brother Bear 2
Kronk's New Groove
"The groove is on the move."
Mickey and the Beanstalk
Piglet's Big Movie
"A tale you'll never forget."
The Wild
"Start spreading the newspaper."
Tinker Bell and the Great Fairy Rescue
Stitch! The Movie
"Stitch was Experiment 626...meet the other 625!"
The Tigger Movie
Tarzan II
"The Legend Begins"
Mickey's Once Upon a Christmas
The Jungle Book 2
"Feel the jungle beat"
Mickey's Twice Upon a Christmas

Home on the Range
"Bust a Moo"
The Fox and the Hound
"A story of two friends who didn't know they were supposed to be enemies."
Pooh's Heffalump Movie
"There's something new in the Hundred Acre Wood."
Mickey's Magical Christmas: Snowed in at the House of Mouse
101 Dalmatians II: Patch's London Adventure
"A new hero unleashed."
The Rescuers
"Two tiny agents vs. the world's wickedest woman in a dazzling animated adventure!"
Lilo & Stitch 2: Stitch Has a Glitch
Mulan II
"She's primped. She's engaged. She's back."
Oliver & Company
"The first Disney movie with attitude."