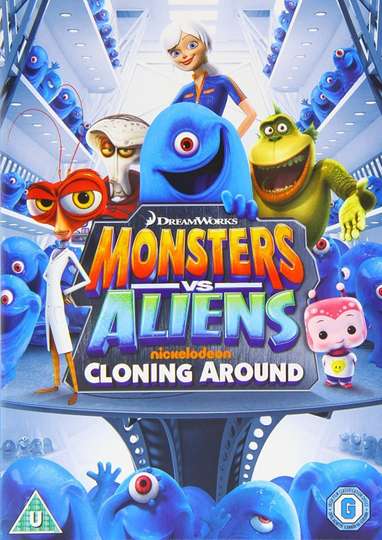 Monsters Vs Aliens: Cloning Around (2013)Stream and Watch Online

Yearning to watch 'Monsters Vs Aliens: Cloning Around' on your TV or mobile device at home? Finding a streaming service to buy, rent, download, or watch the -directed movie via subscription can be challenging, so we here at Moviefone want to do the heavy lifting.

We've listed a number of streaming and cable services - including rental, purchase, and subscription options - along with the availability of 'Monsters Vs Aliens: Cloning Around' on each platform when they are available. Now, before we get into the fundamentals of how you can watch 'Monsters Vs Aliens: Cloning Around' right now, here are some finer points about the DreamWorks Animation family flick.

Released October 15th, 2013, 'Monsters Vs Aliens: Cloning Around' stars Chris O'Dowd, Riki Lindhome, Eric Edelstein, James Patrick Stuart The G movie has a runtime of about 2 hr 56 min, and received a user score of 68 (out of 100) on TMDb, which compiled reviews from 4 knowledgeable users.

What, so now you want to know what the movie's about? Here's the plot: "DVD release of the first 15 episodes of the TV series Monsters Vs Aliens. The series picks up after the events in the Monsters vs. Aliens film. Team Monster are hanging out, relaxing at their headquarters, Area Fifty-Something, when another alien spaceship arrives. While trying to calm the hysterical President Hathaway, General W.R. Monger and the gang soon determine that the spaceship contains the alien Coverton. He says he wants to make peace with Earth, but may be in cahoots with another alien on a not-too-friendly mission. Coverton and his naughty antics feature in all of the disc’s episodes." .

The SpongeBob Movie: Sponge on the Run
"They're Not in Bikini Bottom Anymore."

'Get Shorty' Star Chris O'Dowd: 'Bluntness Works' in Hollywood, Because It's Rarer