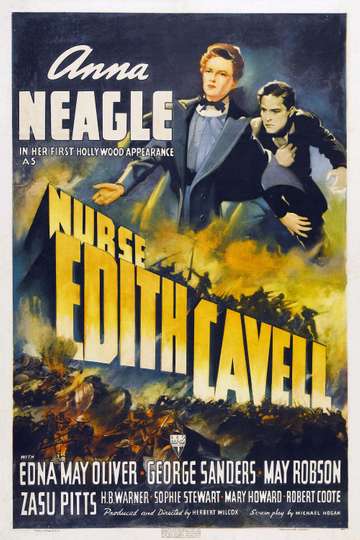 Yearning to watch 'Nurse Edith Cavell' in the comfort of your own home? Searching for a streaming service to buy, rent, download, or view the Herbert Wilcox-directed movie via subscription can be confusing, so we here at Moviefone want to help you out.

We've listed a number of streaming and cable services - including rental, purchase, and subscription alternatives - along with the availability of 'Nurse Edith Cavell' on each platform. Now, before we get into the various whats and wheres of how you can watch 'Nurse Edith Cavell' right now, here are some details about the RKO Radio Pictures, Imperadio Pictures Ltd. drama flick.

Released August 31st, 1939, 'Nurse Edith Cavell' stars Anna Neagle, Edna May Oliver, George Sanders, May Robson The movie has a runtime of about 1 hr 37 min, and received a user score of 64 (out of 100) on TMDb, which collated reviews from 8 respected users.

Interested in knowing what the movie's about? Here's the plot: "British nurse Edith Cavell (Anna Neagle) is stationed at a hospital in Brussels during World War I. When the son of a former patient escapes from a German prisoner-of-war camp, she helps him flee to Holland. Outraged at the number of soldiers detained in the camps, Edith, along with a group of sympathizers, devises a plan to help the prisoners escape. As the group works to free the soldiers, Edith must keep her activities secret from the Germans"