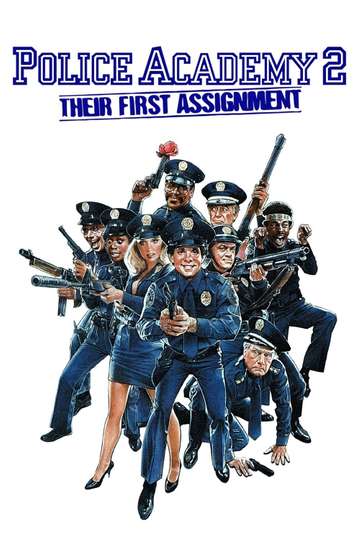 Yearning to watch 'Police Academy 2: Their First Assignment' in the comfort of your own home? Hunting down a streaming service to buy, rent, download, or view the Jerry Paris-directed movie via subscription can be a huge pain, so we here at Moviefone want to take the pressure off.

Below, you'll find a number of top-tier streaming and cable services - including rental, purchase, and subscription choices - along with the availability of 'Police Academy 2: Their First Assignment' on each platform when they are available. Now, before we get into all the details of how you can watch 'Police Academy 2: Their First Assignment' right now, here are some finer points about the Warner Bros. Pictures, The Ladd Company crime flick.

Released March 28th, 1985, 'Police Academy 2: Their First Assignment' stars Steve Guttenberg, Bubba Smith, David Graf, Michael Winslow The PG-13 movie has a runtime of about 1 hr 27 min, and received a user score of 60 (out of 100) on TMDb, which assembled reviews from 1,222 knowledgeable users.

You probably already know what the movie's about, but just in case... Here's the plot: "Officer Carey Mahoney and his cohorts have finally graduated from the Police Academy and are about to hit the streets on their first assignment. Question is, are they ready to do battle with a band of graffiti-tagging terrorists? Time will tell, but don't sell short this cheerful band of doltish boys in blue."

Funny Man
"He's cheeky & he's cruel!"
Gymkata
"The skill of gymnastics, the kill of karate."
Naked Gun 33⅓: The Final Insult
"Mostly All New Jokes."
Porky's 3: Revenge
"The final conflict"
Servant Of The People 2
The Naked Gun: From the Files of Police Squad!
"You've read the ad, now see the movie!"
Country's Family Reunion 2: Volume One
The Naked Gun 2½: The Smell of Fear
"If you see only one movie this year...you ought to get out more often"
Beverly Hills Cop II
"The Heat's Back On!"
Police Academy 4: Citizens on Patrol
"On land, on sea, or in the air, no place is safe from them!"
Crocodile Dundee
"There's a little of him in all of us."
Police Academy
"What an Institution!"
Police Academy 6: City Under Siege
"The Grads are going undercover in the city to unmask the mastermind of crime."
The Rifleman of the Voroshilov Regiment
Tomboy
"It's not just a man's world anymore."
Warlock III: The End of Innocence
"He'll take your soul... if you let him"
Police Academy 3: Back in Training
"Run for cover!"
Police Academy 5: Assignment Miami Beach
"Hold everything! The cadets are dropping in on Miami Beach for an all new adventure."
Police Academy: Mission to Moscow
"Just when we thought the Cold War was over, leave it to these guys to heat it up again."
Five Brides