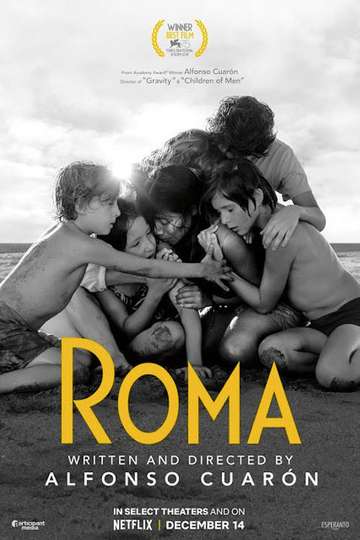 "There are periods in history that scar societies and moments in life that transform us as individuals."
TMDb Score
77
R 2 hr 15 minDec 14th, 2018Drama
In 1970s Mexico City, two domestic workers help a mother of four while her husband is away for an extended period of time.
DirectorAlfonso Cuarón
StarringYalitza AparicioMarina de TaviraDiego Cortina Autrey
Movie DetailsWhere to WatchFull Cast & CrewNewsBuy DVD

As a director, writer, producer -- and sometimes documentarian -- Alfonso Cuarón seems like he's been a fixture of the cinema for years. Indeed, it's surprising to realize he's only directed eight films since his 1991 debut, "Solo con Tu Pareja." This is possibly because his last three --"Harry Potter and the Prisoner of Azkaban," "Children of Men," and "Gravity" -- all in one way or another became an immediate part of the pop culture firmament, earning accolades or box office glory or supplying the world with a prescient look at humanity, technology, and the magic in between -- the magic of creation, if nothing else.

But even for a constant inventor and fearless experimenter, his latest, "Roma" is something special, something unique -- an intimate, even sometimes slight drama given poetry and emotional resonance as it's projected against the backdrop of not just Mexican history, but his own. Shot in black and white, starring a nonprofessional actress, and set in a time and place seldom explored in mainstream cinema -- that is, until a filmmaker like Cuarón has the personal investment, and perhaps more importantly, the authority to shine a light upon it -- "Roma" tells a deeply humane, enchanting story that easily ranks among the best and most indelible of 2018.

If Beale Street Could Talk
"Trust Love All The Way"

Spider-Man: Into the Spider-Verse
"More than one wears the mask."
The Ballad of Buster Scruggs
"Stories live forever. People don't."
First Reformed
Black Mirror: Bandersnatch
Shoplifters
"Sometimes you choose your family."
Isle of Dogs
"Welcome to the Isle of Dogs."

Bohemian Rhapsody
"Fearless lives forever"
Can You Ever Forgive Me?
"Her greatest work will be her biggest crime."
Fauve
The Wife
"Secrets lie between the lines."
Cold War