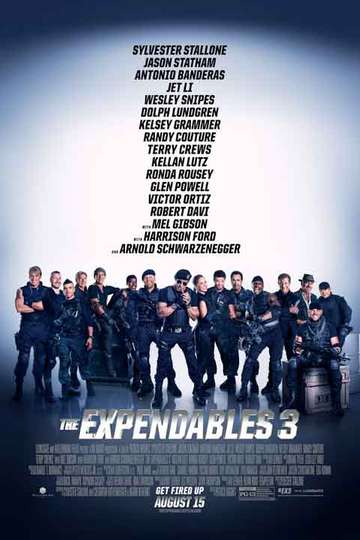 The Expendables 3 (2014)Stream and Watch Online

Looking to watch 'The Expendables 3' on your TV, phone, or tablet? Hunting down a streaming service to buy, rent, download, or view the Patrick Hughes-directed movie via subscription can be challenging, so we here at Moviefone want to help you out.

Read on for a listing of streaming and cable services - including rental, purchase, and subscription options - along with the availability of 'The Expendables 3' on each platform when they are available. Now, before we get into all the details of how you can watch 'The Expendables 3' right now, here are some specifics about the Davis Films, Nu Image, Millennium Films, Lionsgate, Ex3 Productions, Fipex Holding action flick.

Released August 15th, 2014, 'The Expendables 3' stars Sylvester Stallone, Jason Statham, Harrison Ford, Arnold Schwarzenegger The PG-13 movie has a runtime of about 2 hr 6 min, and received a user score of 62 (out of 100) on TMDb, which put together reviews from 4,175 experienced users.

Interested in knowing what the movie's about? Here's the plot: "Barney, Christmas and the rest of the team comes face-to-face with Conrad Stonebanks, who years ago co-founded The Expendables with Barney. Stonebanks subsequently became a ruthless arms trader and someone who Barney was forced to kill… or so he thought. Stonebanks, who eluded death once before, now is making it his mission to end The Expendables -- but Barney has other plans. Barney decides that he has to fight old blood with new blood, and brings in a new era of Expendables team members, recruiting individuals who are younger, faster and more tech-savvy. The latest mission becomes a clash of classic old-school style versus high-tech expertise in the Expendables’ most personal battle yet."

Transformers: Age of Extinction
"This is not war, it's extinction."

Transporter 2
"The Best In The Business Is Back In The Game."

Dawn of the Planet of the Apes
"One last chance for peace."

Need for Speed
"For honor. For love. For redemption."

RoboCop
"We've got the future under control."

X-Men: Days of Future Past
"To save the future, they must alter the past."
Transporter 3
"This time, the rules are the same. Except one."
The Transporter
"Rules are made to be broken."

Hercules
"Before he was a legend, he was a man."

Escape Plan
"No one breaks out alone."