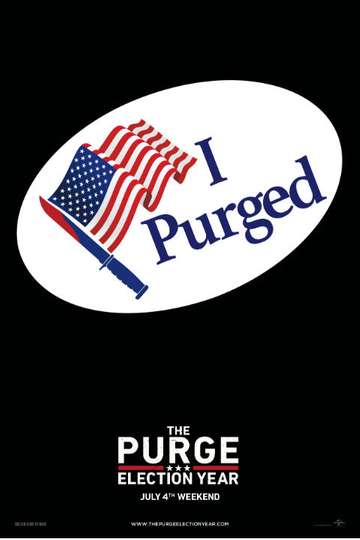 "Keep America great"
TMDb Score
64
R 1 hr 45 minJul 1st, 2016Action, Thriller, Horror
Two years after choosing not to kill the man who killed his son, former police sergeant Leo Barnes has become head of security for Senator Charlene Roan, the front runner in the next Presidential election due to her vow to eliminate the Purge. On the night of what should be the final Purge, a betrayal from within the government forces Barnes and Roan out onto the street where they must fight to survive the night.
Show More
DirectorJames DeMonaco
StarringElizabeth MitchellFrank GrilloMykelti Williamson 'The Purge 5' Planned as Final Film in Franchise: 'It Will Be a Really Cool Ending'

The First Purge
To push the crime rate below one percent for the rest of the year, the...

Ouija: Origin of Evil
In 1965 Los Angeles, a widowed mother and her two daughters add a new...

Sinister 2
A young mother and her twin sons move into a rural house that's marked...

Central Intelligence
After he reunites with an old pal through Facebook, a mild-mannered ac...

Ouija
A group of friends must confront their most terrifying fears when they...