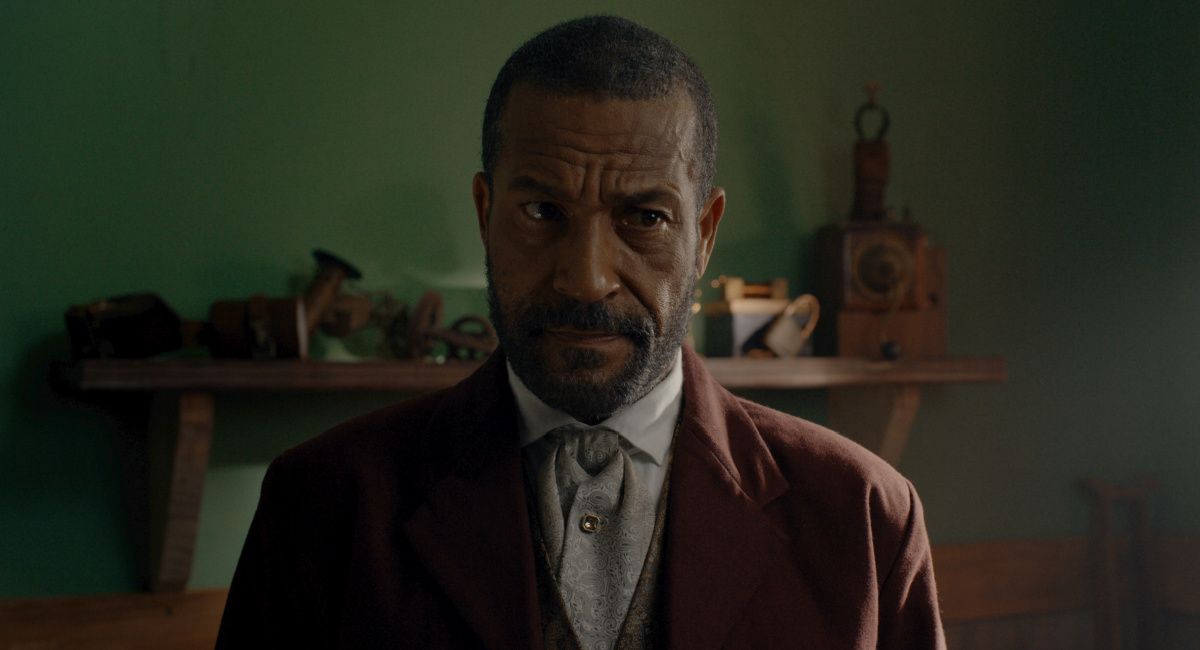 Phil Morris in 'Ghosts of the Ozarks'

The new movie takes place in post-Civil War Arkansas, as a young doctor, James McCune (Hobson) is mysteriously summoned to a remote town in the Ozarks only to discover that the utopian paradise is filled with secrets and surrounded by a menacing, supernatural presence. The town’s leader is James’ uncle, Matthew McCune (Morris), who may know more than it seems about the town’s strange ghost problem.

Moviefone recently had the chance to speak with Phil Morris about his work on ‘Ghosts of the Ozarks.’

Moviefone: To begin with, as an actor, can you talk about the challenge of working within a period piece? Is it more challenging than playing a character from your own time period?

Phil Morris: It's an interesting question because here's what I think. When you're so adorned with wardrobe, makeup, the sets and the background and everything is so period perfect, it's almost as though you have to try to get it wrong. You know what I mean? It gives you a great cover for you as an actor, and it informs you more and more. I've done a lot of 'Star Trek,' and every time I put on the wardrobe or the makeup of a Klingon, you know who you are. In this movie, it was no different.

I was very fortunate to have some of the best makeup people, wardrobe people and hair people. So, each layer of the character, interestingly enough, gets layered on as you hit the makeup trailer, as you sit in the chair. It's a process that I, as an actor, really appreciate. It informs me more and more every day that I go in and it sets up the character more and more.

Yes, you do have to do your research on that period, on people of the period, what they looked like, how they sounded, how they stood, and how they walked. That informs you going forward as to how this character behaves and what their wants and dislikes are.

MF: What can you tell us about your character Matthew, and the utopia that he has created in this small town?

PM: Well, at the time, there were a few communities of color and diversity in the United States that were trying this grand experiment of inclusion. One of the most famous is Tulsa in Oklahoma and Black Wall Street, and we all know what happened there. Or if you don't, check out your history. So, there were several attempts to try and bring this country together in these communities, so our community is no different.

Matthew's different in that there's the phrase that “power corrupts, and absolute power corrupts absolutely,” and that's what happens to Matthew. I believe Matthew had all the good intentions, and all the right intentions. My prep for Matthew was that he was an ex-slave, but he was a very educated ex-slave. He learned control and he learned manipulation from his masters, from his overseers. How else would he get it? How else would he know it?

So, when he comes to town and he has all the best intentions, as everybody does, and he realizes what is really in the town, that sense of control that he learned from his white masters starts to overwhelm him. I believe that the difficulty of being a Black man at that time never left him, so there was always an underlying sense of difficulty, upset, and revenge.

So, when he had the chance to exert his power, in the movie, we see what happens. It was a very difficult character for me to play, very complex, and very nuanced. I had a very difficult time approaching him, because I knew that his controls were not mine, not Phil Morris' controls. But I had to commit to this character of Matthew so that he lived and breathed beyond Phil Morris.

Like I said, he's using the same controls that are used on him in a way. Not physically, not beating people and whipping them, but mentally subjecting them to a servile role almost in a way. They were doing his bidding. So, that was hard for me. It isn't who I am as a human, and I had to make him believable and real. So, I had to own those controls, and that was a challenge quite honestly.

MF: On one level the movie tells an entertaining supernatural story, but on another level, it also deals with serious real-world themes. Was it nice to be in a project that really does both, educate and entertain?

MF: What was it like for you to work with your co-star, Thomas Hobson?

PM: I had never met Tommy before the film, but I knew he was very good friends with Tara, Jordan and Matthew. I had worked with Tara on another little short film, so meeting Tommy, we met working on one of our most difficult days. What I realized about him was that he was just a game actor. He was ready to go. He was fearless, and that is beautiful to get into a scene, especially with somebody that you really don't know. You're trying to create this relationship that you've had for his whole life.

To be with an actor who's willing to throw down, who's willing to kind of "go there with you" is a joy. That's who Tommy Hobson is. He's incredibly talented. He's a triple threat. He's a dancer, he is a singer, he's an actor, and he brought something really special to this role. I think that the audience will see it and our relationship is palpable. I don't know where this comes from. I really don't know where actors get this from, this instant ability to connect and make real these relationships that are really kind of "add water and mix."

I don't want to know everything. I like to be surprised. I like to be excited. I like to be thrilled and titillated. So, to work with another actor like Tommy Hobson, as the actor, I am entertained as well. I'm taken on a ride as well, and that's the best way to work.

MF: Finally, I know you only have one scene with him, but what was your experience like working with Tim Blake Nelson?

PM: He was fantastic. I mean, this man has depth of creativity that a lot of us wish to have. So again, where Tommy's a younger actor and not as experienced, working with Tim, or Angela Bettis, or David Arquette, those are more versatile, vintage, veteran actors that bring so much. It's like your wardrobe, right, what we just talked about. When they bring that much, it's best to just let it play.

You have to get in there and play, and respond to this amazing energy. They bring this spirit, an actor like Tim Blake Nelson, that is so engaging for you as a performer, there's no acting involved. You're just being, and you're just involved in this reality that they make much more palpable because of how much they bring to it. It was just a joy. It's not working at all, it's playing. It's collaboration on the highest level.

Tim Blake Nelson in 'Ghosts of the Ozarks'