Moviefone speaks with producers Phil Lord and Cristopher Miller, as well as their cast, about their new Apple TV+ series ‘The Afterparty.’ 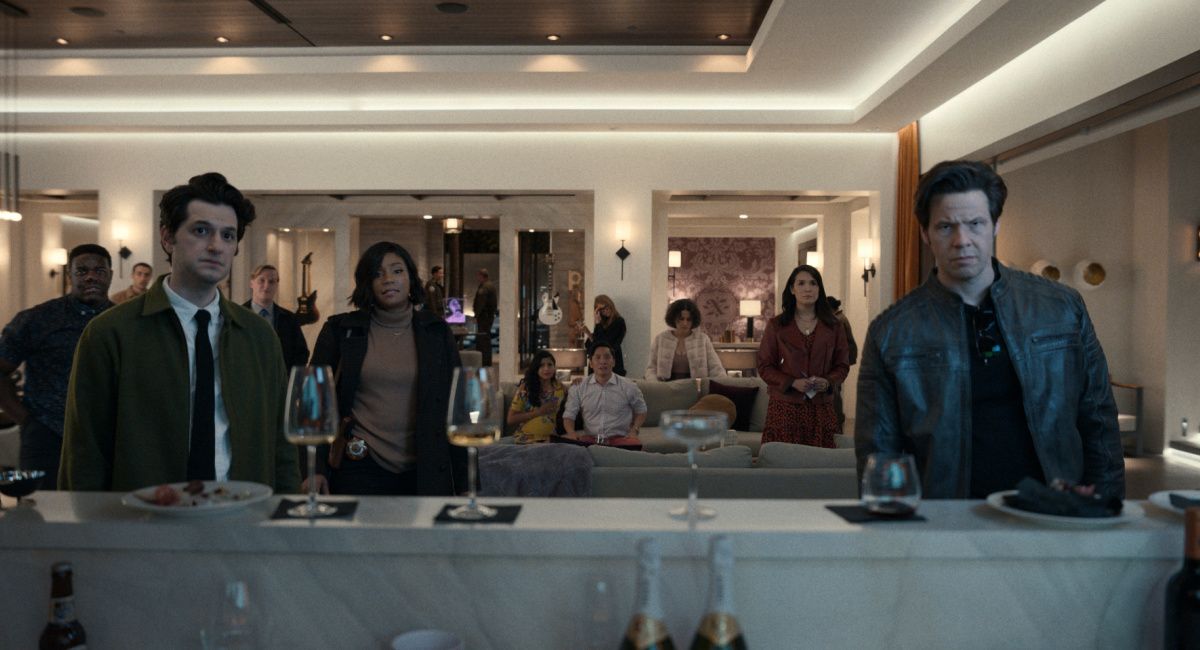 ‘The Afterparty’ revolves around a murder that takes place at a high school reunion after party, and each episode is told from a different character’s point of view. Lord and Miller serve as executive producers and both co-wrote several episodes, with Miller also directing the entire series.

Moviefone recently had a chance to speak with Phil Lord and Christopher Miller about their new Apple TV+ series, as well as some of the cast from ‘The Afterparty’ Including Sam Richardson, Ben Schwartz, Zoe Chao, Ike Barinholtz, Dave Franco, and Ilana Glazer.

Below you can read our full interview with Phil Lord and Christopher Miller about ‘The Afterparty,’ or you can watch the complete set of interviews in the video player above.

Moviefone: Chris, can you begin by talking about the genesis of the idea for the series, and also deciding to have each episode focus on a different character’s point of view?

Christopher Miller: It was a little over a decade ago that I had the idea to tell a murder mystery in a Rashomon style where each suspect would tell their version of the evening and it would be wildly different from the other ones. We were going to make it, we wrote it as a movie, and then we got busy making ‘The Lego Movie’ and ‘Spider-Man: Into the Spider-Verse’ and whatnot.

But when we got a breath of air, we revisited it and thought this would work better as a series because in a movie, you didn't have time to really dig to each character. But as a series, you could give each character their own episode and really understand them as more complex characters. You could really learn to empathize and love each of them, and hope that they didn't do it. So, as that was evolving, we realized that to push their style of storytelling, stylistically and thematically, we can make each episode feel like a different genre of filmmaking and storytelling.

Then it evolved even farther, and we got an amazing writing staff full of really cool people. With the structure and outline already intact, they were able to turn it into something really special. But it was a really mind exploding process because if you're working on episode four and you want to change something there, it affects everything in all the other episodes. So, you have to keep the whole thing in your head like this giant machinery of a massive clock in your head. It would really explode people's heads from time to time.

MF: Phil, was making a murder mystery something you always wanted to do?

Phil Lord: I think Chris and I are fans of ‘Clue,’ ‘The Last of Sheila’ and ‘Murder by Death.’ There's a long proud history of mixing comedy and murder and we've always been interested in what's a unique way to pull that off. Chris had been developing this as a script for a long time for a feature. When he thought of the idea of breaking it into episodes, and then each of those episodes would have its own filmmaking style and you would get to know each of these characters even more deeply, that's when it really took off for us and felt like it was going to be worth doing.

MF: Phil, because each episode contains events seen from different characters perspectives, can you talk about how production actually worked?

PL: So, the whole show, more or less, we batch shot it. Meaning that we would shoot a scene in a hallway that was like a fun rom-com and then, "Okay everyone, let's go to lunch, we'll come back and now it's a dark thriller." That's part of the fun of it, honestly, but the poor actors did need a second to switch modes.

MF: Chris, can you talk about the impressive cast of actors you assembled and the challenges for them with the different tones in each episode?

CM: We got so lucky to get like a real murderer's row, pun intended, of comedy geniuses. What was especially great about all of them is that so many of them are writers, filmmakers or show creators in their own rights. So, they really were smart about also holding this whole show in their heads, because asking an actor to be able to just do a character is one thing, but to do a character with eight different shadings of that character is a really big ask. It has to be people who are really smart and savvy, and luckily, they all were amazing, and they added so much to it. We all had a great time together and it was a real love fest. You could really feel the chemistry and joy on the screen.