The film, written by ‘Bohemian Rhapsody’s Anthony McCarten, has Kasi Lemmons in the director’s chair and chronicles the singer’s career.

Biopics are still big business in Hollywood, and it’s not tough to see why – there’s the built-in fanbase of audiences eager to see an icon from another industry brought to screens, and when it comes to music industry movies – assuming you can secure the rights to the singer’s library – there are superb, memorable tunes to sprinkle throughout the movie.

The latest example is headed our way this holiday season, and it’ll see Naomi Ackie playing music icon Whitney Houston. Ackie might be best known for movies such as ‘Star Wars: The Rise Of Skywalker’, ‘Yardie’ and ‘Lady Macbeth’.

Directed by ‘Eve’s Bayou’ and 'Talk To Me’s Kasi Lemmons, ‘I Wanna Dance with Somebody’ is described as a no-holds-barred portrait of the complex and multifaceted woman behind "The Voice." From New Jersey choir girl to one of the best-selling and most awarded recording artists of all time.

And the script comes from Anthony McCarten, who has become a past master at writing biopics, having helped bring ‘Bohemian Rhapsody’ (Freddie Mercury), ‘The Theory of Everything’ (Stephen Hawking), and ‘Darkest Hour’ (Winston Churchill) to screens. McCarten has been nominated for several Oscars for his work, so it’s not surprising that he got this gig. 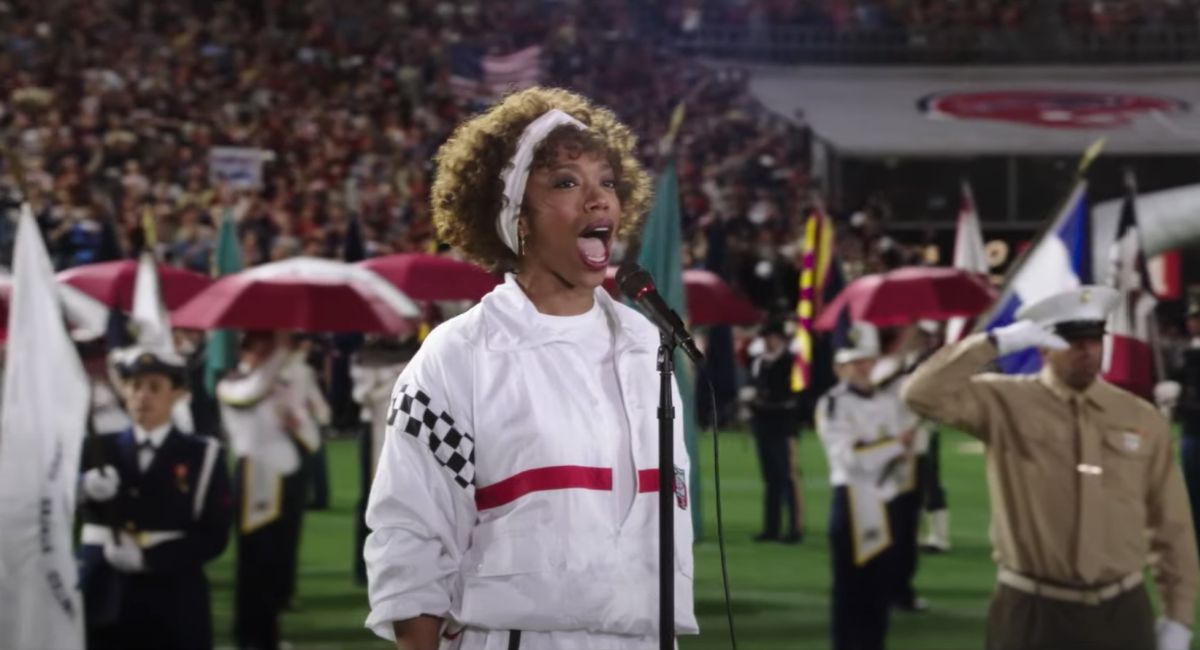 Naomi Ackie as Whitney Houston in 'I Wanna Dance with Somebody.'

With McCarten and Lemmons guiding it, the film will hopefully prove to be more than just a greatest hits rundown of Houston’s life and career, though given the subject matter, those hits certainly are great. We’re promised her journey from the church choir to her massive breakthrough into the music industry and her knock-out (and record-setting) performances and songs, including her memorable 1991 Super Bowl rendition of the national anthem.

Playing such an icon is no easy task, and even Ackie admits that she was intimidated. “She’s been elevated in my life for so long that it felt like an impossible thing to achieve at times,” Ackie told People. “But so many people told me the same thing: If I wasn’t scared and nervous, they’d think something was wrong with me… The biggest challenge was letting my fear of the magnitude of this task take a back seat. Nothing good comes from sitting in fear for too long.”

If there’s any concern, it’s the presence of Houston’s longtime collaborator and producer, Clive Davis (played here by Stanley Tucci) among those backing the movie, which makes us ponder how warts-and-all it might be. That said, ‘Rocketman’ featured full input from Elton John and he didn’t order the filmmakers to sidestep his faults.

The cast for this one also includes Ashton Sanders, Tamara Tunie, Nafessa Williams and Clarke Peters, and ‘I Wanna Dance with Somebody’ will be in theaters on December 21st.

Naomi Ackie as Whitney Houston in 'I Wanna Dance with Somebody.'

I Wanna Dance With Somebody

The joyous, emotional, heartbreaking celebration of the life and music of Whitney Houston, the greatest female R&B pop vocalist of all time. Tracking her journey... Read the Plot