Moviefone speaks with Neil LaBute about Talks 'House of Darkness.’ "It seemed like a great springboard to use horror as an end, rather than a means to an end."

Opening in theaters on September 9th and on demand and digital on September 13th is the new horror movie from acclaimed writer and director Neil LaBute entitled ‘House of Darkness.’

The movie stars Justin Long (‘Barbarian’) as Hap Jackson, a regular guy who drives home a girl named Mina Murray (Kate Bosworth) after just meeting her at a bar. Mina invites Hap in for another drink, and he eventually meets her sister Lucy (Gia Corvatin). As the night goes on, Hap begins to suspect that his hosts may be vampires.

Writer/director Neil LaBute has made several acclaimed films including ‘In the Company of Men,’ ‘Nurse Betty,’ ‘The Wicker Man,’ ‘Death at a Funeral,’ and his most recent, ‘Out of the Blue,’ which is still in theaters.

Moviefone recently had the pleasure of speaking with filmmaker Neil LaBute about his work on ‘House of Darkness,’ having two films releasing at the same time, reimagine Bram Stoker’s ‘Dracula,’ the horror genre, and working with Justin Long and Kate Bosworth. 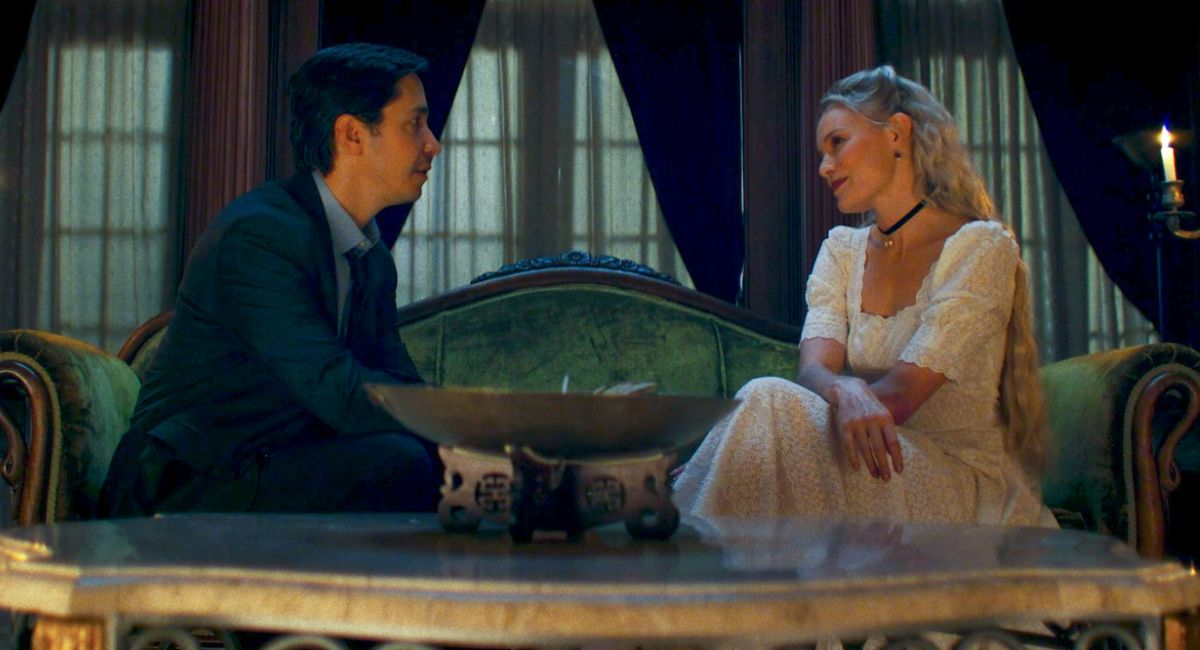 You can read the full interview below or click on the video player above to watch our interview with Neil LaBute about ‘House of Darkness.’

Moviefone: We recently spoke to you about your noir film ‘Out of the Blue,’ and now you have the horror movie ‘House of Darkness’ coming out. As a director, what is it like having to films that are so different in genre basically releasing at the same time.

Neil LaBute: Well, certainly they were made with some space in between them, but then suddenly they line up right next to each other. It's probably more likely you see it with actors, they have that happen not often but sometimes, even in the same week occasionally. So, with writer and directors, it's a little more irregular, but I'm pretty irregular. So, it's nice to have a surprise of a couple of movies to hold over my seven fans. It's nice to have two movies to give them just like that.

MF: It seems that many of your films examine men and women and the way they communicate with each other. Can you talk about applying that idea to this horror genre?

NL: It actually seemed like a great springboard to use horror as an end, rather than a means to an end. Instead of taking something like when West Craven said, “I’ll take ‘The Virgin Spring’ and I'm going to make ‘The Last House on the Left’ instead as a remake. I thought I've done a lot of relationship stuff. If I start out making something that it could go to be a rom-com, it could be just one of those weird dates. There was a movie that Tom Newman made years ago that won Sundance called ‘What Happened Was,’ which I love. It's all in his apartment, it's kind of a date that goes not bad, but just sideways.

So, I started to make one of those movies about a date that goes sideways and then goes really sideways. Then from there, did a springboard onto the horror idea. So, I wanted to just mash my commentary of how men and women and the way that power gets shifted between people in relationships. Often, we feel like, oh, men have that unwritten power, even a physical power in a relationship, and how quickly that can change within the confines of something like a horror genre.

MF: Can you talk about the influence you took from Bram Stoker’s ‘Dracula?’

NL: Well, I've worked on the ‘Dracula’ text in a couple of ways in the past. I developed it for a theater production and that was something that I found really fun to try and put that epistolary novel on stage. I worked on the ‘Van Helsing’ television show for Syfy and we took that and modernized that idea.

We even it went so far as to have a female Dracula because it's such a strong and pliable myth, it's one that allows you to take pieces from it. For me, it was taking those weird sisters that are talked about and using them in a new kind of modern, fun way.

Justin Long as Hap Jackson in the thriller, 'House of Darkness,' a Saban Films release. Photo courtesy of Saban Films.

MF: Hap Jackson is a character that seems to not be able to read the room. Can you talk about creating the character and working with Justin Long?

NL: He's got the worst game in the world basically. I think what was maybe even appealing to Justin when he read it was how much we rely on him as both an actor and as a persona. I think people that are looking through People Magazine go, “I like that guy.” Even if you don't know his name, it's like, he's funny.

People associate you often with the number of characters that they've seen you do, and he's done horror and he's done comedy. So, he fit well into this world. I think when you like somebody, just in a relationship, you tend to give them a lot of rope. So, what might have been immediately seen as, “this is really bad or asshole behavior,” that someone's going to go, “Oh, he's just trying to be funny. He just really likes this girl.”

So, it allowed that character to grow from a guy who self-professes to be a nice guy to show his true colors. Even toward the end of the film, he feels like he still controls the room. As a man, I'll just tell you what to think and what's going to happen, and I'm going to leave now. It's fun to watch him just take those steps into a place that he's actually not so in control of. But Justin being a nice guy allows you, I think and the audience to go further than you would with another actor.

Kate Bosworth as Mina Murray in the thriller, 'House of Darkness,' a Saban Films release. Photo courtesy of Saban Films.

MF: Can you talk about casting Kate Bosworth and what she brings to the character of Mina?

NL: She’s sort of from another world. We were trying to figure out costumes for her and suddenly she gravitated toward this thing that looked like it was out of ‘Dark Shadows,’ the TV show, like this 1960s version of horror. It was like another person couldn't pull it off. She had this long hair and a choker. But we were also careful to have Justin say, "Hey, I met this girl and she's weird, but she's so appealing." So, that's what makes her appealing is that she's so different. He doesn't realize quite how different she is.

But Kate really just took those ideas and ran with them. She wanted to be attractive in the most obvious ways. But again, as you say, those red flags should be going off. Yet we're often so blinded by our attractions that we don't see the problems that are right in front of us. That's for everybody in their dating lives, as well as watching a movie or children's theater, where you're sitting in the audience screaming that the villain is right behind you. But you don't notice, you don't notice the big bad wolf is in the room.

MF: Finally, we’ve spoken before about how you like to let master shots play out and that you don’t like to do a lot of coverage and cut in between. Can you talk about that in terms of working within this genre and making this film?

NL: I mean, this was to the nth degree of what I was talking about before. There's much more dialogue in ‘House of Darkness’ than say ‘Out of The Blue’ and the actors really had to come in. I had worked with Justin in the theater previously. Kate has done some, I don't know how far back it goes if it was in high school, but Gia and Lucy Walters certainly had a background in theater.

So, everybody kind of came in knowing we've got a short amount of time. We've got to learn this like a play and just really be adept, and I’m going to let that camera run. So, we're going to set the pace of what's happening, the suspense, the mood, if it's funny, rather than have a lot of cuts.

So, I think it's nice to watch actors act in the same frame. It's great to cut back and forth as well but it's really nice to see how that thing between them, especially with Justin and Kate, what turned out to be real chemistry on day one that you could see. I was like, “Oh, these people were just sitting in a car and I can see and hear that they just really play off each other really well.” From then on, it was just a great connection that allowed them to go where those characters needed to go.

The 21 Best Vampire Movies, Ranked From 'Dracula' to 'Blade'

15 Things You Never Knew About 'The Monster Squad'