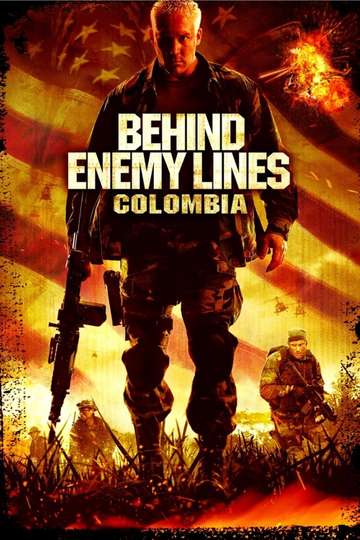 Looking to feast your eyes on 'Behind Enemy Lines III: Colombia' on your TV, phone, or tablet? Hunting down a streaming service to buy, rent, download, or watch the Tim Matheson-directed movie via subscription can be a challenge, so we here at Moviefone want to take the pressure off.

Read on for a listing of streaming and cable services - including rental, purchase, and subscription options - along with the availability of 'Behind Enemy Lines III: Colombia' on each platform when they are available. Now, before we get into all the details of how you can watch 'Behind Enemy Lines III: Colombia' right now, here are some specifics about the 20th Century Fox Home Entertainment, WWE Studios action flick.

Released January 6th, 2009, 'Behind Enemy Lines III: Colombia' stars Keith David, Ken Anderson, Joe Manganiello, Channon Roe The R movie has a runtime of about 1 hr 34 min, and received a user score of 57 (out of 100) on TMDb, which assembled reviews from 127 top users.

You probably already know what the movie's about, but just in case... Here's the plot: "Navy SEALS mount an attack on Colombian special forces to clear their names and rescue a hostage."

A Beautiful Mind
"He saw the world in a way no one could have imagined."

We Were Soldiers
"400 U.S paratroopers. 4,000 Vietnamese soldiers. 12,000 miles away from home. 1 man led them into battle."
Beverly Hills Cop III
"In for the ride of his life!"
Behind Enemy Lines
"His only weapon is his will to survive."

American Sniper
"The most lethal sniper in U.S. history."

The Dark Knight
"Welcome to a world without rules."
The Matrix
"Welcome to the Real World."

Troy
"For passion. For honor. For destiny. For victory. For love."

Titanic
"Nothing on Earth could come between them."
Behind Enemy Lines II: Axis of Evil
"The fate of the world hangs in the balance in this explosive action-thriller."

Ice Age
"They came. They thawed. They conquered."
Beverly Hills Cop II
"The Heat's Back On!"
Enemy at the Gates
"Some Men Are Born To Be Heroes."

Four Brothers
"They came home to bury mom... and her killer"
Beverly Hills Cop
"The Heat Is On!"