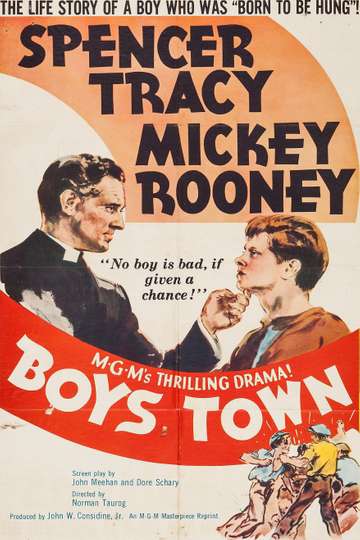 "No boy is bad, if given a chance!"
TMDb Score
67
NR 1 hr 36 minSep 9th, 1938Drama
The devout but iron-willed Father Flanagan leads a community called Boys Town, a different sort of juvenile detention facility where, instead of being treated as underage criminals, the boys are shepherded into making themselves better people. But hard-nosed petty thief and pool shark Whitey Marsh, the impulsive and violent younger brother of an imprisoned murderer, might be too much for the good father's tough-love system.
Show More
DirectorNorman Taurog
StarringSpencer TracyMickey RooneyHenry Hull
Movie DetailsWhere to WatchFull Cast & CrewBuy DVD

The Bourne Identity
Wounded to the brink of death and suffering from amnesia, Jason Bourne...

The Bourne Supremacy
When a CIA operation to purchase classified Russian documents is blown...

Brave
Brave is set in the mystical Scottish Highlands, where Mérida is the p...

The Old Man and the Sea
Santiago is an aging, down-on-his-luck, Cuban fisherman who, after cat...

Ben-Hur
In 25 AD,Judah Ben-Hur, a Jew in ancient Judea, opposes the occupying...

The Bourne Ultimatum
Bourne is brought out of hiding once again by reporter Simon Ross who...

The Defiant Ones
Two convicts—a white racist and an angry black man—escape while chaine...