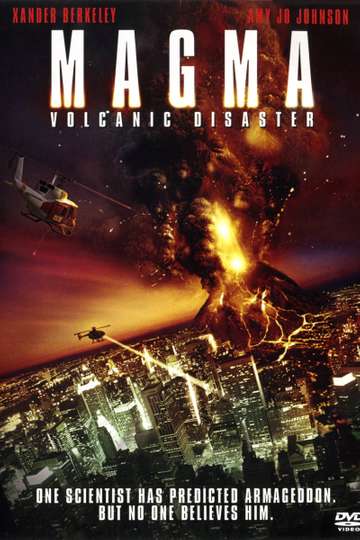 Fancy watching 'Magma: Volcanic Disaster' on your TV or mobile device at home? Searching for a streaming service to buy, rent, download, or view the Ian Gilmore-directed movie via subscription can be difficult, so we here at Moviefone want to do the heavy lifting.

Read on for a listing of streaming and cable services - including rental, purchase, and subscription options - along with the availability of 'Magma: Volcanic Disaster' on each platform when they are available. Now, before we get into the various whats and wheres of how you can watch 'Magma: Volcanic Disaster' right now, here are some particulars about the ApolloScreen Filmproduktion GmbH & Co. Filmproduktion KG, Magma Productions action flick.

Released January 21st, 2006, 'Magma: Volcanic Disaster' stars Xander Berkeley, Amy Jo Johnson, Reiko Aylesworth, David O'Donnell The PG-13 movie has a runtime of about 1 hr 26 min, and received a user score of 64 (out of 100) on TMDb, which assembled reviews from 42 knowledgeable users.

Curious to know what the movie's about? Here's the plot: "When a volcano expert becomes convinced that a cataclysmic natural disaster is about to unfold, a volcanologist Professor John Shepherd and his graduate students believes that recent unexplainable volcanic activity as all of the volcanoes in the world are going to erupt and kill every living thing on the planet! They try to convince the government that their theory is true not a joke while also trying to figure out how to stop it before time runs out!"

Global Meltdown
MegaFault
"A crack in the world has started... we have 24 hours to stop it."
Skyfire
"The mountain is waking up"
Asteroid
"An unhappy family. FBI at the door.No Wi-Fi. Could this day get any worse?"
Volcano
"The coast is toast."
Super Eruption
"You Can't Fight Mother Nature."
Meltdown: Days of Destruction
San Andreas Mega Quake
Asteroid vs Earth
"Heaven is falling, so Earth must move"
The Earthquake
Nature Unleashed: Earthquake
"Where Will You Be?"
Meltdown
Earthquake in New York
Airplane vs Volcano
Into the Inferno
"What we worship can destroy us"
Miami Magma
Eruption: LA
Disaster Zone: Volcano in New York
Asteroid
"The End Of The World Is Just Beginning."
Lava Storm
"A family must survive the Lava Storms, which could mean the end of the world as we know it"
Snowmageddon