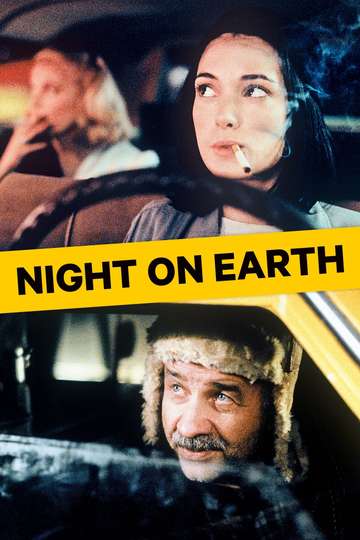 Want to behold the glory that is 'Night on Earth' on your TV, phone, or tablet? Hunting down a streaming service to buy, rent, download, or watch the Jim Jarmusch-directed movie via subscription can be a challenge, so we here at Moviefone want to do the heavy lifting.

Read on for a listing of streaming and cable services - including rental, purchase, and subscription choices - along with the availability of 'Night on Earth' on each platform when they are available. Now, before we get into the various whats and wheres of how you can watch 'Night on Earth' right now, here are some particulars about the Pandora Film, Channel Four Films, JVC, Le Studio Canal+, Locus Solus Entertainment, Pyramide Productions, Victor Musical Industries, Inc. comedy flick.

Released May 1st, 1992, 'Night on Earth' stars Winona Ryder, Gena Rowlands, Giancarlo Esposito, Armin Mueller-Stahl The R movie has a runtime of about 2 hr 8 min, and received a user score of 76 (out of 100) on TMDb, which put together reviews from 640 well-known users.

Interested in knowing what the movie's about? Here's the plot: "An anthology of 5 different cab drivers in 5 American and European cities and their remarkable fares on the same eventful night."

'Night on Earth' is currently available to rent, purchase, or stream via subscription on Criterion Channel, Amazon Video, and HBO Max .

Ultimate Justice
"Kill or Be Killed"

Code Name Banshee
"Two assassins. One secret. No turning back."
Mystery Train
Stranger Than Paradise
True Lies
"When he said I do, he never said what he did."
Delicatessen
"A futuristic comic feast."

Coffee and Cigarettes
The Limits of Control
"For every way in, there is another way out."

Gasoline Alley
"Justice gets dirty."
Legacy
"The hunt is on."
Permanent Vacation

Shattered
They Live by Night
"Cops or no cops I'm going through!"