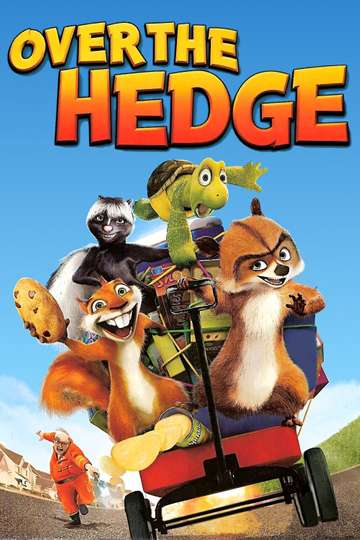 Over the Hedge (2006)Stream and Watch Online Want to watch 'Over the Hedge' on your TV, phone, or tablet? Tracking down a streaming service to buy, rent, download, or watch the Karey Kirkpatrick-directed movie via subscription can be a huge pain, so we here at Moviefone want to help you out.

We've listed a number of streaming and cable services - including rental, purchase, and subscription options - along with the availability of 'Over the Hedge' on each platform. Now, before we get into the various whats and wheres of how you can watch 'Over the Hedge' right now, here are some details about the DreamWorks Animation comedy flick.

Released April 29th, 2006, 'Over the Hedge' stars Bruce Willis, Garry Shandling, Steve Carell, Wanda Sykes The PG movie has a runtime of about 1 hr 23 min, and received a user score of 65 (out of 100) on TMDb, which put together reviews from 3,405 experienced users.

You probably already know what the movie's about, but just in case... Here's the plot: "A scheming raccoon fools a mismatched family of forest creatures into helping him repay a debt of food, by invading the new suburban sprawl that popped up while they were hibernating – and learns a lesson about family himself."

Robots
Rodney Copperbottom is a young robot inventor who dreams of making the...

Madagascar: Escape 2 Africa
Alex, Marty, and other zoo animals find a way to escape from Madagasca...

Madagascar
Alex the lion is the king of the urban jungle, the main attraction at...

Meet the Robinsons
Lewis, a brilliant young inventor, is keen on creating a time machine...

Monsters vs Aliens
When Susan Murphy is unwittingly clobbered by a meteor full of outer s...

Bee Movie
Barry B. Benson, a bee who has just graduated from college, is disillu...

Shrek the Third
The King of Far Far Away has died and Shrek and Fiona are to become Ki...

9 Moments From 'The Sixth Sense' That Still Make Us Jump